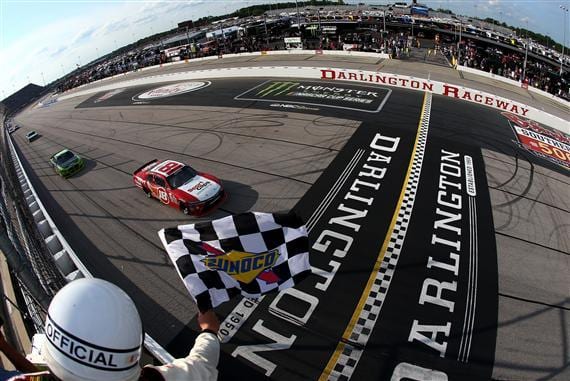 Monster Energy NASCAR Cup Series: Denny Hamlin Makes a Darling out of Darlington – Nobody, even the drivers, seem to understand why a certain track brings success to a certain driver.

Jimmie Johnson has Dover, Jeff Gordon had Martinsville. Why? “It just suits my driving style.”

For Denny Hamlin, a sweep of the weekend at Darlington Speedway puts him in the spotlight of top drivers at one of the sport’s toughest tracks. Perhaps it’s not too tough to tame for Mr. Hamlin.

“I don’t know what it is about it,” Hamlin said. “An unorthodox line helps. Every time I come back I learn something for the next time.”

Winning his second Southern 500, it continued a streak of 12 Darlington races where he completed every lap. No DNF, no accident, all finishes. Additionally, a thrilling XFINITY Series win Saturday brought an eighth straight top-two finish at Darlington.

The Lady in Black? She’s a darling to Denny Hamlin. – Zach Catanzareti

XFINITY Series: Denny Hamlin Toying with Competition at Darlington – When Denny Hamlin won the pole for Saturday’s Sport Clip Haircuts 200 VFW 200 at Darlington, he became the odds-on favorite to win the event. The Virginia native had top-two finishes in each of his last seven races at the Lady in Black, dating back to 2006.

Hamlin led the opening 31 laps before being passed by Kevin Harvick. Outside of falling back on one restart, starting from the inside, the No. 18 car was among the top five for the entire 147-lap race. But it was a late-race caution that saved his chances at conquering track track known as Too Tough to Tame.

With just over 10 laps remaining, a caution flew while Hamlin was ever so slowly gaining on Harvick for the race win. On that restart, he fell to third, but improved to second when a caution flew with five laps to go. When the race resumed, the No. 18 car made up for the bad restart earlier in the race from the inside, passing Joey Logano for the lead going into Turn 1.

Logano made a valiant effort going into Turn 3 on the final lap, but over-drove the corner, allowing Hamlin to get back by for the victory. The victory is Hamlin’s second triumph in four races this season.

With two races remaining until the postseason kickoffs at Kentucky Speedway, Brendan Gaughan holds onto the final playoff position, 20 markers ahead of Dakoda Armstrong. – Dustin Albino

Camping World Truck Series: Two Playoff Spots and One Race to Go – The checkered flag over the Truck Series’ lone road course race, which means only one race remains to the set the eight driver playoff field for this season. Austin Cindric added his name to the list with a win Sunday afternoon. He joins Christopher Bell, John Hunter Nemechek, Johnny Sauter, Kaz Grala and Matt Crafton as drivers with at least one win this year.

That’s where it gets a little more interesting. Chase Briscoe holds a 67-point lead over Ben Rhodes and mathematically can’t be knocked out unless he misses the next race for some reason (penalties aside). But for Rhodes, Ryan Truex, Grant Enfinger and even Noah Gragson, Chicagoland Speedway in a couple weeks marks the last chance to fill the eighth and final spot in the 2017 playoff field.

Drove with my tongue hanging out today. All for @TeamBKR @keselowski and everything they've done for my career. Special to get a W for them

Rhodes currently sits in that position but has just a seven-point cushion over Truex, who is on the outside looking in. Enfinger it 24 points back from Truex, while Gragson finds himself 47 markers behind the cutoff and in need of a win to make it in.

That’s where the all-important stage points can be a huge factor. Truex won the second stage at Mosport and has excelled this season on the mile-and-a-half tracks, making him a favorite at Chicagoland. But Rhodes has also seen his fair share of strength at the same tracks, including when he nearly won at Kansas until a blown motor ended that run. Gragson has shown similar performance throughout the season on the cookie-cutter tracks, and he proved on Sunday that he’s not afraid to be aggressive for track position. Meanwhile, Enfinger has shown steady improvement over the last few races and has run well on the mile-and-a-halves, too.

Obviously, a win for any of those outside the cutoff line ends Rhodes’ championship chances, and all of the drivers trying to snag the final spot have shown similar speed and performance on the mile-and-a-half tracks. Simply put, you can expect those looking to race their way into the playoff field will put it all on the line when the series descends on Chicagoland Speedway in a couple weeks. – Beth Lunkenheimer

Verizon IndyCar Series: Rossi Wins, Championship Battle Tightens at the Glen – Alexander Rossi started from the pole for the IndyCar Grand Prix at Watkins Glen on Sunday and earned his first victory since the 2016 Indianapolis 500.

Josef Newgarden entered the race with a 31-point championship lead over Dixon, and came away with a three-point advantage when the checkered flag waved. Newgarden crashed into the pit road wall while exiting during the final round of stops and was then plowed by Sebastien Bourdais from behind.

With a double-points event next, the Astor Cup could mathematically go to any driver in the top six in the standings, including all four Team Penske drivers and Rossi.

Sonoma Raceway is the final stop of the season. Two years ago, Juan Pablo Montoya lost the championship to Dixon at the same venue. Can Newgarden avoid the same fate? Will Dixon win a fifth title? Or can Castroneves get the championship that has eluded him throughout his career? – John Haverlin

Formula 1: Hamilton Masters Monza – Lewis Hamilton scored another masterful weekend, backing up last week’s run at in Belgium. Hamilton earned the pole in difficult conditions by driving a dominant lap after the session had been delayed over two hours. After getting a clean start to the race, Hamilton faced little in the way of competition and made the race look easy in capturing his 59th win.

Hamilton’s Mercedes teammate Valtteri Bottas came from fourth to place second, while Ferrari’s Sebastian Vettel overcame a poor qualifying effort, where he started sixth, and took the final place on the podium.

The field had been slightly jumbled through difficult qualifying conditions and grid-place penalties, allowing Lance Stroll of Williams to start second and Force India’s Esteban Ocon in third. Ocon finished sixth while Stroll managed to take seventh.
The overall drivers points standings now shows Hamilton atop by himself for the first time this season – clear of Vettel by three points, with Bottas 41 back.

One of the big stories to follow will be McLaren’s announcement as to who will be supplying their power units next year. There are reasons to believe that McLaren will be switching to Renault next year which would likely mean that Toro Rosso will become Honda’s new team. Much of this discussion is based on numerous speculations, which means it could all be folly.  – Huston Ladner

Sports Cars: What Is the Future of the WEC? – Good question.  If you ask the ACO, it has a bright future as a winter series.  Reportedly, the winter series concept is something that the ACO had wanted to have since the start of the FIA World Endurance Championship in 2012.  Porsche pulling out allowed the ACO to move up plans to institute the concept.  As announced Friday, the next WEC season will last 13.5 months (May 2018 to Jun. 2019), then subsequent seasons will start in the fall and run to Le Mans in June.

In reality, the future is rather unclear.  The FIA generally requires at least two manufacturers in the top class in order for a series to call themselves the world anything.  With Porsche’s withdrawal, there is only one.  There could be a name change for the series coming up soon.

2018 will see a grand total of four races.  They are Spa, Le Mans, Fuji and Shanghai.  There is an undetermined race that will be run in February of 2019.  Where that will be is anyone’s guess, but there are only a few possible choices.  The WEC generally only races on FIA Grade 1 circuits (Le Mans is the exception).  There are currently 36 Grade 1 venues, but a number of them are rather inhospitable for a February race.  The four Middle Eastern venues (Dubai Autodrome, Yas Marina Circuit, Losail International Circuit and Bahrain International Circuit) are likely candidates, along with Sepang Circuit in Malaysia since Formula One is leaving after this year.

Grandiose new proposed LMP1 regulations for 2020 were proposed less than three months ago at Le Mans.  Last weekend, the ACO announced that they’re going to be “heavily revised.”  Read that as “scrapped.”  The cost of the current LMP1-Hybrid regulations has chased manufacturers out of the WEC and kept others from entering.  The next year or so is going to be key to the future of the WEC. – Phil Allaway