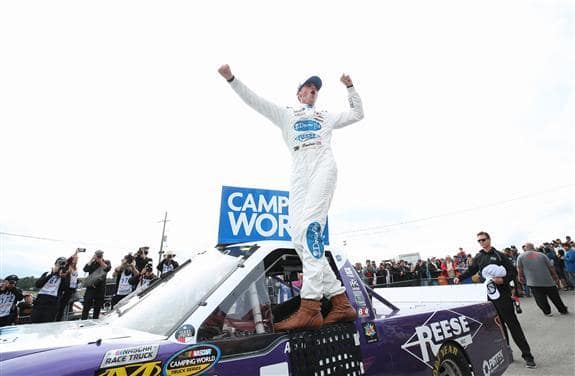 In a Nutshell: Austin Cindric started on the pole and emerged victorious Sunday afternoon at Canadian Tire Motorsport Park. The driver of the No. 19 Ford needed a win to make the playoff field, and after recovering from a pit road penalty under green, he dumped then-leader Kaz Grala, who ended up third, on the final lap en route to Victory Lane. Noah Gragson finished a career-best second, while Justin Haley and Ryan Truex rounded out the top five.

Who Should Have Won: Cindric started off his weekend leading one of two practice sessions before posting a blistering fast lap for his first career pole. Once the green flag flew, he made it clear he was the driver to beat, leading the first 31 circuits en route to his first stage win of the season. But a penalty for removing equipment from his pit box under green forced him down pit road and deep into the field. A trio of back-to-back restarts allowed him to move through the pack and eventually to second before he dumped Grala for the win.

Austin Cindric and Kaz Grala started Sunday’s race as the two to beat, running first and second, respectively for the entire first stage, while gapping the rest of the field by more than five seconds. But that’s not why the two will steal headlines early in the week.

On the final lap, Cindric chased Grala in a truck he knew he could win with. But when the pair approached Turn 5, Cindric ran straight into the back of Grala, turning the No. 33 truck. At that point, no one could catch him and the Brad Keselowski Racing driver went on to win and lock himself into the playoffs.

Of course, people came out of the woodwork on Twitter, criticizing the move.

Well that's one way to race……

But despite being dumped out of what would have been his second win in an up-and-down season, Grala kept his cool and was graceful when asked about the finish.

“That was a dump and run,” Grala said. “To be honest, I know he’s racing for a playoff spot and I get that, but he didn’t try to pass us even. He just got to us and ran us over. Last year, you can say what you want about the finish, but you know what? They finished 1-2. They were both going in the right direction.

“I don’t think he even braked for Turn 5. Honestly, I know he’s a great road course racer and I had a lot of respect for that, but I lost some right there because I wouldn’t race someone like that. I’d move them out of the way, especially with as much on the line as he had, but that was too dirty of a move. I can’t get behind that at all.”

“I gotta acknowledge what I did to Kaz Grala in Turn 5,” Cindric said from Victory Lane. “Everyone’s watched this race many years past; everybody knows it’s going to come to contact. I raced with Kaz growing up; I know they’re not going to be overly excited about it, but he already had a win, so I didn’t feel too bad about having to do something to make it happen for this team.

“I ran out of time. He did an awesome job on the tires he was on. He put me in that box; he was doing a hell of a job on old tires trying to stay out in front of me. That was the last resort I had.”

In the end, Cindric did what he needed to do to ensure he has a spot in the championship battle, however he’s also opened himself up to retaliation at some point during the playoffs. Truly, there is a difference between a bump-and-run and what the driver of the No. 19 Ford did on Sunday. I’m all for a little contact while racing for the lead, especially when it’s on the white flag lap. To flat out drive through a competitor without bothering to try to race for it is a dirty move.

With that said, don’t expect NASCAR to step in and penalize Cindric for dumping Grala, nor should it. The sanctioning body has made it clear in the past that contact when racing for position, and especially the win, is not only acceptable but encouraged. Cindric just needs to be ready for what may come his way over the next nine races.

Rookie of the Race: Austin Cindric

“We have two trucks that are capable for the playoffs at BKR. It’s exactly what these guys (pit crew) deserve and exactly what our sponsors deserve. Awesome to have these guys in Victory Lane, especially with the BKR tributes.” Austin Cindric

“The 19 (Austin Cindric) was pretty fast there at the end. I was giving it all I could. I knew I’m second, so just had a bad pit stop and I feel like it kind of hurt us a little bit. We just need a little bit more speed there at the end. I really wanted to win this race and I gave it all I could. Just unacceptable on my part. I was in the position where I had to win and I didn’t get the job done, so my guys they put a really good Toyota Tundra under me and just really bummed out. I just really wanted to win that bad.” Noah Gragson, finished second

“The last restart, I just got hung up with the 8 (John Hunter Nemechek) truck. I think I had a truck that could have at least competed for a win, especially when those guys were racing up there. I just lost too much time on the restart and couldn’t make it up. It was a strong run, we got a stage win and we’re proving we deserve to be in the Playoffs. I don’t know how all this is going to shake out. We’re a team that’s capable of putting up a fight for a championship and hopefully after Chicago we get to do that.” Ryan Truex, finished fifth

Going down fighting is one thing, not being given the chance to fight is another. "If u can't outrace em, dump em" is not in my vocabulary.

we will NEVER win a race giving up spots like that on pit road every week…. frustrating

Up Next: The Camping World Truck Series takes a weekend off before heading to Chicagoland Speedway to close out the regular season and solidify the playoff field. Coverage for the Chicagoland 225 begins Friday, Sept. 15 at 8:30 p.m. ET on FOX Sports 1; the race can also be heard on your local MRN affiliate or SiruisXM NASCAR Channel 90.

Zero respect for Cindric after that move. Just another entitled rich kid who got where he is via the genetic lottery. A dirtball low end move with no finesse, no grace, no skill, just a slam into the rear and off you go. Nothing to be proud of there.

Not much different than what Ryan Newman did to Kyle Larsen a couple of years ago in order to make the chase.

Both were deliberate and desperate moves, but it got them into the playoffs.

Not sure why people are surprised that this stuff keeps happening. Until there are repercussions for purposely dumping someone, then it will keep happening. Its up to Nascar to step in and police this. But they don’t have any interest because it keeps people talking about the sport and apparently fights and Twitter wars are what they prefer. So you can’t blame these guys for doing it, especially being put in the box they are with this idiotic playoff system.