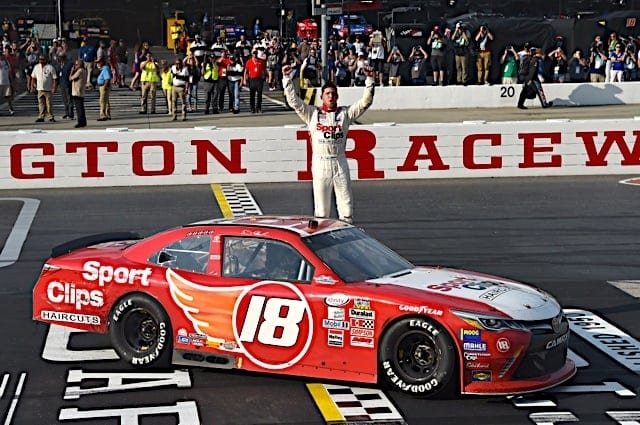 On Saturday morning Denny Hamlin scored his fifth pole at Darlington Raceway. Just a few hours later, though having to work for it, he put the “Flying” No. 18 car into Victory Lane for his fifth win at the famed racetrack during the Sport Clips Haircuts VFW 200.

Hamlin dominated early, leading the opening 31 laps before Kevin Harvick got by for the lead en route to winning the first stage. The No. 18 team fell to fourth in the waning laps of the 45-lap first stage. In the second stage, the Virginia native was runner-up, again to Harvick.

For the majority of the final stage, Hamlin was a second to third-place car, behind Harvick and Joey Logano. But a Dakoda Armstrong spin with 11 laps remaining gave the field another shot at the No. 41 car.

Both Logano and Hamlin cleared Harvick on the resuming restart, but then the final caution of the day came out with five laps to go. On the final restart, from the inside, the No. 18 car cleared the No. 22 machine, and held off Logano, though he had a dive bomb going into Turn 3 on the final lap, only to overdrive the corner, allowing Hamlin to get back by for the victory.

The crossover move by Denny Hamlin! He WINS at Darlington Raceway! pic.twitter.com/14IGnu3YEd

“I didn’t anticipate the [No.] 22  getting back to us like that, but he did and hats off to them and they didn’t have probably the fastest car, but they had great pit stops all day and put themselves in position and then I knew going down the backstretch that he was going to have inside position,” Hamlin said. “It was up to me then to back up the corner, let him slide up the race track and slide back around him on the exit, so it takes a lot of patience.”

Dating back to 2006, Hamlin has competed in eight XFINITY races at Darlington. In each of those races, he has come home with a top-two finish, and every time he sat on the pole, he went to Winners Circle.

Whenever drivers need tires before they need to pit for fuel, the racing gets two thumbs up for me.

And though in this case the stages were too short, and there were too many cautions for pit strategy to play dividends in the finishing order, tire management became key.

None of the teams got through all five sets of tires that were lying in the pits, but it led to key moments of the race. Following the conclusion of the second stage, William Byron restarted in the back after making an additional pit stop for a loose wheel. In the 57-lap sprint to the finish, which saw a trio of cautions, the No. 9 team rounded out the top five. Even just a few extra laps under caution, and catching some lucky breaks granted the rookie his eighth top-five finish this season.

Tire management will be more crucial in Sunday’s Southern 500, but this race still had its fair share of moments, which leads to the bad.

On lap 10, Ty Dillon got loose coming off Turn 2, racing close corners with Elliott Sadler. The No. 3 car had one of the saves of the year, as nobody hit him, spinning from the third position in what looked like a long, never-ending spin.

But what happened after is down right wrong.

The No. 3 team, led by crew chief Matt Swiderski asked NASCAR for an additional set of tires, since the set that Dillon started the race on had only six green flag laps and all four tires were scuffed. NASCAR granted them an extra set.

Now, maybe this is just me, but what!? Rules are rules, and NASCAR should have stuck by them regardless of when a team spins. Sure, it was really early in the race, but each team had five sets of tires, which would give no driver a distinct advantage. But it sure as hell gave the No. 3 team an advantage since they gained an extra set.

Dillon drove the wheels (no pun intended) off the car, finishing third in the opening stage. But if it weren’t for that new rubber that had nine less laps than the other 39 teams, would he have driven up that far? Probably so because he would have put on new tires regardless, but both Jeff Burton and Steve Letarte, broadcasting the race for NBC Sports could not comprehend why NASCAR gave the No. 3 crew an additional set and neither can anybody else.

Rules are rules, stick by them, NASCAR.

Coming to complete the opening lap of the race, Matt Tifft got loose and was tagged by Ross Chastain spinning the No. 19 car into the inside wall. The rookie drive was none-to-pleased.

Going back to the finish of last weekends race at Road America, Tifft has been dumped twice in the last three laps of XFINITY competition for himself. He was spun by Jeremy Clements for the victory last week, and this week, he didn’t make it to the conclusion of the first lap.

This one stung more, as Tifft’s race ended before it even began.

“There’s tight racing, but taking the first lap, you don’t get expected to get taken out,” Tifft said of the incident. “I was in the high lane minding my own business and I just got taken out coming to the second lap. It’s frustrating. Honestly, I thought we had a good chance at a top five to top 10 run today, but unfortunately we never got to see it. I can take getting spun for the win at another race, but man, first lap is a tough pill to swallow.”

Entering the race, Tifft had a 98 point advantage over the playoff bubble. With the 40th place result, the No. 19 team luckily only seven points.

??…
Thanks to all our guys for the hard work. You better believe we will be ready for Richmond

When Cup Series stars, and affiliated teams make up over half the positions in the field, 20th-place is hard to come by for small race teams. However, on Saturday, Brandon Brown was running with the big boys throughout the entire race.

The Coastal Carolina student started the race in 31st position, quickly working his way into the top 25. At one point, he was battling with a few of the Cup Series drivers and in front of XFINITY Daniel Hemric and Byron inside the top 15.

Through the final portion of the race, the No. 90 car fell to 24th. But with a series of late race restarts, Brown finished the afternoon in 20th position, his first shot at the Lady in Black.

This marks Brown’s second top-20 finish of the season as he placed 17th at Dover International Speedway in June. Running in 11 races over the last calendar year, the 23-year-old has eight top-25 results, two of which came from his family-owned race team, the other six for Mario Gosselin.

How about that @CCUChanticleers Junie D paint scheme that @BrandonBrownRac is wheeling??

Hamlin picked up his fifth victory at the track Too Tough to Tame, while Logano came home runner-up.

Had it not been for an awful restart with 11 laps to go, Harvick might have been the one celebrating in Victory Lane, as he led 54 circuits, sweeping the first two stages.

“We want to win every one of them and we just got out-motored.  He went through the gear box and got position on me and off he went.” – Joey Logano

“It just didn’t wind up working out there at the end.  I wound up on the bottom and I kept my foot in it over there, got loose underneath the [No.] 20. It wound up being a great race and that’s all you can ask for.” – Kevin Harvick

Another race where Cup Series drivers compete, another obliteration from the experienced drivers. This came off the heels of an epic race at Road America that saw no Cup drivers in the field.

Let this sink in: Morgan Shepherd led a pair of laps under caution, the most laps an XFINITY driver led throughout the race. Sadler led one during a cycle of pit stops under the yellow flag. 145 laps to the Cup guys, three to XFINITY.

Clements, Road America victor, is sick of it.

“The problem is they’re in top-dollar equipment,” Clements said Friday at Darlington Raceway. “[People say]It’s good for you to race them, it makes you better.’ I’m like, ‘Well half the time they’re so much faster, it doesn’t make me better when they fly by me. I don’t know what I’m learning from that.

“I don’t blame the Cup guys; I would do it, too. I’m just saying give us a chance. I mean who wants to watch that, honestly?”

Next weekend at Richmond Raceway marks the penultimate race of the XFINITY Series regular season. Kyle Busch is the defending winner, leading 197 of 250 circuits. The 2009 champion is slated to make his final XFINITY start of the year next week, and has been triumphant in four of the past five races he’s competed in this season. The Virginia529 College Savings 250 is scheduled to begin on Friday, Sept. 8 at 7:30 p.m. ET.

….Well Denise he did lead the most laps…LOl. And you comparing yourself to DALE SR. TSK. TSK. TSK. WOW!!!!!!!!!!!!!!! Anywhoo, kiddie series. Did not watch, heard the hype after..clicked on YOUTUBE saw the last restart clip. Good racing, nothing more nothing less. Now watch the way they are talking up this kiddie series race (so far) they might put it up there with the incomparable Craven/Busch wonderful finish. These “writers” are truly desperate, imo.

Seeing the reference to Mike Duvall made me think of the Flintstone Flyer that I saw running down south, in the NDRA I think. They should have had the Flinstone Flyer on the trailer but I don’t think seeing Hoosier dirt tires on a car would have gone over too well.

Every week the “ugly” should be Cup guys stinking up the show. Who really finds this entertaining? And these writers keep talking about how the series needs to be propped up, but the 2 quotes you use for the article are both from Cup drivers. Coming off the heals of a great finish the week before, when will people realize what the issue is with this series. Its right in front of everyone’s face, but nobody wants to do anything about it. Until they do, I will continue not to watch this series. Its not worth my time.

I think Jeremy Clements put it perfectly, what good does it do to race against the cups guys when they are flying by you. Its not the cup drivers themselves, its the cup teams that stink up the show. You have teams like JGR that have hundreds of employees and multi million dollar sponsors competing against family owned teams like Jeremy Clements and Ryan Sieg that have a handful of employees and most of their sponsorship comes from local companies. Let Jeremy and Ryan switch equipment with Denny Hamlin and Joey Logano and see who ends up on top.
BTW, I mean absolutely no disrespect to Jeremy and Ryan’s teams. They do a great job with the resources they have. More power to them.