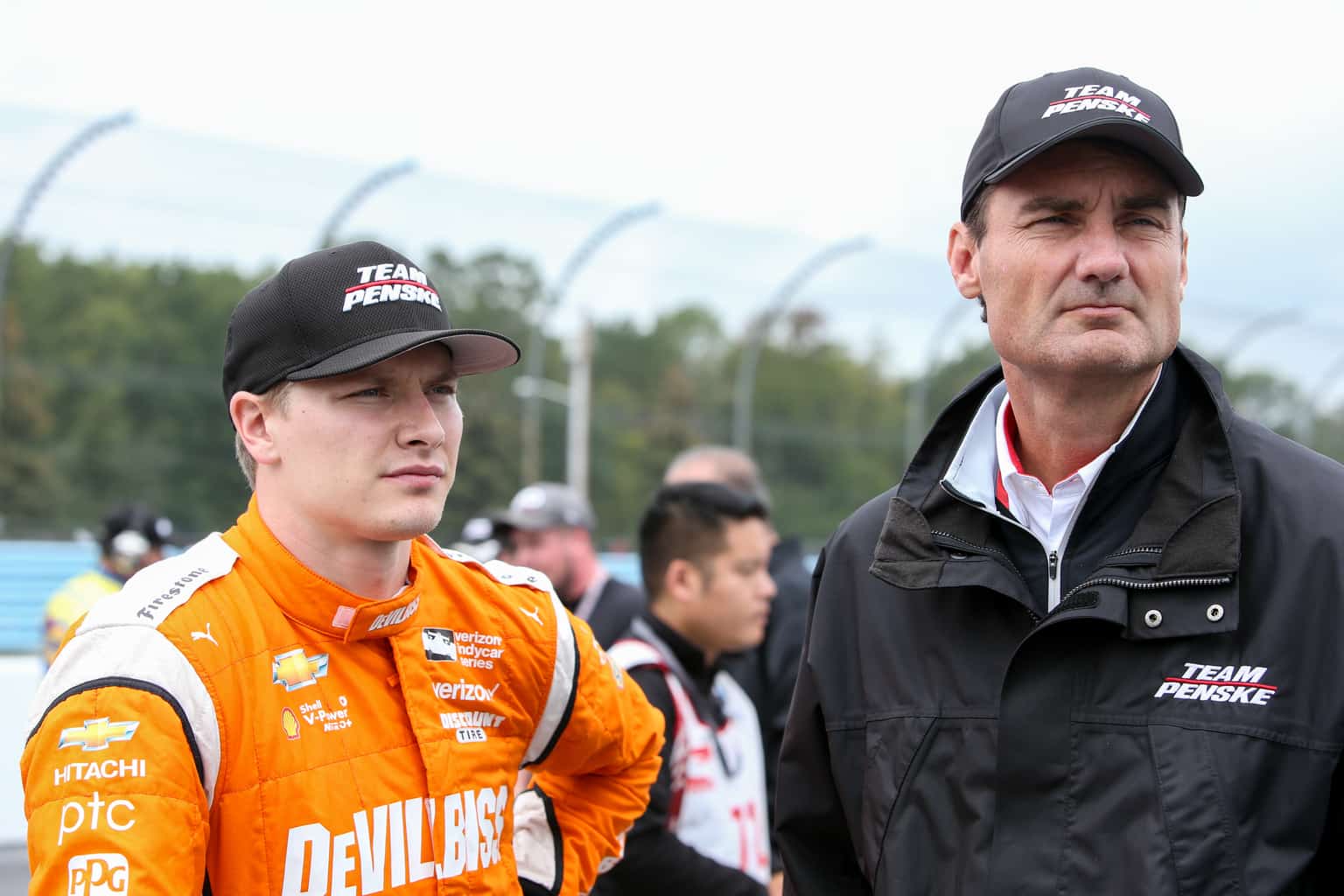 Josef Newgarden finished 18th in the IndyCar Grand Prix at the Glen on Sunday after an accident with Sébastien Bourdais while leaving pit road, but nonetheless maintains a three-point lead over four-time champion Scott Dixon in the standings.

Newgarden was racing Team Penske teammate Will Power off pit lane during the final round of stops when he exited with too much speed and hit the retaining wall that leads to the track. After making contact with it, Bourdais plowed into him, and both cars were damaged.

Newgarden finished two laps down while Bourdais finished 17th as the last car on the lead lap.

“I felt like we were in a good position until that final pit stop. No excuse for it. It was my fault,” Newgarden said. “I saw Will leave right in front of us and I just locked it up and slid over into the wall. Then Sébastien got into the back of me.”

The Penske driver lost 28 points in his lead over Dixon but is still atop the standings with one race left. Also among the drivers still mathematically alive in the title hunt are Hélio Castroneves, Simon Pagenaud, Power, Watkins Glen winner Alexander Rossi, and Graham Rahal.

With the finale at Sonoma Raceway being a double-points event, having a strong performance at the Northern California road course becomes exceptionally crucial.

“I think you just have to treat next week as another race,” Dixon said. “I think you can’t overcomplicate it. Obviously, we want to win it. There’s a lot on the line. But, you know, I think if you overthink things too much, then it ends up being a very bad thing.

“I’ve never raced Josef really in a championship like this. It’s not just the two of us. … Hélio is through, Pagenaud is still there as well. With double points, you can have a pretty hefty swing, as we found out last year.

“We’ll take it as it comes. … Anything can happen, as we saw today.”

When Dixon won his most recent championship in 2015, he entered the season finale third in the standings, 47 points behind leader Juan Pablo Montoya and 13 behind Rahal.

Dixon won that race and Montoya finished sixth, which created a tie for the top spot in the standings. But since Dixon had one more win than Montoya, he was given the Astor Cup.

That scenario is entirely possible again, but with a third of the field still eligible to win the title, it could be a dramatic race between more than just two drivers. It might be reminiscent of NASCAR’s Championship 4 race at Homestead-Miami Speedway, where the best-finishing playoff contender is deemed the champion.

So as Newgarden and Dixon occupy the top-two spots, Castroneves, who’s third in the standings, looks to win the first series championship of his career.

“I feel really bad for Josef with his incident. It’s unfortunate for the team, but it’s mixed feelings for me because it tightens up the championship,” the three-time Indy 500 winner said. We definitely have a good chance heading into Sonoma, and I feel really good about our setup there. We’ll be ready to go for it and finish strong.”

Pagenaud and Power, who are fourth and fifth in the standings, respectively, had a head-to-head fight going for the gold last year. Pagenaud entered Sonoma leading the standings, won the race, and earned his first career championship.

“We come out of Watkins Glen still in the hunt for the championship,” he said. “We know what it takes to win at Sonoma, and that’s what we’ll be fighting for.”

Power has finished runner-up in the title four times in the last seven years. He won the 2014 championship and hopes to get a second one in two weeks.

“I don’t know what kind of legitimate chance at the championship I have, but stranger things have happened, I guess,” the Australian said. “We’ll go to Sonoma and give it everything we have.”

With all four Penske drivers and Chip Ganassi Racing’s Dixon all in it, the series winner will likely be the one that has a flawless performance at Sonoma.

Newgarden is in an unusual position. He’s in his first year with Penske, beating all his veteran teammates, and one of the best drivers IndyCar has ever had in Dixon. That’s something very few could accomplish. He had a bad day at the Glen but is still in the catbird seat.

Maybe he got all the bad luck out of him on Sunday and will win at Sonoma. Maybe Dixon earns No. 5. Maybe Castroneves gets No. 1. Maybe Pagenaud repeats. We’ll know the answer in two weeks.