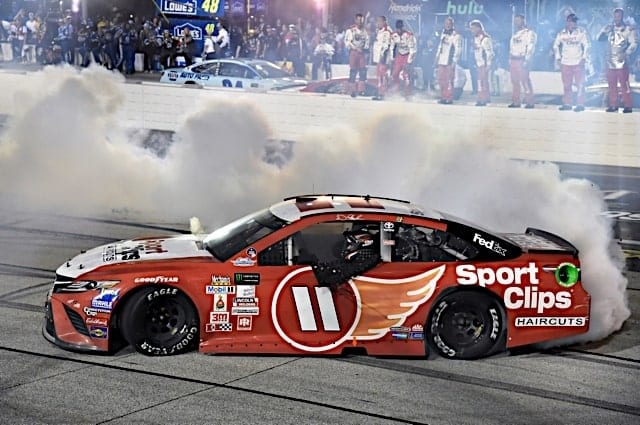 The shout-out of the race has to go to Austin Dillon. Dillon finished fourth after running in the top 10 almost all night long, for just his third top-five finish of the season. It was also his first top five since his surprising victory in the Coca-Cola 600 in May.

It tops a great night for Richard Childress Racing. Ryan Newman’s seventh-place finish in addition to Dillon’s fourth will give the two RCR cars some momentum heading into the playoffs, as long as they can build off of this weekend.

In just three years since its return to Labor Day weekend, the Southern 500 has regained all of the prestige it once held and then some. Part of the mystique is due to the retro throwback marketing, but there’s more to this cake than just the icing. This race may have been the best of the year, with plenty of action, strategy, and drama in just the final 100-lap run alone. That was all the evidence that anybody will ever need when somebody argues that green flag racing can’t be great racing.

Some may just look at this race and ask, “Why doesn’t the series race here in the spring?” or “this track needs a second date.” By principal, I can’t advocate for a second Cup date here as I don’t think any track outside of the short tracks deserve a second date.

But if Las Vegas Motor Speedway, the most generic racetrack in NASCAR is getting a pair of triple-header weekends starting next season, why can’t Darlington get a second race? Darlington is such a special, unique racetrack that it would be fun to see the spring race be revived again. And hey, the second-to-last time there was a 400 mile spring race at Darlington, we had the greatest finish in NASCAR history take place (Craven vs. Busch). It wouldn’t be the worst thing in the world if NASCAR just forgets to go to Kansas Speedway in May and instead heads down to Darlington.

Why… did Denny Hamlin win?

Darlington has always been hell on Earth when it comes to tires, and Sunday was no different. Denny Hamlin was able to close the gap on Martin Truex Jr. in spite of missing pit road on the final round of green flag pit stops just due to pitting laps after Truex, but the clincher happened when Truex blew a right front tire heading into Turn 3 with just three laps to go, allowing Hamlin to pass him on the bottom.

And even then, Hamlin’s Toyota was just faster than Truex’s at the end of the race. Truex had an amazing long run car as he usually does, but fresher tires will always trump long run speed. Hamlin unloaded quick, and maintained speed all weekend across both the Cup Series and the XFINITY Series, so there’s not much surprise that he ended up winning both races.

Still, though, at the end of the day, Truex clinched the regular season championship (and the 15 playoff points up for grabs in the process) and won both Stage Nos. 1 and 2. The more Truex adds onto his already massive playoff point lead, the harder its going to be for the rest of the field to knock him out of the playoffs.

Where… did the pole-sitter end up?

Kevin Harvick led the first 18 laps of the night, but was never able to recover the lead again outside of a single lap led under caution and three laps during the final pit cycle of the race. Still, though, the driver of the No. 4 Busch Ford came home with a solid ninth-place effort, the first car one lap down.

How… is the playoff race shaping up?

Entering the regular season finale at Richmond Raceway, the playoff race has become very clear. As long as there are no new winners or Joey Logano at Richmond, the final three drivers entering the playoffs will be Chase Elliott, Matt Kenseth, and Jamie McMurray. However, if a playoff eligible driver wins the race that are not among the 13 already in, this becomes really close really quick. Elliott leads Kenseth by two points and Kenseth is ahead of McMurray by just one marker.

And there are still plenty of drivers with a solid chance to pull a Jeremy Mayfield and steal a playoff spot with a win. Chief among them may just be Erik Jones, who heads into Richmond with a lot of momentum and in a Toyota, which has dominated most Richmond races in recent memory. Logano ended a miserable summer in 18th at Darlington and needs to pull off a sweep after winning the spring race at Richmond. Finally, Clint Bowyer had been in the playoffs for just about the entire season before a blown engine and a 40th at Darlington knocked him out of contending to get in on points; now he will have to cap off his comeback season with a win to get in.

Who… had the best throwback paint scheme?

This year kind of seemed a bit lacking in throwback paint schemes compared to last year, but the gimmick is still just as great as it was when it was introduced two years ago.

Let me get this out of the way first: the Furniture Row Racing cars are either not throwbacks or they are throwbacks flatter than a 68-year-old can of soda. This year, Truex ran the not quite Dale Earnhardt Sr. car because he just did, and Jones had a bunch of rookies on the car because he’s a rookie. That makes sense, right? Why not have Truex run a throwback to his old DEI Bass Pro Shops scheme and have Jones throwback to… something? I’d rank the cars that didn’t run a throwback like the Busch brother’s over these two, just because at least they aren’t lying about not really throwing back.

Another thing that gets on my nerves is when a team is too lazy and reuses the throwback from the year before. Looking at you, Brad Keselowski and Ty Dillon. The Wood Brothers throwback kind of sucked just because it wasn’t as good of a throwback as their usual paint scheme.

I’m a sucker for Bobby Allison schemes, so Matt DiBenneditto’s 1988 throwback got points from me, but the best throwback this year had to be Jimmie Johnson’s. It’s the perfect example of how the best throwback schemes don’t have to be constricted to just old racecars; this was just a really cool paint scheme to see on the racetrack.

Yeah, moving a race from a short flat track to the boring cookie cutter at Vegas was just stupidity at its finest. But we’ve come to expect that from Nascar lately, starting with the idiocy of the Chase, now the double down idiocy of stage racing. Meanwhile, fans vote with their wallets and walk away in disgust and the big heads at Nascar just can’t seem to see cause and effect. As a long time stock car racing aficionado who has followed Cup since the 60s it is sad to see the circus it’s become.

A second race at Darlington! What a rebel idea!

Point of information. Keselowski did not re-use the same throwback this year as last year, or even the year before that. He ran a paint scheme in 2016 that resembled the original Miller Lite label from I believe back in the 70s. In 2015, he ran the red and white Miller High Life paint scheme that mirrored that of Bobby Allison ran in the early 80s.

He DID however, run the MGD scheme at Michigan in 2015 as a part of the 25th anniversary of Penske and Miller Brewing.

I liked the #5 throwback to the Levi Garrett that Geoff Bodine drove. I think TV avoided the #5 like the plague because it was a tobacco related throwback. They highlighted every throwback scheme except that one.

I think the throwback idea should be expanded – how about throwback race tracks, rules packages, points systems, and body styles!

The only true throwback schemes were the 2 car (MIller) and the 43 car (STP). They had the actual sponsor as well as the original paint schemes.