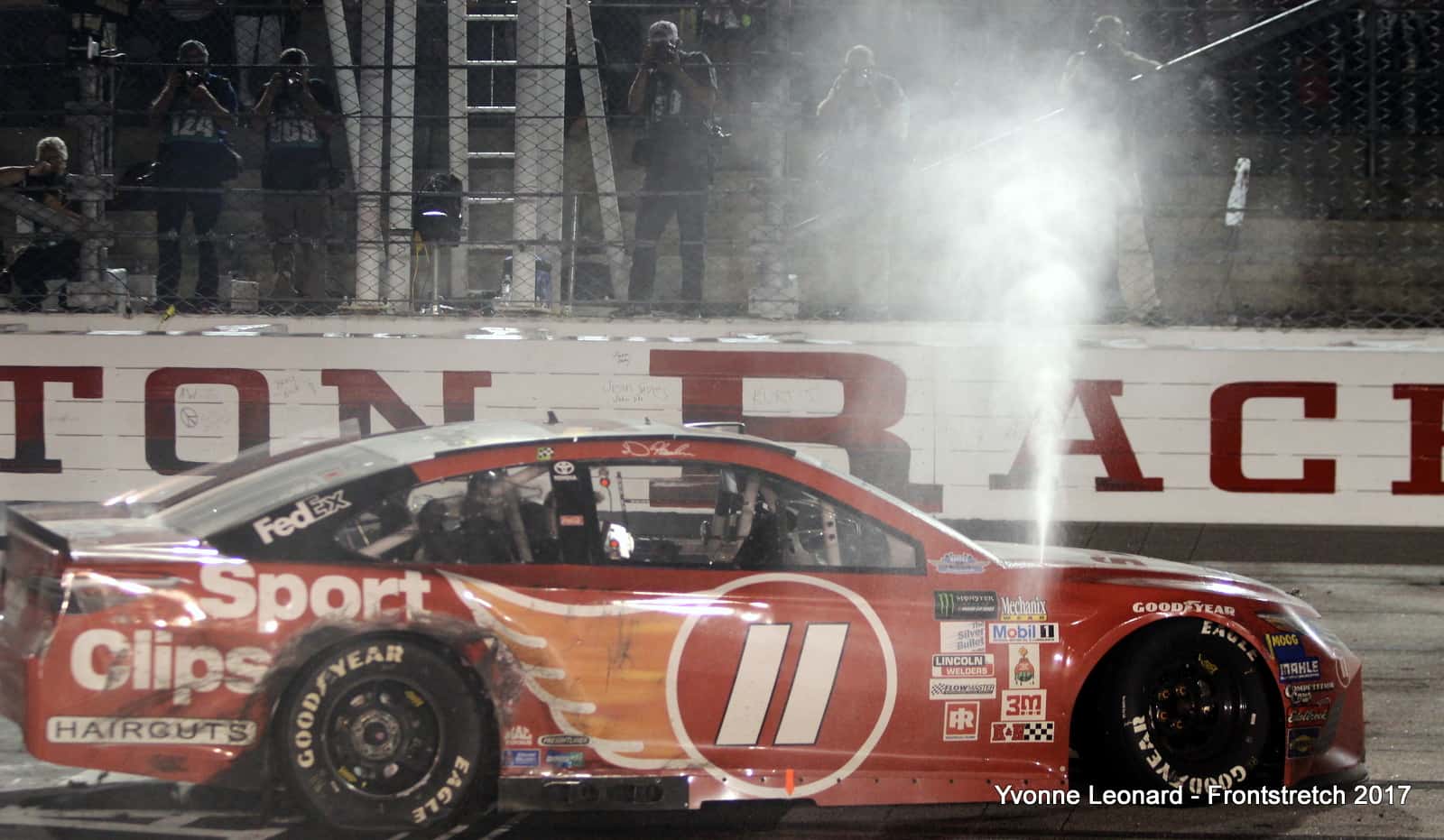 NASCAR announced Wednesday afternoon (Sept. 6) that the No. 11 Joe Gibbs Racing team has been handed an L1-level penalty following the race last weekend at Darlington Raceway.

The team violated sections 20.14.2 (rear suspension) of the NASCAR rule book, which states that “I-4 f Truck Trailing Arm Spacers/Pinion Angle Shims. Spacers/pinion angle shims must conform to the following drawing: A-008- 01016d-16 REV. A. Notes: 6 The Truck trailing arm spacer / pinion angle shim mating surfaces must be planar and must be in complete contact with corresponding mating surfaces at all points and at all times.”

Crew chief Mike Wheeler was fined $50,000 and suspended for the next two points races (Richmond Raceway and Chicagoland Speedway). The team was also docked 25 owner and driver points, while Denny Hamlin‘s victory was encumbered.

This penalty was last seen in the Monster Energy NASCAR Cup Series following the Overton’s 400 at Pocono Raceway earlier last month with Erik Jones and the No. 77 Furniture Row Racing team.

There is no word on if the penalty will be appealed or not at this time.

Additionally, he No. 88 Hendrick Motorsports team received a safety violation penalty for lug nuts not properly installed following Sunday nights race. Crew chief Greg Ives has been suspended for this weekend’s race at Richmond along with being given a $20,000 fine. Hendrick Motorsports said in a statement this afternoon that the organization will not appeal the penalty. Travis Miller, the current No. 88 car chief, will serve as the interim crew chief.

In the NASCAR XFINITY Series, the No. 18 Joe Gibbs Racing team failed post-race inspection after violating sections 20.14.2 (rear suspension) of the rule book. The team was given an L1-level penalty, and crew chief Eric Phillips has been suspended for the next two points-paying events (Richmond and Chicago) and received a $25,000 fine. The team was fined 25 driver and owner points, while Hamlin’s victory in the race Saturday was encumbered.

Meanwhile, the second-place-finishing No. 22 Team Penske Ford Mustang also failed post race inspection for violating sections 20.14.2 (rear suspension) of the rule book. Greg Erwin has been fined $25,000 and suspended for the next two points-paying events (Richmond and Chicago). The second-place finish was also encumbered

Hahaha, good job of cheating Henny Damlin. No wonder he was able to miss pit road, fall back and then catch what had been the dominant car most of the day, he cheated.

No playoff points for you! Next!

God dammun, this sport is a piece of work. SMH.

On Saturday the 18 crew thought Kyle was in the car and needed the help to win.

The “W” needs to be taken away and awarded to the next highest legal finishing car. Even King Richard had a overbored engine at Charlotte back in the day. So it also leaves an asterisk beside the number 200 wins. I don’t like to call the driver himself a cheater because we don’t really know if the driver knows he is driving a cheating car. I would bet brother Maurice knew but never told Richard until after the fact..

I’ll be betting there will be an appeal, but there probably won’t be a reversal unless there is a Toyota bias from the panel. I wonder if Reverend Joe has an ally like Mr. H has.

Was going to say just disqualify the cheaters and move on. Then, hold on, how would that work with sponsor contracts, big money ad buys and TV?
So, never mind.

Its quite sad that a Cup team needs to trick up a car to win an Xfinity race. Like they don’t already have a big enough advantage. Guess Denny didn’t back it into the wall hard enough during the post race celebration.

I always wondered how the 18 car dominates week after week in Xfinity and still passes inspection. Maybe nascar is finally on to them.

Maybe Kyle needs the help. He was caught cheating in his Super Late Model. Makes on wonder about the Snowball Derby car. When Erik beat him maybe Kyle didn’t cheat enough.

Question: Do the crew chiefs really pay the fines? Isn’t that a joke? Wouldn’t that make a good story?

NASCAR has systematically created a rule book full to capacity with ways to manipulate race results in whatever direction they need it to go…it’s blatant, and it’s pathetic.
Brian France…you have destroyed NASCAR, leave and don’t come back.