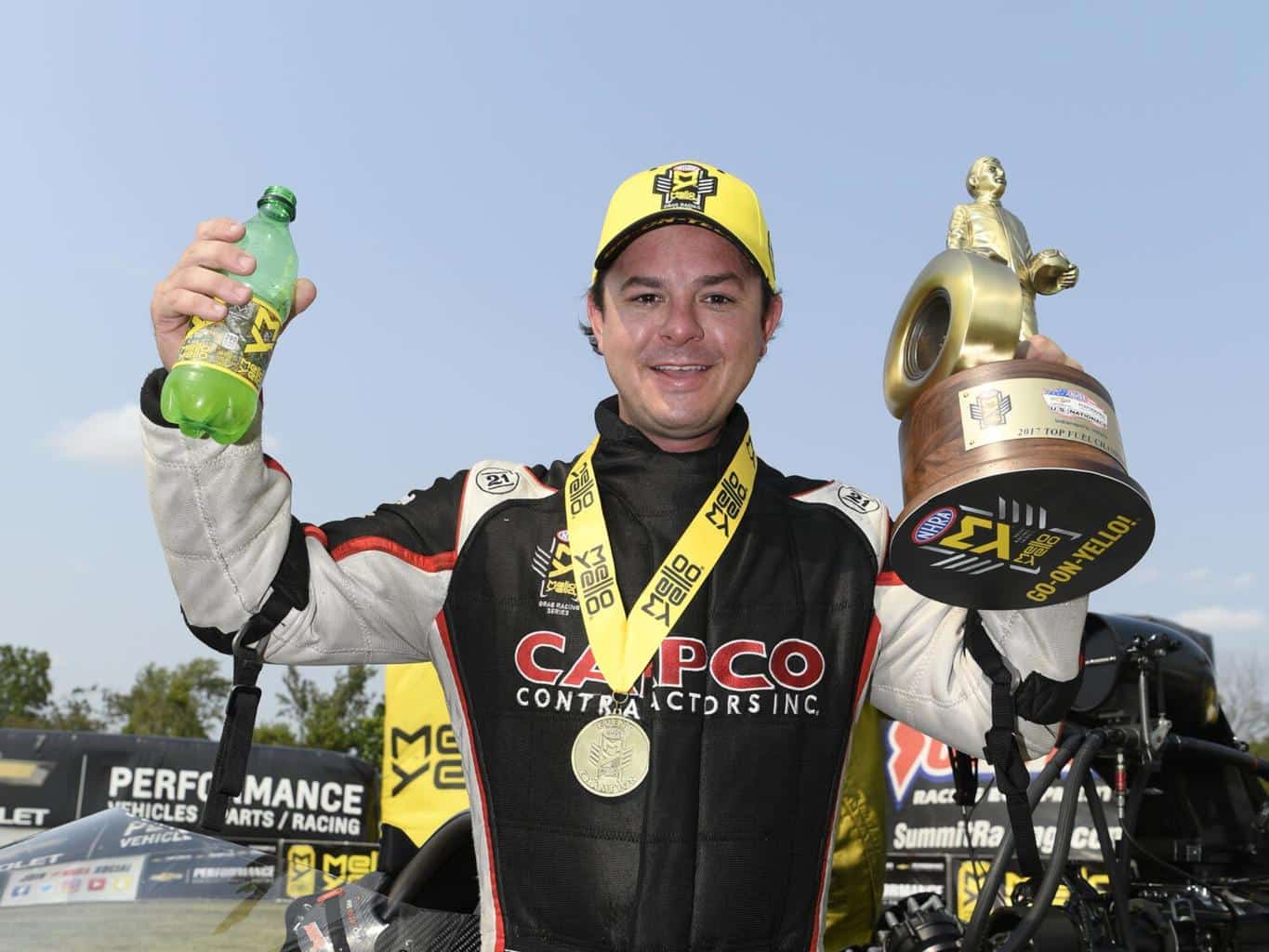 Three-time U.S. Nationals runner-up Steve Torrence finally broke through to collect his first-ever victory in The Big Go with a final-round victory over Kebin Kinsley in the Top Fuel final at Lucas Oil Raceway in Indianapolis.

Torrence laid down a 3.757-second pass at 322.96 mph n the final round to pick up the win over Kinsley, who went up in smoke right at the green light in his first career final round appearance. Torrence’s win was his seventh of the season and 15th of his career.

“This is surreal,” Torrence said. “I don’t even know if I’m realizing what’s going on right now. You come to Indy and you race for a week. This is our biggest race. This is what we race our careers for, is to try and win Indy and it’s a marathon. I’m wore out. Unless you’re a racer and in this situation, I don’t think I can explain the feelings that you get. This is us winning the biggest race of our sport. I said this the other day, you can win a bunch of championships but if you don’t win Indy then you haven’t really done much. So, we’ve won Indy.”

Indianapolis native J.R. Todd collected his second Funny car win of the season and his first-ever at his hometown track, besting Ron Capps in a tight race, going 3.949 at 325.53 mph against Capps’ 3.923 at 325.61 to win by half a car length.

“This was where it all started for me in Jr. Dragsters,” Todd said. “I remember watching Capps as a kid and now I raced him in the final round of Indy. It’s too surreal. Like Torrence said, you win Indy and you know you’ve beaten the best in the sport. Ron Capps and those guys out there are the best in the sport.”

Drew Skillman rounded out the first-time U.S. Nationals winner with a victory over six-time Indy winner Greg Anderson in the Pro Stock finals. The Indiana native posted a 6.676 pass at 206.61 mph to defeat Anderson, who ran 6.660 at 208.01 and came up about four feet short of the victory. It was the fourth win of the season for Skillman and the seventh of his career.

TORRENCE DOUBLES UP AT INDY

Torrence defeated 10-time Indianapolis winner Tony Schumacher in the invitation-only race-within-a-race featuring the Top Fuel points leader, the six Top Fuel event winners so far this season, and an either driver voted in by the fans.

“This is just the icing on the cake; to go to Indy and be able to race in the Traxxas Shootout,” Torrence said. “This is an unbelievable deal. When you come out here and you race for 100,000 grand and it’s a race-within-a-race, the competition level is at its highest. It’s the baddest eight guys in drag racing and when you go up there you have to bring you’re a-game every lap and we were able to come out with a win.”

“Just getting in to the Shootout is incredibly difficult,” Beckman said. “That’s what makes it exciting, there’s a big litany of ways to make your way into the field but then there’s only one way to get the trophy: You’ve got to beat three of the baddest fuel cars on the planet in one day. There’s always something that makes this Traxxas final round eventful.”

The NHRA announced a contractor extension with Coca-Cola as the title sponsor for the Mello Yello Drag Racing Series through 2023. Coca-Cola has served as title sponsor of the NHRA through its various brands since 2001, first with Powerade, then Full Throttle Energy drink, and with Mello Yello since 2013.

“The Coca-Cola Company is an important part of the continued success of NHRA drag racing,” said NHRA President Peter Clifford . “Over the past 16 years working with The Coca-Cola Company, we’ve witnessed firsthand the organization’s dedication to its mission to offer refreshment and inspire happiness. Our fans, drivers, teams and partners love the ingenuity that this relationship continues to drive.”

THE COUNTDOWN IS ON

Fox televised it live on Monday afternoon from 1-4 (even went past 4) on their main network. Tells Brian all he needs to ignore.