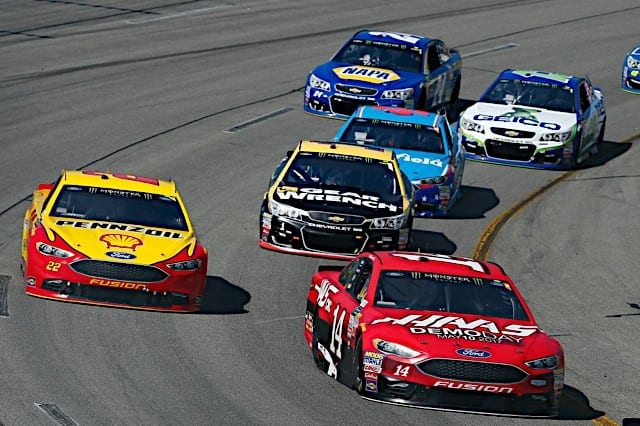 Will Anyone Will Their Way Into the Playoffs?

Simply put, there are some drivers who can’t play nice, not anymore. These are the racers who are outside the playoff grid entering Saturday’s Federated Auto Parts 400. And in 2017, that means a must-win night is in order.

That’s because the closest contender to 16th-place Jamie McMurray is 91 points off, well beyond the mark of pointing your way in. So the goal is to simply win.

But will anyone do it?

The first handful of names outside aren’t completely crazy names to put on your DraftKings fantasy lineups by any stretch. Clint Bowyer, who populates that 17th spot, has found solid success at Richmond Raceway. He won there in 2012 and backed it up with a runner-up finish in ’13. In those two races alone, he led 201 laps at the 0.750-mile track.

And short tracks have been somewhat nice to Bowyer this year, as one of his three second-place finishes came at the half-mile of Bristol Motor Speedway in April.

The next in line may be the best bet based off recent performance: Erik Jones, who is running a streak of three straight top-five and five straight top-10 finishes. Among these was Bristol, where he led 260 of 500 laps en route to second place. Though he may have peaked too late, he has one more shot to get that win.

The final couple is Joey Logano and Daniel Suarez, two drivers who have combined for just two stage wins in 2017 and have seen a lack of consistency deprive them of playoff spots. For Logano, of course, Richmond was his best and worst race of 2017, getting the race win that was later called encumbered and stripped of playoff eligibility.

Suarez has seen the best and worst of his rookie season in the last two months, running a streak of four straight top 10s from New Hampshire Motor Speedway to Watkins Glen International and crashing out of two of the last three races since. The dip puts Suarez 19th in playoff points.

Beyond these men, only a remarkable victory can pierce the playoff group. Aric Almirola gave it a shot in 2015, as did a plethora of drivers in 2013.

Are We In for a Night of Thrills at Richmond?

In a sport that has only three short tracks a season, it’s only right to match one of them with one of the biggest weekends of the year: the final race of the regular season.

Since the debut of the playoffs in 2004 as the Chase, Richmond Raceway has been the last-chance qualifier every year, giving outside hopefuls 400 laps to save their subpar seasons.

Despite the perfect blend of risks, rewards and track size, Richmond hasn’t always created a show worthy of such hype. In fact, the fall race has struggled heavily more times than not.

In 2015, Matt Kenseth led 352 of 400 laps en route to the win. That night, there were only six cautions. And besides Almirola’s hearty fight for the win late, the race also didn’t have significant changes in the playoff standings.

The year prior had a similar dominance by Brad Keselowski, who led 383 laps in a race that had only four yellows. Besides that guy who climbed the fence with 69 laps to go, not much to remember that night either.

Now, calling a race good or bad usually comes down to personal preference. However, by many accounts, a driver leading 95.7 percent of a race will likely result in a poor rating.

2016 was a major improvement in the area of dominance, as seven drivers led the event, with Kyle Larson and race winner Denny Hamlin nearly splitting the race up front (Hamlin’s 189 laps led to Larson’s 193.) Additionally, it broke the streak of quiet nights in Virginia, with 16 cautions, a track record that tallied more than the previous three fall races combined.

Richmond may have two races a year, but they’re often approached differently, with the spring event usually one of the hottest of the year while the night race is another story entirely. So with little to take from the spring event and a change of pattern one year ago, will the drivers play nice come Saturday night?

Will Justin Allgaier Redeem Himself at Richmond?

Phoenix International Raceway may have been where Justin Allgaier reached Victory Lane in the 2017 XFINITY Series, but his best race may have come elsewhere.

Last time out at Richmond for the series, Allgaier had his best race in terms of laps led, pacing 157 on the day. In fact, it was the most laps led for a JR Motorsports car in nearly three years.

But the win wasn’t meant to be. A late caution set the field up for overtime, which eventually ended under caution, giving the win to Larson as they passed the backstretch line side-by-side. Despite taking home $100,000, it wasn’t a happy day for Allgaier.

Now, returning to RIR with no additional wins in the meantime, will he redeem himself?

Short track racing has favored the likes of Allgaier, who has brought similar heat to Iowa Speedway and Bristol this season. At Iowa, he led more than 100 laps in the July event, and at Bristol finished top five last month.

And after suffering a rotten run of races, finishing 20th or worse in five of seven races mid-summer, he has turned the corner heading to the fall playoffs, with two top fives and three top 10s in the last five races.

With expectations turning Little Gator into a favorite come Friday night, the one misnomer is Kyle Busch, who didn’t race at the track in April and will go for a sixth XFINITY win in just 10 starts this season. Perhaps he is the only one between Allgaier and Victory Lane.

Kevin Harvick will join Kurt Busch and Dale Earnhardt Jr. as those who joined the 600 Club in 2017.

Saturday at Richmond will mark the 2014 Cup champion’s 600th start in the series. And in a career that has included 36 wins and 21 poles, he also has 300 top 10s, remarkably splitting his career down the middle.

At such a late point in his career, the Californian doesn’t seem to be floundering much in his fourth year with Stewart-Haas Racing, scoring one win and eight top fives toward a current standing of fourth in points earned. And his Richmond numbers aren’t that bad either. In 33 starts, Harvick has led 1,061 laps and has 21 top 10s. Additionally, he has tallied three wins (2006, ’11 and ’13) and has three consecutive fifth-place finishes entering Saturday.

More importantly, Harvick, SHR and Ford could use a win. Toyota struggled to start the year but has hit high power with six of the last eight race wins. Ford, meanwhile, hasn’t won since Ricky Stenhouse Jr. at Daytona International Speedway in July, and Harvick’s Sonoma Raceway win the week earlier is still the last win for SHR this season.

With plenty to race for Saturday night, a win in his 600th start would be well-timed at Richmond.