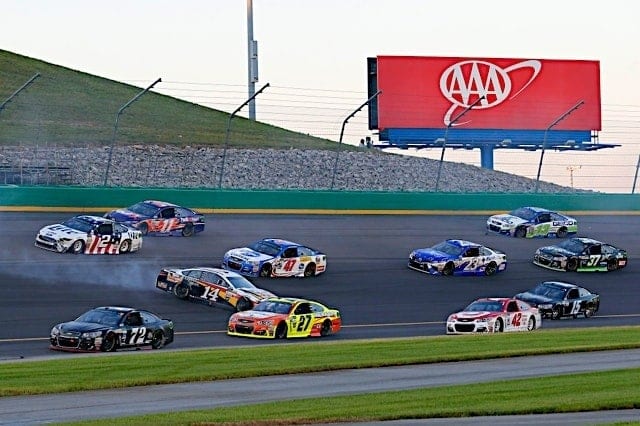 Crash your car, start at the rear.

Starting in 2018, teams will be forced to start at the rear of the field if they opt to roll out a backup car at any point throughout the race weekend, NASCAR announced in a release Thursday, Sept. 7.

Previously, teams could start wherever they qualified even if they crashed their primary car in a practice session after qualifying. With the advent of this new rule, that will not occur anymore.

A handful of engine regulations were also announced on Thursday, including an announcement stipulating that for 13 races during the year (teams can choose any of the 36 races), teams must use an engine that was already used in a previous race weekend and had not been updated or refurbished in any way, with seals placed on each engine so that they cannot be tampered with.

Additionally, if a team uses a backup car at the track, that car cannot already have an engine installed, a rule that was already in place at select tracks.

The full 2018 NASCAR rule book has not yet been revealed but is expected in October.

2- The cup cars, even if the team has 20 of them, are not the big money ticket that is killing the little guy’s chances to cut in to the Cup level….it’s the personnel. No team needs 450 or more employees. I hate to say it, but maybe NASCAR needs to quit trying to make the cars cheaper and put some sort of salary cap on team employees.

My humble opinion, of course.

1 – Is any investment in motorsport amortized? As the credo goes: want to make a small fortune in motorsports? …start with a large one! Nothing in these two updates obsoletes any parts or assemblies.
2 – I agree 100%. Mom & Pop orgs can NOT compete against these 4 car corporate juggernauts with inexhaustible budgets. But then again, that is by Nascar’s design, so I think it unlikely they will implement anything meaningful with regard to “caps”.

– The engine constraint rules seem pretty ridiculous. I supposed it could be worse, like 65 position grid spot penalties, lmao! Enforcement should be like herding cats… next to impossible, with plenty of wiggle room for selective enforcement payola. 13 doubles, variable or not, is the better part of the season, so why not just dictate which events require doubles & singles? So with this, grenade-ing engine will be common-place in the proceeding seasons. I’m willing to wait & see, but from the onset, I don’t think it will be useful fiscally, & it will hurt the quality of their “staged” exhibitions.
– The back-up car rules are a major no brainer. Why would it be any other way? …but to promote the corporate juggernaut teams & disadvantage the little guys. To bad it only covers P3, & is not applicable to P1, P2 or Q. So, it’s only about a quarter as useful as it should / could / would be. It should cover ALL sessions at any given venue weekend, but…. I’LL ALLOW IT as is! :D

Appear as if we are finally seeing a serious effort at cost containment by the teams. Evidently someone has realized that the only way to do it is to penalize unlimited spending. The engine limit is far from draconian, other series have used it successfully, nor is the effort to discourage the free use of backup cars.
Neither of these moves should effect the product that fans see on the track. And is really long overdue. Now if they will just start DQ’ing illegal cars.