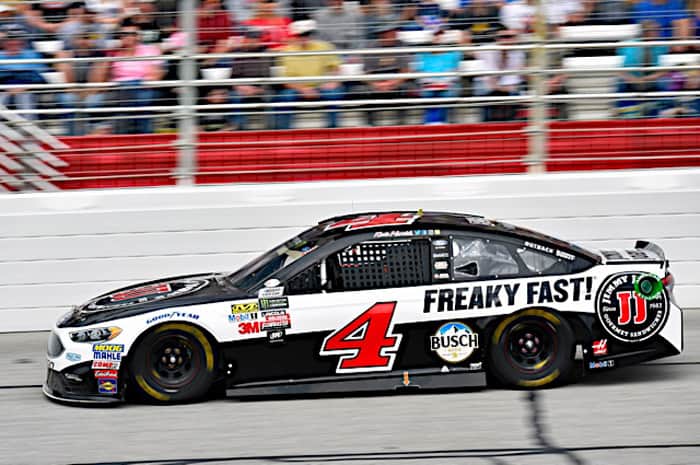 DraftKings’ daily fantasy NASCAR heads to Richmond Raceway this weekend for the Federated Auto Parts 400. The green flag on the sport’s regular season finale flies Saturday night at 7:30 p.m. ET on NBCSN. For most drivers on the playoff bubble, this race serves as the last hope for any chance at racing for the championship.

Cars hit the track on Friday at 10 a.m. for first practice and again at noon ET for final practice. Drivers battle for the Coors Light Pole Award at 5:45 p.m.

This week’s fantasy forecast is brought to you by DraftKings, the No. 1 platform for Daily Fantasy Sports. You can jump in on all of the daily fantasy NASCAR action at Richmond this weekend by signing up at this link for a free entry into one of this weekend’s contests. All you have to do is make a $5 deposit to get started!

Busch had a quiet second-place finish last weekend at Darlington. He was running third with three laps to go when leader Martin Truex Jr. blew a tire, misfortune which allowed Busch to make the pass. With his playoff position sealed up, Busch has nothing to worry about going into Richmond, one of his best tracks.

That makes him a daily fantasy NASCAR favorite for a strong, commanding performance Saturday night. Busch has the best average finish among all active drivers through his 24 starts (7.3). He also has the most wins (four) and the most top-five finishes (15) while leading over 1,000 laps total at Richmond. He is the first dominator candidate of the weekend.

Harvick led 22 laps from the pole last weekend at Darlington. He led up until the first caution of the race, and then his pit crew had a slow stop. From that point on, it seemed like the No. 4 car never recaptured its early magic. Harvick would reach the front once more, but was not able to compete with the top cars over the long race and finished ninth.

However, this regular season finale offers redemption. Harvick has three straight fifth-place finishes at Richmond and there is no correlation to starting position as he has started from the pole, 19th, and sixth over those races.

Bottom line, despite some disappointments Harvick is in playoff form heading into the last regular season race. He is another solid dominator pick if he starts on the front row, but will find his way up front regardless.

NASCAR has deemed Hamlin’s Southern 500 win last weekend encumbered following a failed post-race inspection. As a result, Hamlin will be without crew chief Mike Wheeler for the next two races. Hamlin was docked 25 championship points and lost the five playoff points earned from his win.

Nevertheless, Hamlin is outstanding at Richmond, his home track. He has three career victories, most recently this race last season. In that one, he led 189 laps from the pole and put himself in position to have a solid ten-race playoff.

Expect that to happen again. Back in April, Hamlin finished third and led 59 laps. He will be looking to secure his third straight Richmond podium finish and his fourth straight top 10.

Logano has run terribly since having his win taken away following the first Richmond race this season. The No. 22 team has lacked speed while dealing with multiple different part failures. That slump has left this Team Penske driver on the outside looking in on the playoffs, putting him in a must-win situation this weekend.

Luckily, Logano is headed back to the track where he last saw success. Sliced Bread has seven straight top-10 finishes here, including two wins and is averaging a fifth-place result over that span, 7.5 positions better than his average over 25 career starts.

Expect Logano to put it all on the line this weekend. He has huge boom potential.

RUTHERFORD: 5 Drivers Most Likely To Win Their Way Into Cup Playoffs

Bowyer is the second most notable driver who needs a win to make it into the playoffs. He sits 11th in points but, due to the amount of different winners this season, remains outside the bubble. Bowyer retired after only 18 laps last weekend with engine issues, putting him in a win-or-bust position.

It’s possible he can still have a breakthrough performance which will help your daily fantasy NASCAR roster. Bowyer ranks seventh in average finish at Richmond among active drivers with more than five starts. He finished 15th in the first race this season while, prior to 2016, he had three straight top-10 results. The Stewart-Haas Racing Fords have been fast as of late so expect an extra effort to get its third driver into the playoffs.

Last week at Darlington marked Busch’s second straight top-five result as well as his fourth straight top-11 finish. The team has turned things around since its midseason struggles, making Busch hot at the perfect time.

Busch is another multi-time Richmond winner, cashing in as recently as the spring race in 2015. In that event, he started third and led 291 laps. Overall, he has seven top-10 finishes in the last nine Richmond races. Add in the current momentum at the No. 41 team and there is no reason to expect anything different this weekend.

Richmond: One start, one 12th-place finish

The small sample size for rookie Suarez should not be a concern for daily fantasy NASCAR players. Similar to last season’s XFINITY Series title campaign, he has gotten stronger as the season goes on. Although Suarez did crash last weekend, he has five top-15 finishes overall in the past seven races.

The front-runner for Rookie of the Year honors is just beyond reach of the points bubble, needing a win to make it into the playoffs. While that is not out of the question, the odds are against him. Still, Suarez has a solid chance for a top-10 result.

The salary makers at DraftKings have overlooked Newman once again this week. He is priced alongside drivers that have nowhere near the track record he does at Richmond. Listed at the same price back in April, Newman finished a strong seventh. He started 12th and led 25 laps in that race.

What that means is Newman will yet again be a steal this weekend. He is fifth in career average finish here, above the aforementioned and more expensive Logano, Bowyer, and Kurt Busch. 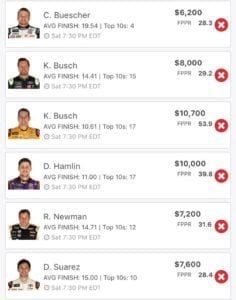