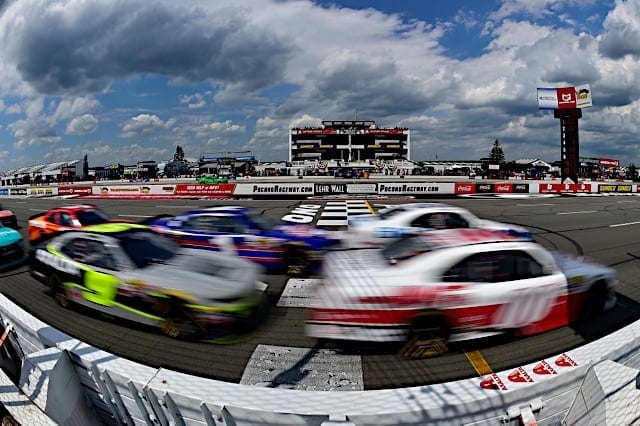 Subway announced last weekend it’s dropping its backing of Joe Gibbs Racing and Daniel Suarez after Suarez did a television segment holding a box of Dunkin’ Donuts doughnuts.  Does the negative attention the company’s gotten outweigh the reasoning behind the change?

Michael Massie: Subway’s deal was with Carl Edwards, but it would have been labeled as racist had it left as soon as the team signed a Mexico-born driver. Instead, Subway waited for something to happen to justify leaving. When NBC tricked Daniel Suarez into participating in a giant advertisement for Dunkin’ Donuts instead of getting donuts from a local shop close to the racetrack, Subway jumped on the opportunity. Subway is too massive of an entity for the negative publicity to affect its business. We Americans don’t know how to boycott fast food.

Matt McLaughlin:  It seems like Subway was looking for a way out and found this flimsy excuse. It’s like saying that because a driver did burnouts and doughnuts after a race, he promoted a competitor’s breakfast alternative. Oh well, perhaps Subway will use the money it saves to lower its outrageous prices and cut down on the inevitable long wait when you choose to patronize its filthy stores. I am surprised Dunkin’ Donuts doesn’t sponsor the F1 Force India team, though.

Amy Henderson: I agree that Subway was likely looking for a way out, and I’ll admit my first thought was that it was for less-than-PC reasons.  I do understand its position, to a point, on the conflict.  Dunkin’ Donuts does sell a competing product, breakfast sandwiches (Dunkin’s are actually good, but that’s another story). You do have to wonder, though, if the PR hit Subway has taken has been worth it.  Long term, it won’t hurt, but it’s getting absolutely roasted for it right now. Subway could have simply said it was moving on from NASCAR at the end of the season and nobody would have thought twice about it.

Bryan Gable: I don’t buy the Dunkin’ Donuts pre-race segment excuse.  Subway was probably looking for a way out of the sport.  Suarez being on TV with doughnuts when his sponsor sells sandwiches is a really lame attempt to justify the company’s severed ties with JGR, so I do not fault the fans for throwing the decision back in Subway’s face (or at least its Twitter account.)  Given that Subway could have stuck around for one more race and exited quietly, leaving Suarez now seems like a poor decision.

As summer draws to a close, racing enters championship mode.  Which series has the most compelling championship battle in 2017?

McLaughlin: Is “compelling” French for “artificial and contrived?” If not, none of the above.

Henderson: I can’t believe someone would even mention NASCAR in this.  While NASCAR’s setting up the playoffs, which may or may not mean they even get a truly deserving champion, the guys over in IndyCar are waging a great battle with no points resets.  They’re heading into their season finale with a whole three points between the top two and a couple others still in mathematical contention.  It’s going to be a hell of a battle if Josef Newgarden and Scott Dixon are both contenders in the race.  NASCAR can’t hold a candle to it, and neither can NHRA

Gable: The MENCS championship will come down to either Martin Truex Jr., Kyle Larson or Kyle Busch.  Christopher Bell looks like the favorite in the Camping World Truck Series.  Therefore, I will go with the XFINITY Series because the title hopefuls are not so clear cut in that division.  It will also be interesting to see which series regulars can step up their game and win in the playoffs.

Massie: The Cup Series will have the best battle because there are roughly 10 drivers who could potentially win. In the other two series, there are only three or four. The addition of the playoffs to those series definitely make those championship battles worth watching though. Otherwise, Elliott Sadler would already be hoisting his first XFINITY Series trophy.

This week’s race at Richmond Raceway is the last chance for any Cup driver to score a last-minute win to make the playoffs.  Does anyone have enough positive momentum on their side to make it happen?

Gable: Erik Jones has tons of momentum right now, but that doesn’t mean that he’s going to win.  Remember that Jones crashed a few laps into the race at Richmond earlier this year, so he still does not really have experience running a Cup race at the three-quarter-mile track.  Even with a fast car, these races are difficult to win, and asking a rookie like Jones to win his first race with so much on the line is a really tall order.  The 16 drivers who are currently in the playoff field will all still be there after Saturday night’s race.

Massie: Jones has the most momentum with three straight top fives. You can’t count out Joey Logano, though. He is, after all, the most recent Richmond winner.

McLaughlin:  There’s what, about 24 truly competitive teams in Cup racing these days?  If a driver and team haven’t managed to reach the top 16 cutoff point after 25 races, they don’t deserve to be in the title hunt.

Henderson: The only driver with enough Toyota—er, momentum—is Jones, and asking a rookie to go out and win under that much pressure is a huge order.  Logano is racing to not lose at this point, and that never works out. Dale Earnhardt Jr. would be a great story, but he can’t find his butt with both hands and a flashlight this year. Jones is the best choice, but it’s more likely the winner will come from the pool of drivers who already have a trophy this season.

In Sunday’s CWTS race, Austin Cindric took the win after wrecking leader Kaz Grala.  Did Cindric cross a line with the move, or is it no different than Jeremy Clements’ XFINITY win at Road America the week before?

Henderson: It absolutely crossed a line. Austin Cindric didn’t even make an attempt to pass Kaz Grala cleanly; he just drove up behind him and dumped him as soon as he was close enough.  He had a faster truck and enough racetrack to race for it and chose the easy (and cheap) way out. Jeremy Clements tried to pass for the lead and couldn’t hang onto this car.  That was a racing deal.  Dumping a guy when you have a faster truck with zero attempt to make a clean pass?  That’s just dirty. A bump-and-run is exciting because it uses contact but doesn’t wreck anyone. That’s what fans want when they talk about hard racing, not cheap shots.

Massie: Dale Earnhardt and Darrell Waltrip did much worse to win races. Waltrip spun two guys to win once at Martinsville Speedway. People always say they want the racing to be like it was when those guys drove but turn around and label Cindric as a dirty driver. Cindric did what he had to do to win a race. In this format, winning is everything. If you aren’t doing everything you can do to win as a driver, then you are letting your team and sponsors down. Do what your job is, worry about other people’s hurt feelings later.

McLaughlin: This is stock car (er, truck) racing, not lawn croquet. You’ll note the commercials promoting the sport don’t use highlight reels of surgically clean passes or a driver graciously conceding the lead after realizing the other driver has a faster car. Then again, about the nicest thing I can say about most of this season’s racing is that at least it wasn’t soccer.

Gable: Totally different situations.  Clements made a move to pass Matt Tifft, lost control and spun both cars out.  It was an error on Clements’ part, but it was not intentional.  What Cindric did was clearly not an accident.  Running into the back of a competitor and spinning him out is not racing.  Competition in motorsports is about skill behind the wheel.  It takes skill to move someone out of the way without dumping them in order to complete a pass.  The bump-and-run is great fun in stock car racing when executed properly, but there is no skill or respect involved in a dump-and-run.  Cindric’s move was dirty and unprofessional.  It was not OK when Earnhardt did it, and it’s not OK now.

Does not mean a thing, all for nothing..until a few well time cautions for hot dog wrappers, a dive down from a competitor in the CHASE/PLAYOFFS whatever, alters the phony ‘ONE RACE CHAMPIONSHIP” and NASCAR/BRIAN gets his orders followed!!!!!!!!!!!!!!!! IMO! Why is this so hard to see? This BS of a faux merit based “PLAYOFF” is crap, and haven’t anybody watching and have learned from years of this? Starting with the stupid “CHASE”. Good flucking grief!

The F1 battle will probably come down to the last race and it won’t be a one-race crap shoot for four drivers.

Remember the year that Felipe Massa had the championship won until the last corner in Brazil.
Nascar would die for that and it wasn’t manufactured.

NASCAR championships are jokes now because they are contrived to be close but the end result is a crapshoot where teams that shouldn’t even be in the conversation have a shot. They may be entertaining but the aren’t compelling unless you can look past the fact that they have been “fixed” to be compelling, which may be fine for scripted programming but not a sporting event.

Just for fun why doesn’t somebody mention that it was Suarez and JGR that violated the sponsorship agreement with Subway, not the other way around. An agreement where the company was paying them, not the other way around, a major amount of money per race. All they had to do was use their heads for just a little longer. Notice you haven’t heard anything from JGR or their attorneys and that tells you who screwed up.
We don’t excuse nascar when they do dumb stuff, the teams should receive the same.

I agree, it is interesting that SUBWAY is being made out to be the bad guy. Funny times we live in, too many folks are snowflakes it seems and don’t want to take ownership for the error of there ways. Too many people want to pu the garbage on someone else, because “they don’t like the rules”. Sick times we live in.

This Suarez thing is peanuts in PR fallout compared to the whole Jared ordeal for Subway and they survived that.