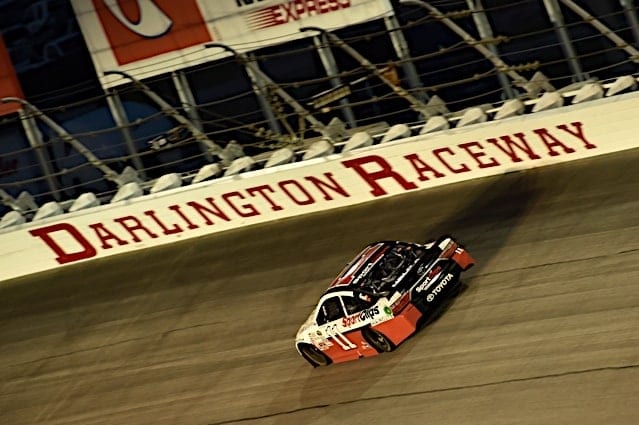 Welcome back to another edition Happiness Is, complete with fresh Happy.  Or something.  I’m not sure that the elves in the kitchen can always be trusted to deliver the freshest and bestest of happiness but they try.  But after this past weekend, it shouldn’t be too difficult.

Much gets made of the TV viewership numbers, and rightly so as so many determinations are made surrounding the sport, from inside business negotiations to outside perception.  With that being noted there should also be a gentle reminder in place.

Both Fox and NBC have been putting races on their sports networks in an effort to build those networks into bigger players in the sports world.  Live sports remains as one of the last vital assets in the TV marketplace (and is also the reason that online streaming is so vehemently dealt with).  Hence, placing NASCAR races, even a ‘crown jewel’ on FS1 or NBCSN is a strategic move by the networks.  NASCAR is at the mercy of having sold the rights to these networks.

The networks are playing a long game.  A 1.7 rating for Darlington may be disappointing but network honchos may see it as a good mark for where the race was shown.  The flipside is that they believe it will encourage more people to sign up for said network.

It’s a move that could certainly backfire and fan attitudes to having the races on these networks has proven to be negative.  But it’s not going to change.  The value of the races is a strategic building block for moving forward and becoming more important within the sports world.  It would not be a surprise to see almost all the races moved to FS1 or NBCSN in the near future.

Happiness Is… Darlington.  Darlington Raceway sits out in the middle of seemingly nowhere.  It isn’t really in a small town, and a major city is a good deal away.  It may be close to I-95 and I-20, but that’s about all.  It’s a throwback in a sense that it throws back to a lot of other tracks sort of like it (cough cough, Rockingham) that have been taken off the schedule and left for development or desolation.

The governing organization has toyed with Darlington since the mid aughts, taking a race away and bouncing the one it had left all over the schedule.  And yet it persists.  It serves as a beacon, one that collides against ever-changing forces to announce that yes, it’s still there and yes, it still matters.

So kudos to everyone who turned out this past weekend to remind us that the track is still relevant.  While one may debate the merits of the throwback weekend or whether or not the racing was any good, the race at Darlington has become something of an event, rustic and down-home.  Such a showing is great news.

After so many stories extolling how attendance has faltered at so many tracks, to see the stands, capacity 58,000, rather full demonstrates that the race, and sport, still matters to some people.  Sure, filling Darlington is much easier than a track like Michigan, but the truth is that Michigan overbuilt through fits of extreme optimism.  Darlington represents the porridge that Dorothy likes, just right.  Seems like a wonderful thing.

Happiness Is… Fans.  Daniel Suarez is a rookie Cup driver, with an XFINITY championship, trying to navigate the super scrutinous other-world of the premier series.  It’s a difficult alternate universe, complete with its own laws and politics and just like the regular world, contains problematic aspects.  Suarez discovered the complex realities of the Cup Series this past week when his sandwich shop sponsor that used to have a someone who trafficked in child pornography as its sponsor dropped its support of his race team.

Sure, he had only one race left with the company that swept aside of its former frontman, but Suarez did little in the way that should be considered egregious.  Oh, wait, he passed out Dunkin’ Donuts.  The shame.  The horror.  The evil ways of the world. What was Suarez thinking?  Or something.

What happened with Suarez is that he got caught in between trying to do good for NASCAR and apparently going against his sponsor’s wishes.  Doing a goofy piece with Rutledge Wood for NBC to help market the sport is not exactly the worst of offenses, even if, after all, that person is working with Wood.  (Har.)  But Dunkin’ and the sandwich shop are rivals, in the sense that they both sell food, so he committed one of the biggest sins someone in his position can – mess with capitalistic priorities.

Many fans in NASCAR have turned Suarez’s firing into a bit of a backlash – with many on social media commenting that they will be going to the sub shop rival Jimmy John’s or will make sure they patronize Dunkin’.  This type of fan response is what makes NASCAR its own world.  People can infight as much as they want, but when a greater force messes with things they often come together.

Brand loyalty and NASCAR fans has been studied for over a decade with many articles, both journalistic and academic, recognizing that NASCAR fans exhibit the strongest brand loyalty of any sport.  Will a NASCAR-fan boycott of the sandwich shop mean much?  Maybe not, because some fans may not care, because no one’s going to picket the stores, because the outrage is minuscule – but the reaction is a reminder that toying with loyalties in the sport brings more severe consequences than elsewhere.

Happiness Is… Road Courses.  While Cup and XFINITY were doddering around an egg-shaped oval somewhere in South Carolina, the Truck, IndyCar and Formula 1 drivers had their way on road courses.  For F1, such an idea is nothing new – considering it’s their only idea.  For IndyCar, the race at Watkins Glen brought difficult conditions that has created a seriously tight race for the championship with one race remaining.  When points leader Josef Newgarden lost it coming out of the pits and bounced into the wall on pit out and then got speared from behind, his overall lead got shunted.  Who could imagine such a thing?

Then there was the Truck event in Canada, at a track that seems to encourage drama as few can.  Austin Cindric’s backbumper beatdown on Kaz Grala, earned Cindric the win and put him in the playoffs.  Grala’s relaxed reaction surely hides a frustration and sense that retaliation will be forthcoming.

Are these comments meant to intone that road courses should be the norm?  Nope.  But there should certainly be a few more.

well you may consider the TV numbers to be irrelevant because NBC & Fox are trying to “build their brand” and that may be true. However the ONLY time I ever watch NBCSN or FS1 or FS2 is if there is a race on. Therefore I am probably not contributing much to their building and if my cable provider ever decides to take those channels out of my channel guide or decides to charge me more $ to have them, I will drop them like a hot potato simply because their value to me is not worth extra $.

I’m guessing I am not the only one. It would also be really great if NBC could figure out how to actually broadcast a race worth watching & include the intervals so that the fan at home can actually follow the race w/o having to use alternate methods to find out if the driver they are following but the broadcast is not covering is actually making progress in the race.

Simple things that used to be done and did indeed make race fans happy, but are no longer done.

it was nice to see lots of people in the stands at Darlington -that is a reason for the speedway to be happy.