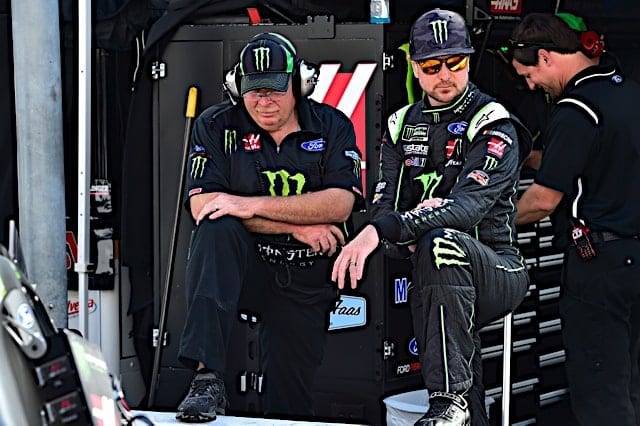 The No. 41 team had another strong run on Sunday to come home third at Darlington Raceway. The team is running strong over the last few races, just in time to make a run at a title. Strategy calls by crew chief Tony Gibson put the team in position to win in last week’s Southern 500 but the caution they hoped for never came. Gibson will be making more strategy calls this week in the final race before the playoffs.

In this week’s Tech Talk, Gibson looks at multiple racing grooves with the multizone tire at Richmond. He also explains that the track is completely different from every other one that is raced in Cup and provides its own unique set of challenges. He especially focuses on brakes thanks to the new rules package and the high speeds that we will see at Richmond on Saturday night. He also works in a tire draggin’ shout out.

Mike Neff – You managed to screw around in Darlington and finished in third behind a driver who had an encumbered win. How did you feel like your night played out?

Tony Gibson – We did, we had a strong car all night. We had a really solid weekend. The Monster car was fast when we unloaded off of the truck. Things were looking pretty good. We made some long runs and our car was decent on the speed charts on 25 lap runs. We just kind of tinkered with it to make it a little better long run car, we knew we had short run speed. We were just trying to work on long run speed and we made it a little bit better. The race just kind of came to us. When the race track went into the night and it rubbered up a little bit our car just got a little bit better. We ended up racing up front and led some laps.

We had a shot at the win I thought. We kind of pitted between the big pack of cars and the No. 11 and No. 18. We were on the same plan as the 11 and the 18 and I figured if I pitted with those guys I’d be racing them. So we pitted six or so laps before they did, trying to get on fresh tires and get a big enough lead on them so that a caution would come out before they caught us. If that happened we’d come out of the pits first or second and have a shot at the win. The caution never fell and those two got around us. We had a solid night and I’m really proud of the whole everybody. We’ve had a really good month here with the No. 41 and we’re just trying to build on it heading into the playoffs.

Gibson – Well long run speed is about making the car as compliant as you can. A lot of it is air pressure and shock adjustments. The car makes short run speed if you put it into qualifying setup, but you can’t be in qualifying trim for the whole race. However, you can take some of that and apply it to your car for the race and get yourself some long run speed without hurting your short run speed very bad.

A place like Darlington, the tires wear off so fast that you really need to be good from lap 25 to lap 60 because you know most people are going to pit around there. If it goes green they’ll pit around lap 50. So that is what we worked on. Where were we around lap 25, lap 30. How was our car? We made four 25 lap runs in practice and we found some long run speed that did not hurt our short run speed so we held onto that for the race and it worked out pretty good.

Neff – We’re headed to Richmond for one more race before the playoffs. Your team is on a good upswing in the momentum department. How are you feeling about your car for Richmond? Do you feel like you can put a second win in the books?

Gibson – Yeah, I think it is a really good car. Kurt has a good record here. He’s won here a couple of times. It has always been a good track for me and my group. We won here with Kurt in 2015. I feel like, if things stack up just right, and if we can have another strong weekend just like Martinsville off of truck, we’ll have a shot to win it.

Neff – Richmond had a second groove for years where you could get next to someone but you had to work really hard to complete the pass. It seemed like you could run that way forever. They switched to the multizone tire and that may have hurt or may have helped Richmond. Do we have the multizone tire this weekend and do you feel like your car is capable of making two grooves work again?

Gibson – I think the track has worked on running the Tire Draggin’ for several days to try and get the high groove to come in. It came in pretty good during the last race here. Some guys were pretty fast up there. There is definitely a bottom lane and a top lane and NASCAR has worked with the track to try and get that top lane to rubber up and come in a little quicker for Friday’s race and definitely Saturday’s race. It will definitely be a two lane track with two different places to run. I think it will make for a great race, especially that top lane coming in during a night race. Guys seem to get loose in and you can run the top groove better if you’re loose. As for the tire, they haven’t changed anything on the tire. It is the same multizone tire. That is a good thing. Coming into this race it is good to know they haven’t changed anything and you can use your notes from the previous race.

Neff – We often hear that Richmond is a short track that thinks it is an Intermediate. What can you take from tracks like Chicago and Kansas, with a little flatter turns, and apply at Richmond?

Gibson – None of that stuff will really relate. This place is a heavy braking race track. The corners are different. The way you get into one and through one is tough because it is so tight off of turn two. It is kind of a breed of its own. It is a different race track that is probably most similar to Phoenix than anything. However, we use way more brake here than we do at Phoenix because we run faster here. Entry speed is up pretty high. It is a different breed. I’d say the notes from Phoenix are the only ones that can relate anything.

Neff – Brakes have been an issue most of the season thanks to the new, low downforce package. Seeing as Richmond is such a high braking track, do you have to pay extra special attention to your brakes even more this weekend because of the low downforce aero package?

Gibson – Yeah, we have used more brakes all year long at just about every track thanks to the low downforce. You don’t have the spoiler to help slow you down when you decelerate. You don’t have the air on the spoiler dragging the car and you don’t have as much drag in the car. Something has to stop it. Unfortunately you have to use more brakes which can cause issues and it can build air pressure pretty quick. It is another element that this downforce package brought in this season that we have to pay attention to.

Neff – Talking about accelerating and decelerating, with the gears you run in the cars this weekend, are you able to rely on the engine to help slow you down? When you lift does the transmission and the rear end help knock off RPMs?

Gibson – They keep taking gear away. The gears don’t stop it as well either. We really can’t rely on the gearing anymore to help slow it down. It is all the brakes. If we had more gear it would definitely slow it down on deceleration. As this package was introduced they took gear away so we have a lot taller gear so when you let off of the gas it doesn’t slow it down like it used to. We don’t have that working for us either.

Neff – Stage racing has been the topic all season. It is your last chance before the playoffs to get a couple more playoff points. Is the tire degradation going to be enough at this race where short pitting could benefit a stage strategy?

Gibson – It could happen here because of the tires. There is a lot of fall-off here at Richmond the last couple of years. Tires will mean a lot and strategy will be a factor for sure. I feel like, if you stop too early and try and split the segment you could end up getting yourself in trouble. You could end up getting caught by a caution and go a lap down or have yourself stuck having to stay out to the end of the segment and finding yourself on old tires while everyone else is on new tires. The segment racing has definitely changed our thought process. Then you come to a place like here and Darlington where tires are so huge, it is just a whole other element that you have to pay attention to because, if you don’t, it could bite you in the butt. You can short pit, get caught by a caution and then you are kind of screwed.

Neff – Making pit calls is why they pay you the big money. It is exceptionally hard at Bristol and Martinsville because they are half mile tracks. It is about as hard at Richmond because the commitment ‘cone’ is so close to where they pick up the field under caution?

Gibson – That is a pretty big deal. Strategy is huge and you get to that line so quick that it will certainly come into play, it always does at this place.