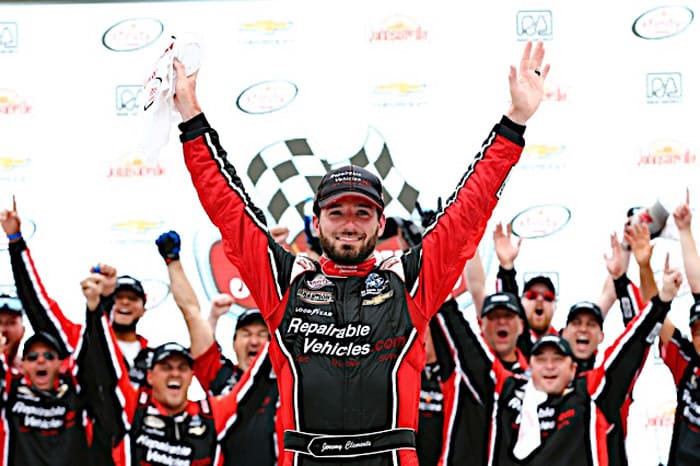 Two weeks ago at Road America, Jeremy Clements did the near impossible — bringing his family-owned XFINITY Series operation to Victory Lane for the first time in 256 races.

The Spartanburg, S.C. native has dedicated his life to racing, particularly NASCAR. Going full-time in 2011, Clements never saw the success that he desired, being severely underfunded. Instead of setting up cars weeks in advance, they are more of a week-to-week organization, though having no intentions of missing a race.

Road America was no different. The No. 51 team showed up to the racetrack with an eight-year-old chassis. In present-day NASCAR, that’s unheard of. It’s the same chassis Clements crashed two weeks prior at Mid-Ohio Sports Car Course en route to a 37th-place finish. The week prior, he finished 35th at Watkins Glen International. The team had no momentum, but that can change with a flip of the switch, and it did.

Clements, 32, played his strategy right at Road America, having the freshest tires at the end of the race. He drove through Matt Tifft coming to the white flag, but all is fair and love is war. You do what you have to do to make the playoffs.

“That was an amazing day, for sure,” Clements told Frontstretch at Richmond Raceway. “It took a few days [to sink in]. I couldn’t believe it. I sit there and look at little videos of what happened—I haven’t been able to watch the full race yet, but it was like it was meant to be. I’m so blessed to get that win and put that in my memory knowing we can do it. It’s something that I’ll never forget. It’s probably the greatest day of my life.”

Yes, Clements admitted that the victory was more special than getting married, which happened earlier this year when he married long-time girlfriend Courtney Dryden. But a win will always mean more when it’s met with years of struggle.

“I’ve raced for so long and it’s been such a battle in racing for a small, family team with hardly any money,” he said. “To be able to finally break through is what is amazing. To beat all the big teams that we raced that day at a road course is just so cool. I’m still excited about it.”

Cool, indeed, as many of his fellow competitors gave him a shoutout on Twitter, or personally approached him in Victory Lane. Justin Allgaier, Elliott Sadler, even Tifft — the list goes on.

Establishing your name in NASCAR is hard to do with a smaller team. But Clements, who is coming off arguably his best season with three top-10 finishes last year, has done just that and earned the respect from the elites.

“It gave me chills after the race when guys were coming up to me, congratulating me, high-fiving and saying how much it meant to them for me to win,” Clements said of the support. “I couldn’t ask for more. Mr. Hendrick sent me a gift basket and I’ve never even met Rick Hendrick. I got one on Tuesday and that’s why it was so cool. He didn’t have to do that, but he took his time to send us one and acknowledge we won.

“I think we were respected anyways [in the past]. I don’t know if that changed at all, but I feel like guys knew ‘Oh, he’s a pretty good driver, his equipment is just not that good.’ That’s what I’ve felt in the past, and unfortunately you’re labeled by your equipment. I think guys think ‘He doesn’t drive crazy. He gives respect and some days he’s fast, some days he’s not.’ I think we were respected before, but it definitely helps.”

Statistically, 2017 has been a rough year for Clements outside of his victory. The No. 51 placed seventh at Iowa Speedway in June, but has just two other top-15 finishes through 24 races. Whether it’s been the new downforce rules that NASCAR implemented at the beginning of the season (getting rid of it all), or having upward of 20 full-time teams that are either run by Monster Energy NASCAR Cup Series teams or affiliates, the family team has had to overcome a lot.

“The win has definitely made it a lot better,” he said. “As of right now, it’s been a frustrating year, but we got a freaking win, so it makes it all worth it. Even before Road America, we finished 18th at Bristol and didn’t run well at all. I think five races before that, we had problems in every race; wreck, blown tire, hit the wall, different things happened. We had so much bad luck in a row and it was really disheartening.”

Quite simply, Clements falls under the category of needing more funding. The organization has eight chassis, the newest running this weekend at Richmond, which was built in 2015 by Richard Childress Racing. Besides this racecar, the newest car the team has made its debut in 2013.

Two races remain before the playoffs begin at Kentucky Speedway, a track that Clements has a pair of 12th-place efforts at. Throughout the playoffs, it’s all about avoiding mistakes and letting the competition get the themselves in trouble.

“We know we want to run good and we’re just going to run our butts off to make it to the next round,” he said. “Everybody knows that. We don’t even need to sit down and talk about that. It’s obvious. We have to be ready and give it everything we’ve got. We’re going to try and bring our best foot going forward to each race. Because like I said, some guys are going to have problems and we’re going to try not to.”

But despite how the remainder of 2017 plays out, Clements considers it a successful season.

“That victory makes up everything,” Clements elaborates. “Now that we are in the playoffs, we want to make sure that we’re not just in them. We want to make a splash. I would love to go to Homestead and just have a shot. That would be so cool, and you never know. We could do it. We’re going to give her hell trying.”