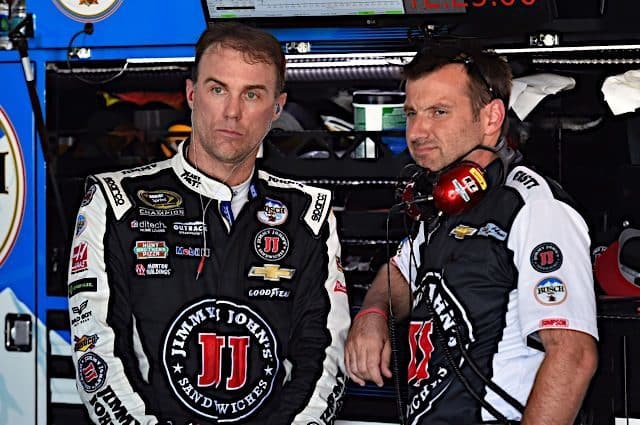 Rodney Childers: From Behind the Wheel to Atop the Pit Box

No matter the work you do on raceday – mechanic, spotter, tire changer – the most important job is that of the driver. They’re the one responsible for actually wheeling the car to Victory Lane.

Most mechanics setting up these cars never got the chance to drive. But Rodney Childers, the championship head wrench for Kevin Harvick remembers just how close he came.

Starting from the young age of 12, the Mooresville, North Carolina, native made his way in racing through the cockpit before eyeing another path. Currently, the 41-year-old is enrolled as crew chief for Harvick and Stewart-Haas Racing in the Monster Energy NASCAR Cup Series, a fruitful partnership that includes the series title in 2014 and 13 wins in four years.

But it all didn’t seem to be heading that way growing up. Instead, Childers’ career targeted driving in his early years of watching stock cars.

“My family wasn’t into racing,” Childers tells Frontstretch. “But I had a lot of friends into it, one friend whose dad raced go-karts. I went with them a few times to the track, really enjoyed watching it and asked my parents for a racing go-kart.”

Childers’ parents were on the fence about the idea of their son getting into a race car.

“At first, they didn’t know what to think,” he says. “They couldn’t believe I wanted to do that. Ever since I was little, all I ever cared about was being outside, riding my bike. I don’t think they were surprised, but they didn’t know whether they wanted me to do it.”

Eventually, they caved and let their son start working up the ranks. From the start, Childers’ focus was on racing in the Cup Series as he advanced from go-karts, winning five championships on the national level, to late models in 1999.

“It felt like it was going fast,” he recalls. “It seemed like every year I was moving up to a different series. I loved it. It was a lot of passion and I enjoyed what I was doing. I felt like I was good at it.”

With success in the late model ranks, Childers partnered with Jay Robinson to make his then-Busch Series debut in 2000 at Myrtle Beach Speedway. And despite racing at his highest level yet, in hindsight, the start wasn’t a true showcase of his talent.

“It was an older car Jay had bought at an auction,” he says. “Looking back, I maybe shouldn’t have done that. It just wasn’t competitive at all. Probably made me look worse than what the experience was worth.”

Qualifying 33rd before crashing out to finish 43rd after only 69 laps, Childers was still appreciative of the opportunity to race among the sport’s best.

“Overall, it was exciting to be down there,” he says. “There was, I think, [47] cars there that weekend and we made the race. Unfortunately, we got in a wreck. But it was definitely a lot of good experiences.”

It’s the only race Childers ever ran in NASCAR’s top three series. And although 17 years have passed, there are a few drivers he competed with that day who went on to have long careers. Among them are Tim Fedewa, now the spotter on the No. 4 Cup team, and Harvick. Somehow, some way, these three ended up together more than a decade later.

“We talk about it every now and then,” Childers says of the coincidence. “I don’t think any of us knew each other very well back then. For all of us to work on the same team now and to have raced against each other that day was pretty incredible.”

But while Fedewa raced 333 times in XFINITY from 1992 to 2005 and Harvick’s successful career still spans to this day, June 17, 2000 stood as Childers’ only day as a national NASCAR driver. Why? Perhaps bad timing, he claims.

“That’s what I wanted to do; make it through the ranks as a driver in the Cup Series,” he says. “It just came to that time where there were too many drivers back then and not enough money to go around.

“I feel if times could’ve been different… if I could’ve been 10 years earlier or later, I probably would’ve gotten a shot. It’s hard to say. It all comes down to the right sponsor, right opportunity, right amount of money. It’s a tough sport. You have to have those pieces lined up. You see it these days that you have to have all of it to make someone run well.”

In 2003, Childers officially put the steering wheel in the closet to focus on the mechanical side of the sport. At first, he worked on the No. 77 Dodge at Penske-Jasper Racing before picking up his first crew chief position with Scott Riggs in 2005.

From there, he’s enjoyed over a decade of success on top of the pit box. But Childers said the decision to stop racing was “really tough.”

“It came down to… I was at the age where I had to be a real man and have a real job,” he says. “Overall, I tried to work hard at doing what I love. I felt like I was always good at working on the cars, that was my strong suit.”

Childers feels his experience behind the wheel, though distant, still benefits the Ford team to this day.

“Being on the pit box, watching Kevin’s roof camera from atop the car, I can tell a lot about what’s going on and what he’s going through,” he says. “I try to start thinking what’s better for him. Then, there’s some tracks we go to that I’ve actually raced at and I feel I have an understanding of what it takes to run well there. It helps a lot.”

(Below is a video capture of our conversation with Rodney Childers)

Growing up in Easton, Pa., Zach Catanzareti has grown his auto racing interest from fandom to professional. Joining Frontstretch in 2015, Zach enjoys nothing more than being at the track, having covered his first half-season of 18 races in the Monster Energy NASCAR Cup Series in 2017. With experience behind the wheel, behind the camera and in the media center, he thrives on being an all-around reporter.
Previous Tech Talk: Tony Gibson Talks Tires, Brakes & Strategies for Richmond
Next Blake Koch Fastest In Lone Richmond NASCAR XFINITY Series Practice