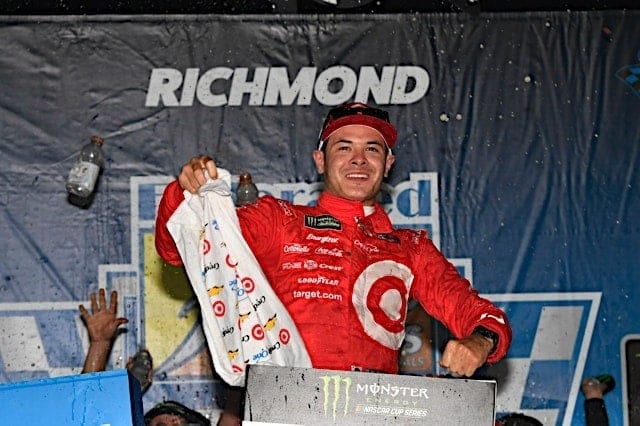 As the man in charge, Martin Truex Jr., pounded the Turn 1 wall on the last lap, it was a smooth sail to victory for Kyle Larson, who held off Joey Logano to score the victory in Saturday night’s Federated Auto Parts 400 at Richmond Raceway.

The win, his fourth of the 2017 Monster Energy NASCAR Cup Series season, leads the Chip Ganassi Racing driver into the playoffs with the best kind of momentum.

“I got the greatest team out here,” Larson said. “Definitely the best pit crew, that showed tonight. They we’re money all night long. This win is a huge congrats to them.”

Truex Jr. looked to be on his way to a fifth win this season until a caution with two laps to go set up NASCAR Overtime. If that wasn’t tough enough, Truex, who led 198 laps, lost the race off pit road to Larson and eventually crashed hard in Turn 1 on the last lap.

The regular season champion was upset with NASCAR’s call to throw the caution with two laps to go.

“A caution for a guy who should not have ever been out there is ridiculous,” Truex said of Derrike Cope, who hit the wall in Turn 3. “I know Denny didn’t do [last-lap crash] on purpose. I gave him room and he was hard on the brakes. It just sucks two weeks in a row to be leading and lose it.”

With a second-place result, Logano endured possibly his hardest runner-up finish to swallow, coming up one spot short of winning his way into the playoffs.

To Logano, not being in the playoffs changes the game for the remainder of the year.

“A successful season is winning a championship and that’s not going to happen this year,” he said. “Can we win a bunch more races and call it a success? Yeah, for the last 10 races and we’ll still celebrate victories. We came up one spot short to just being in it.”

One more driver who had much to be frustrated about was Matt Kenseth. The pole-winning driver led 89 laps on the night before being involved in a pileup of cars trying to avoid hitting an ambulance that was parked at the entry of pit road under caution. Despite making the playoffs, the quick car came home 38th.

Ryan Newman took advantage of he final restart to finish third while Kurt Busch and Denny Hamlin rounded out the top five.

The 404-lap race saw strategy take a part in who would spend time up front. Dale Earnhardt Jr. ran top 10 throughout the night and led the race for 13 laps under pit strategy. Unfortunately for the must-win driver, a needed caution did not fly, bringing the No. 88 back to finish 13th.

“We had to take a gamble on that last strategy,” Earnhardt said. “That cost us a handful of spots. Still a really good weekend for us.”

Another driver who missed the playoffs Saturday night was Erik Jones, who finished sixth after the chaotic final restart. Daniel Suarez got seventh with Jimmie Johnson, Kyle Busch and Chase Elliott rounding out the top 10.

After a big pit stop by the No. 42 guys, @KyleLarsonRacin scores his FOURTH win of the year! #TeamLarson #Federated400 pic.twitter.com/wzpC1Nk41G

That was why I kept commenting on Cope being in the event!

I believe Kenseth hit the back of Bowyer’s car.

And now the madness really starts. I can imagine the last race ending like that with Johnson winning number 8 like Brian wants. Any guesses who brings out the last caution in that event?

Sorry Don, but, this year, Johnson won’t be in the Final-4, it will be Truex, Kyle B., Kenseth, and Dennis-the menace, an all-Toyota final. THAT is Brian’s dream

Want to guess the first four drivers eliminated are Stenhouse, Blaney, Kurt Busch, and Brad Keselowski, with Harvick eliminated in round 2? That too is Brian’s dream!

Another race where Danica gets taken out on purpose. Can you imagine what a NASCAR race would be like if they used formula One rules of the road? Almost every car would be penalized during the race.