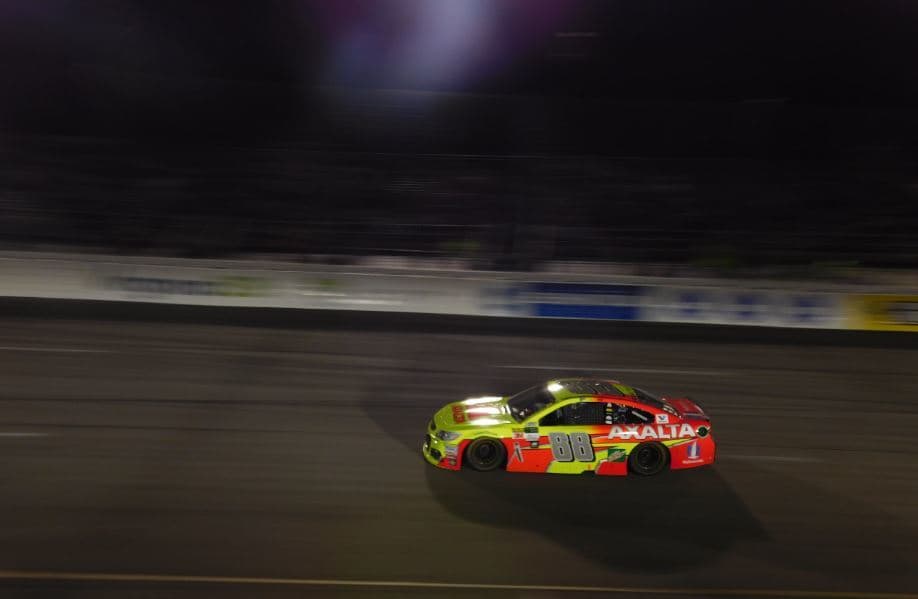 When top-five speed is as irrelevant in your season as race wins, a night like Saturday can do some good.

That’s the story for Dale Earnhardt Jr., the driver on his final 11 races of his Monster Energy Cup Series career, who ran top five before finishing 13th in the Federated Auto Parts 400 at Richmond Raceway.

From the start of the weekend, tension was up, as a must-win scenario to make the playoffs was in store for Earnhardt. Thankfully, his No. 88 Hendrick Motorsports crew brought a solid car, said Earnhardt.

“We tried our butts off to get ourselves a good car, worked on it in practice and it was great,” Earnhardt said. “We were up there racing in the front around guys we should be racing against.”

Though starting from the 21st position, Earnhardt drove into the top 10 well before the conclusion of Stage 1 on lap 100. Driving up to as high as fifth, Earnhardt caught the race lead in the closing stages when the No. 88 team chose to stretch tires and fuel on a shot at winning.

“That’s all we could do to try and win,” he said. “I don’t think we could outrun the top three. We had a long-run car, though, that was really fast. We had to take a gamble on that strategy and that cost us a handful of spots. We weren’t going to win staying on the same strategy as everyone else. We had to try something.”

Unfortunately, for the sport’s most popular driver, the amount of time with old tires came back and bit hard, falling outside the top 20 and losing a lap before the race’s final caution with two laps to go.

And when chaos ensued with Martin Truex Jr. crashing hard in Turn 1 on the final lap, Earnhardt slipped through with a front-row seat to the impact.

“I saw Truex hit hard, I hope he’s OK,” he said. “I don’t really know what happened but we were just trying to get every spot we could — even though we weren’t in a position to win. We were able to get a spot or two.”

Another wild scene out his windshield Saturday night occurred under caution, when the field approached an ambulance truck parked at pit road entry. Narrowly missing the medical vehicle, Earnhardt says that mistake was on NASCAR.

“They probably should’ve waited another lap,” he said. “None of us knew the ambulance was there — at least I didn’t. We come down there and Matt knocked the radiator out of it. I know a lot of guys violated the [pit road commitment] box and I’m glad NASCAR dint penalize them. Because that was on NASCAR, but you can’t get Matt his radiator back after that.”

As Matt Kenseth didn’t get a second radiator, Earnhardt will not get another shot at a NASCAR Cup Series championship. His disappointing farewell season of only one top-five and four top-10 finishes ranks as one of his worst seasons through 18 years in the series.

Despite the negatives, Saturday brought the warm return of competitive pace, something that has been tough to find from the No. 88 bunch this year. With an uplifting run to end the regular season, Earnhardt leaves Richmond hopeful to continue it into the final 10 races.

“When we didn’t have bad luck, we didn’t capitalize,” he said of his season. “We had a long summer. If we ran all year like we did over the last several years, we would’ve made it. We just didn’t do the job.

“I’d love to win a race, but damn, if we can just run as good as we did tonight the next several races, that’d be great for all these guys. They have another year coming up with Alex [Bowman] and they have to get going again.”

Please go before you get hurt in some freak accident.