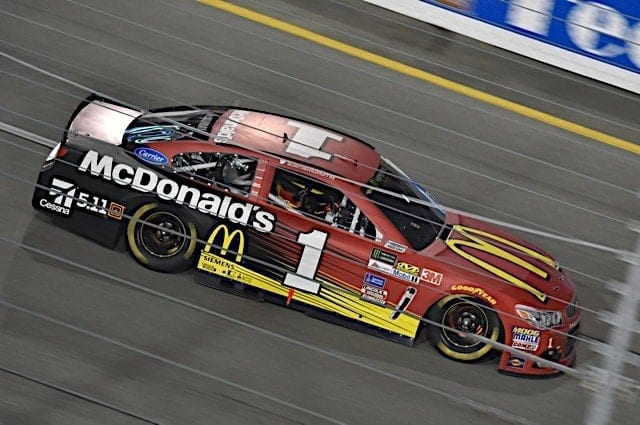 While Kyle Larson soaked in the champagne and confetti in Victory Lane on Saturday evening at Richmond Raceway, his Chip Ganassi Racing teammate Jamie McMurray was upset after running outside the top 10 for the entire 400 lap event.

Despite having an eventful night and never getting the balance of the No. 1 machine right, McMurray earned enough points through the 26 race regular season to qualify for the postseason. It’s his third consecutive year with a shot at the playoffs during the final 10 races, after going his first 12 seasons without one.

Heading into the postseason, McMurray likes his chances of advancing into at least the second or third round.

“The playoffs are about being good at mile-and-a-halves,” McMurray said following a 14th-place result at Richmond. “We have a lot of those. And our mile-and-a-half program has been really good. I feel like we have run better at the faster tracks than we have the short tracks. Going into it, I think our organization is probably better than its ever been. I’m excited about it.”

During the regular season McMurray had a pair of top-five finishes, including a season-best second at Talladega Superspeedway. He placed among the top 10 in 13 campaigns, which equals his second-best single season record.

Being consistent is what could lead to promising results for the No. 1 crew.

“When I look at our year, I think we finished eighth in points in the regular season,” McMurray said. “That’s where we’ve run. We haven’t been a contender to win, but we’ve been like that fifth to 10th place car every single week. I feel like we should be able to finish ahead of quite a few of those cars in the first three races. With the stage racing there is a lot of points that you can gain at a time. I’m excited because we’ve ran so well this year.”

As long as McMurray can keep on advancing and having consistent runs, the back half of the playoffs set up well for him, having a pair of triumphs at Talladega as well as a pair of checkered flags at Charlotte Motor Speedway. He also enjoys heading to Martinsville Speedway, but has placed inside the top 10 in five of the six 1.5-mile tracks this year.

The postseason kickoffs as Chicagoland Speedway where McMurray finished 11th last season. In 2014, the No. 1 car charged from 11th starting position to lead 32 laps early in the race.