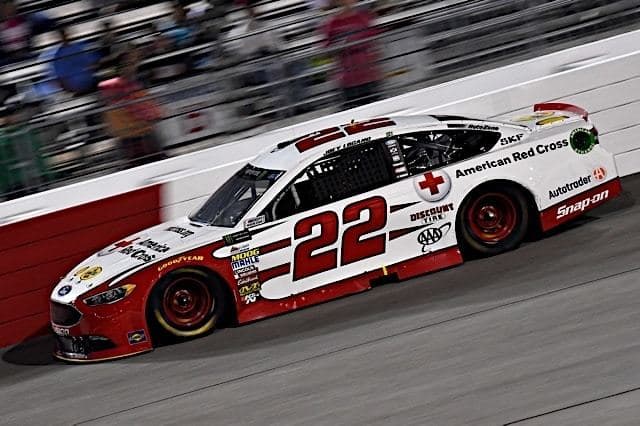 2017 was supposed to be the year of Joey Logano. I admit, he was my championship pick prior to the season kicking off at Daytona in February.

Coming off a year in which he had three victories and finished runner-up in the championship standings to Jimmie Johnson, Logano was supposed to shine this season. And early on, that’s exactly what the No. 22 team did.

Finishing sixth in a bizarre Great American Race, Logano left the event third in the standings. He would go onto finish sixth at Atlanta Motor Speedway and ruffled some feathers with Kyle Busch at Las Vegas Motor Speedway the following week, finishing fourth. Yes, there was the post-race battle royal.

The following week at Phoenix International Raceway, bad luck bit Logano late in the event, finishing 31st after blowing a right front tire. However, steam picked up for the No. 22 crew, posting five consecutive top-five finished and winning the spring Richmond race.

But that’s when the season turned for the worse.

A triumph is supposed to get a team into the postseason, but NASCAR deemed the No. 22 car to be illegal in post-race inspection at the R&D Center in Concord, N.C. That meant the Logano kept the victory on the stat sheet, but he would have to win again or race his way into the playoffs based on points.

Remember that string of five straight races finishing in the top five? That was followed up with five straight finishes outside the top 20, the first time Logano had experienced that since the beginning of 2011 with Joe Gibbs Racing. The No. 22 team fell from fifth in the overall standings to 11th, but with new winners such as Ricky Stenhouse Jr., Ryan Blaney and Austin Dillon, it knocked them even further back on the playoff grid.

Logano snapped the streak of bad luck at one of his best racetracks, Michigan International Speedway, finishing third. But the sprint to the playoffs wasn’t going to be easy as he had another DNF at Daytona in July and a mechanical issue at New Hampshire Motor Speedway, both resulting in finishes of 35th or worse. Crucial points were lost.

But all is cool, right? Some of Logano’s best tracks were still remaining; Watkins Glen, another stop at Michigan, Bristol Motor Speedway and oh yeah, the regular season finale at Richmond.

About that. Logano went to Watkins Glen feeling like he could still make it on points, though sitting 69 markers behind Matt Kenseth heading into the event. The No. 20 team was also starting to find its stride after being sluggish through the first 20 events.

The race at the Glen was filled with strategy, something crew chief Todd Gordon relied a lot on over the last quarter of the regular season. Finishing 24th and Kenseth almost getting the victory (second), made it all but a must-win with now four races remaining until the postseason kicked off.

At Michigan, Logano finished 28th. Going into Bristol, he had won two of the past three night races in August and started on the outside of the first row. He dropped back from the green flag, finishing 13th.

Darlington, another game of strategy, and a car that wasn’t handling well and Logano came home 18th, having to win at Richmond, one of his better tracks. Remember, he did win after starting from the back in April.

On Friday, Logano made it to the final round of qualifying, posting the 12th fastest time. As soon as the race began on Saturday evening, the car remained neutral throughout much of the opening stage, finishing sixth as is came on during the long runs.

During the second stage, Logano ran toward the back half of the top 10, just a notch off of what the leaders of Martin Truex Jr. and Kenseth were running. The No. 22 team worked its way up to finish the stage in fourth, just behind the Nos. 78 and 20 cars, as well as Erik Jones, who also needed a victory to make the playoffs.

The final stage saw a run of over 130 laps of consecutive green-flag racing. Until a caution with three laps to go, Logano had no shot at winning as the laps were dwindling down. Gordon called him to pit road much earlier than a lot of the other lead lap cars, which was a short term gaining, moving him as high as second, but with older tires, falling to 10th prior to the yellow flag.

He had to do something different on the pit stop, right? Wrong. Tire fall off was so crucial, and Logano was behind so many lapped cars that even if the team elected to take two tires, he wouldn’t come out first. Instead, he came out 10th, and locked to have no shot at getting close to the front.

Logano, known as being one of the best on restarts, had one helluva restart, getting up to fourth by Turn 1, as drivers in the inside lane missed shifts and some in the outside lane overdrove the first turn. Denny Hamlin got into Truex on the last lap, scooting by was Logano, but came up one position short of the needed victory.

“We came into the weekend saying second would be a failure and we finished second,” Logano said in disappointment. “One spot short. Overall, I’m so proud of this team. We came in here with the pressure on us and we executed the best we could. We scored some stage points, which doesn’t mean anything, but we were up front at least. Came up short there at the end. I had a good restart.

“The run before that we short pitted and we lost a lot of speed that run and lost all of our track position and fell out of the top five and just fought hard there at the end to basically make something happen. They almost all but brought out a caution. Overall, we have 10 races to go and we’ll make it exciting for everyone that’s in the playoffs. We’ll be a car running for the win that’s out of it [playoffs]. It will be interesting for us. It’s the end of our championship run, but its not the end of our season. We still have a lot to race for.”

The way the NASCAR points system works is Logano can finish as high as 17th in the championship standings following the season-finale at Homestead-Miami Speedway in November. In all likelihood, the team might use it as a test session for 2018 as teams that miss the post-season often do.

It’s the first time since coming to Team Penske in 2013 that Logano has failed to have a shot at the title during the final 10 events of the season.

There were a lot of should have, could have and would have moments for the team. But now that reality is beginning to sit in, one of NASCAR’s “bad boys” is out of contention.

Again, Logano was my pick for the championship, and quite honestly, he probably will be again next season. The 27-year-old will be entering his 10th full-time season (hard to believe), and is going to have venom running through his veins with the disappointing end to the 2017 regular season.

After that “ENCUMBERED” BS, now way did I ever think he would not win another race, it was in the bag. WRONG!!!!!!!!!!!!!!!!!!! Shocker to a lot of people. The team failed this year big time! Todd Gordon better get his head out of his ass for next season! Logano had him ride along with him on the contract extension!