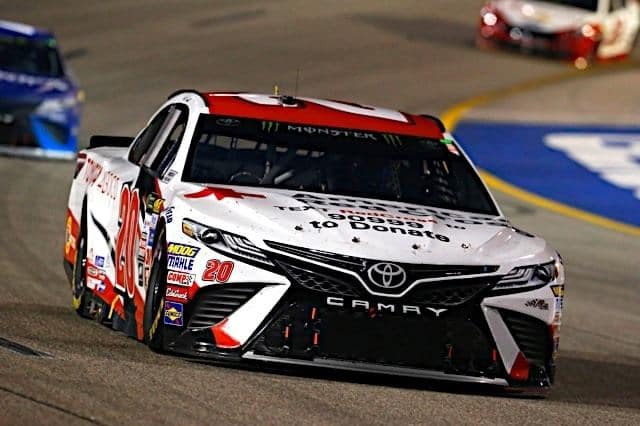 There are certain NASCAR races that will forever live in infamy.

While there is no shortage of races in which the competitors were responsible for the controversy, NASCAR and its partners have, from time-to-time, caused confusion among the fan base for poor officiating and ill preparedness.

Nobody will soon forget the tire debacle during the 2008 Brickyard 400.  Fans still debate the scoring snafu at North Wilkesboro Speedway in 1990 that contributed to Brett Bodine’s only victory at NASCAR’s top level.

There was even a race at Asheville-Weaverville Speedway in 1961 in which the track surface deteriorated so much that NASCAR cut the race short after 258 of the scheduled 500 laps.  The fans were so incensed by NASCAR’s decision that an angry mob blocked the racers from leaving the track, nearly starting a riot before order was restored.

Saturday night’s event at Richmond Raceway probably will not become as notorious as those races.  Yet thanks to a wayward ambulance obstructing the entrance to pit road during a lap 257 caution, NASCAR had a real mess on its hands.  Drivers were forced to dodge the ambulance and immediately swerve back to the left to avoid a commitment-line violation.

In the confusion, Matt Kenseth slammed into the back of Clint Bowyer, damaging both cars.  The No. 20 team had to drop out of the race with a busted radiator.  Bowyer was able to continue, but the No. 14 team lost all of its track position and fell out of contention for the win.  Joey Logano also received minor damage in the incident.

To make matters worse, Richmond was a critical race for all three drivers.

Kenseth was clinging to one of the last available playoff positions.  Bowyer and Logano were both outside the playoffs, needing a win to get in.  Kyle Larson’s victory ultimately guaranteed that there would be no change in the playoff picture.  That said, it is embarrassing that NASCAR’s inability to communicate with the safety crew impacted the race and the playoff fight.  The fact that the miscommunication nearly cost Kenseth a spot in the postseason is inexcusable.

Suppose that Saturday night’s race had produced a new, playoff-eligible winner?  Erik Jones appeared to be the most likely driver who could secure a last-minute victory.  Jones did not have the car to keep up with teammate Martin Truex Jr. (nobody did), but the rookie was lurking in the top five when the final caution flew with four laps to go.  At that point, the race was anyone’s game.

If Jones had won, Kenseth would have lost the last playoff spot to Jamie McMurray by five points, a position that he was in only because of NASCAR’s error.  The sanctioning body was lucky that Jones missed a shift on the final restart and did not seriously challenge for the win.

Logano, however, did.  After lining up 10th for the overtime restart, Logano made a spirited charge through the field, taking the white flag in fourth, and ultimately winding up second after Truex and Denny Hamlin tangled on the last lap.  Unfortunately for Logano, second was not enough to get him into the playoffs.

Up to that point, Logano had been running better than he had in several weeks.  The mess with the ambulance left him with a cave-in on the left front nose of his car.  That damage could have easily contributed to Logano backsliding over the last long green flag run.

Logano’s positioning on the final restart likely helped him avoid the incidents that swept up some of the drivers in front of him.  Yet if Logano had not gotten damaged and been closer to the leaders for that restart, could he have challenged Larson for the win?  We will never know for sure.

The incident with the ambulance hung over the last third of the race like a black cloud.  NASCAR had backed itself into a corner.  Even if the playoff picture ultimately did not change, the sanctioning body still had questions to answer.

Why was pit road opened with an ambulance in the way?  Why did Kenseth get put on the five-minute crash clock when the commitment-line penalties for other drivers were waived?  In fact, it is fair to wonder why there was an ambulance anywhere on track in the first place.  Remember that the caution was for Austin Dillon spinning Danica Patrick.  Patrick never hit the wall or another car.  Furthermore, that incident was in Turn 1.  So why the ambulance near pit road entry?

NASCAR Vice President of Competition Scott Miller offered some insight after the race.

“It’s not like this is a common occurrence for us,” Miller added.  “It was a very strange thing.”

And keeping the No. 20 team on the crash clock?

“That was a major repair,” Miller said.  “(They) would’ve had to change the radiator.”

“I don’t think it really would’ve changed his day any,” Miller continued.  “It would’ve taken probably 15-20 laps to change the radiator.”

Miller’s explanation was sufficient, but only to a point.  If the ambulance drivers did not listen to NASCAR, that is the safety crew’s fault.  Yet NASCAR does have complete control of when pit road is open.  Keeping the light green with an ambulance in the way makes the sanctioning body look inattentive.

Furthermore, NASCAR clearly acknowledged that the ambulance caused the commitment-line violations by waiving the penalties.  Yet the ambulance also caused Kenseth’s damage, too.  Waiving the rules for some drivers and not for others is the inconsistency for which the sanctioning body is so often criticized.

Most disturbing is Miller’s assertion that the ambulance incident was not “a common occurrence” and “a very strange thing.”  Factually, he is correct.  But the fact that it happened once, and in such a critical race, is still unacceptable.

NASCAR cannot shrug off the incident like it was not a big deal.  The ambulance was a big deal for Kenseth, Bowyer, and Logano, and it could have easily been a big deal for the sanctioning body if it had changed the playoff picture.

Ultimately, NASCAR does not have much positive momentum heading into the playoffs.  Saturday’s race followed another frustrating week of discussions about encumbered finishes.  Not to mention that the caution with four laps to go was highly questionable and left Truex as a rather frustrated regular-season champion.

Now, instead of building excitement for the playoffs, NASCAR faces a week of fans questioning its competence in officiating.  That is too bad, but after Saturday night, it is exactly what the sanctioning body deserves.

The caution at the end that screwed over Truex and the 78 team is a regular occurrence for NASCAR the past several years. Hell they have even thrown cautions for a driver that lost control but did not actual spin out, crash, hit anything, etc.
NASCAR itself from a sanctioning body standpoint has become a joke in the past 14 years maybe even more than that. There is a reason fans have left and stopped watching and Scott Miller’s “explanation” into the whole fiasco is exactly the reason why. What a farce NASCAR has become. Feel really bad for the teams as they are stuck with the b.s. and incompetence of NASCAR leadership.

NA$CAR IS A DUMPSTER FIRE!

I get so tired of the constant criticizing of NASCAR! Give ’em a break, they have only been doing this for 69-years…they’re still working the kinks out.

Gab, Gab, Gab! Pay attention mate! As was delineated LIVE on TV seconds after the incident transpired, the ambulance incident had NADA to do with Nascar, or the control tower. It was as if a fan spontaneously drove out on the track. The ambulance was not directed on the track by race control & presumable just decided to go for a joy ride. Very odd that similar incidents seem to continually occur at RR. I think this is 3 consecutive races where there’s been incidents where track safety vehicles have affected the results. It’s as if RR is hex’ed. Perhaps it was constructed over an Edsel burial ground?
Regardless, the #20 incident was DRIVER ERROR. There is a stack-up practically EVERY SINGLE TIME cars enter the pits under yellow at practically every venue. Surely the Ambulance stopping on the pit commit line as cars were entering the pits was bizarre, but the ambulance drivers were not in control of #20’s or anyone’s steering wheel or brake pedal!
Wave pit-commit like violations – YES.
Wave crash damage – NO!
Wave “chase” qualification rules – NO!