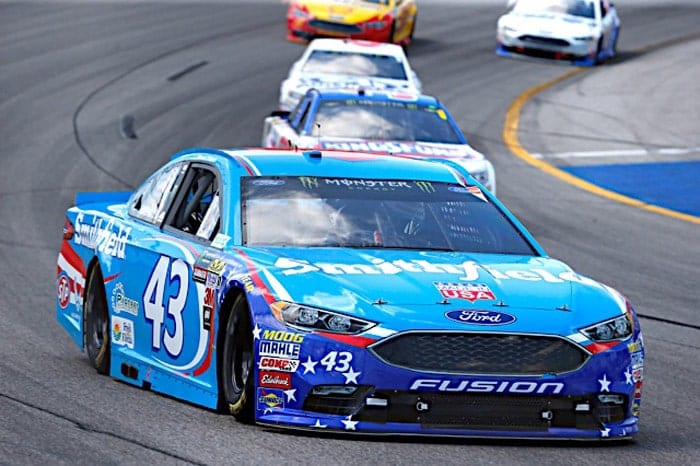 ONE: Smithfield’s Shifting Gears Away From Richard Petty Motorsports

Tuesday morning (Sept. 12), Smithfield announced it’s leaving Richard Petty Motorsports to join one of the Stewart-Haas Racing Fords. After six years partnering with the No. 43, the strength of SHR’s multi-car organization (which has two of its four cars in the playoffs) became too good to pass up.

“We feel this move will improve our competitiveness on the track,” said the packaged goods company, elbowing its former partnership on the way out the door.

It’s true that RPM, despite some improved performances this year, has lagged behind top competition. It’s posted just six top-five finishes and 33 laps led in 170 starts since the beginning of the 2015 season. During that time, it’s slimmed down to a one-car program and struggled competition-wise, with a choice to have more control over chassis development.

The Smithfield release did not mention what team or driver it’d be aligned with going forward. That means whether longtime driver Aric Almirola moves with Smithfield to SHR remains unclear. Even if he doesn’t, the loss costs him a bargaining chip in a bid to remain driver of the No. 43 for 2018. Motorsport reported the company was selling Darrell Wallace Jr. for the ride next season, not Almirola, which clues you in on RPM’s future direction.

Later Tuesday, we discovered Almirola is likely to head to SHR as he announced his departure from RPM. That also came with a pointed statement from Richard Petty Smithfield had backed out of a handshake deal, sparking a war of words between legend and soon-to-be-former sponsor.

“Smithfield is a performance driven company and we demand performance from the people we do business with,” Smithfield CEO Kenneth Sullivan said. “For that reason – and that reason alone – Smithfield decided not to renew its contract with RPM when it expires at the end of this year.”

Whomever’s right is irrelevant at this point. What we do know is Smithfield’s departure means it’s a make-or-break moment for NASCAR, RPM and its diversity program. Under the right circumstances, Wallace could still be the first full-time African-American driver in the Cup Series in over a decade. Partnering with RPM and the legend of Richard Petty would be a great story, the type of positive spin this sport needs. Wallace had a reasonable 17.8 average finish in four starts with the team, including an 11th at Kentucky Speedway, and kept his nose clean. The 23-year-old has six career Camping World Truck Series victories and has proven he belongs somewhere in the sport.

Should RPM and Wallace strike a deal for 2018, aligning with proper sponsorship elsewhere, that’s great news. If not? The reality is one of the sport’s top diversity drivers sits on the sidelines after a multi-million-dollar sponsorship said, “no thanks,” to go with the blue-chip alternative.

Even worse, the decision could force RPM to close altogether, leaving NASCAR with yet another legendary name out of commission. The symbolic nature of Petty, who turned 80 this year, owning a team isn’t lost on an older fan base, many of whom grew up cheering for the Hall of Famer. What does it say when such a famous last name can’t be enough for anyone to jump on board financially?

Smithfield’s decision is only the first domino to fall. The question now is whether co-owner Andrew Murstein, Petty and/or Wallace can stop the fall of RPM.

TWO: Cope-ing with the Richmond Aftermath

It’s ironic at best that Derrike Cope parted ways with Premium Motorsports one day after his late-race wreck caused NASCAR to throw a late caution flag. His No. 15 Chevrolet still finished the race, albeit 16 laps down, while wall contact forced a NASCAR overtime that robbed Martin Truex Jr. of a win and five valuable playoff points.

Truex, who lost out to Kyle Larson, had insult added to injury when Denny Hamlin spun him out entering the white-flag lap. Left with a wrecked racecar and his championship rival closing the gap between them, it’s no surprise the normally mild-mannered Truex lost his cool.

“I just think that’s ridiculous that a guy could cause a caution with one lap to go as bad as he’s running,” he said. “Just riding around there basically just making laps. Yeah, it’s pretty dumb.”

Truex’s words had some truth to them. Cope, the 1990 Daytona 500 winner, was moonlighting in a handful of races this season for Jay Robinson. While the 58-year-old brought sponsorship to the table, he never finished any race inside the top 30. Cope was at least seven laps off the pace in every race he ran; the No. 55 was the slowest car still running in nearly all his starts.

Whether Cope should still be out there in the first place is a discussion for another day. But when it comes to Richmond Raceway, you can’t blame the turtle for a choice he didn’t make. NASCAR officials made the call to throw the yellow, not Cope, when you could see on live television the No. 15 car was out of harm’s way. That’s on them.

As for Cope? It’s a shame what could be his final season of Cup racing will be marred by what was an otherwise harmless incident. Cope was just out there making laps; he wasn’t wrecking anyone else. There’s no shame in that.

THREE: To the Victors Go the Spoils

It’s still hard to evaluate NASCAR’s new playoff points before we’re all the way through to Homestead-Miami Speedway. All we can say right now is it’s unlikely a guy like Jamie McMurray will end the first round leading the standings; he’s sitting 50 points behind Truex entering this weekend at Chicagoland Speedway.

But for those in the 16-driver field who didn’t accumulate playoff points during the season, moving through to the next round still seems rather easy. McMurray is just three points behind five drivers ahead of him tied for 11th place. You only need to run 12th or better to advance to the next round; better yet, you win and points become irrelevant.

Down the road, men like Truex and Larson may have an edge to Homestead because of their large advantage on top of the standings. But for anyone in this 16-driver field, there’s a path to the title. A few extra points near the top don’t make the challenge insurmountable.

Plenty of fans were disappointed Dale Earnhardt Jr. failed to make the postseason. But they had to be heartened by how competitive the No. 88 Chevrolet was during the race at Richmond. Earnhardt was at times a top-five car and even led 13 laps during pit strategy late in the event. That’s the most he’s led during any race all season long.

Looking ahead, Earnhardt’s not the only one in prime position to play playoff spoiler. Joey Logano ran second, earning his best finish since winning in the spring. Rookie Erik Jones, who finished sixth, earned his sixth straight top-1o result. Both Jones and Daniel Suarez are pushing hard for Rookie of the Year and remain two of the hottest drivers in the sport.

These four men, aligned with quality programs, are now in prime position to cash in the rest of the way. Since the current 10-race playoff format began in 2014, NASCAR hasn’t had a winner break through outside its 16-driver field.

Finally this week, we’d be remiss not to mention our thoughts and prayers are with those suffering through damage caused by Hurricanes Harvey and Irma. More than 6 million are without power in the southeast as of this writing; over a quarter of houses in the Florida Keys were destroyed by Irma.

The two NASCAR tracks in harm’s way, Homestead and Daytona International Speedway, were lucky to escape major damage. More importantly, the sport has shown its giving spirit during these trying times. Many of its tracks opened as campgrounds over the past week for citizens who had to evacuate their homes. Tens of thousands in donations have already been pledged by NASCAR drivers, sponsors and affiliates to help people get back on their feet.

If you’d like to make a donation to help hurricane victims, you can do so through the NASCAR Foundation. Best wishes to all affected for a quick, speedy and safe recovery.

It wasn’t that many years ago that the plan was to have 10 teams, each with 4 cars. Obviously that went by the wayside. Then it was to add value to the teams by forcing anyone who wanted to be an owner to invest in an existing team rather than form a new one.
Guess we will see how that is going to work now.

Here is an idea. Bring back time trials on Saturday fast 25 make the show. Remaining entries run a 50 lapper top five make the race. The rest go home to work at getting faster. keep the field fillers off the track.

Why don’t we just go back to the way it was. Don’t care about playoffs don’t care about templates. May as well change the name to Ciroc where all cars were identical

Did someone from SHR poach them from RPM? Kinda lame, it happens…but who is going to be the big bang for the buck driver at SHR? I know who I hope does not go there, shame on SHR and FORD if that person goes there.

I’m going to guess 90% of Nascar fans don’t care about the color of Darrell Wallace’s skin. The feel good part of the story would be that a quality up and coming driver gets a shot at a Cup ride. Why can’t we just leave it at that? Tired of constantly having diversity and inclusion stuffed down our throats at every turn. Now its the Nascar media getting in on it.