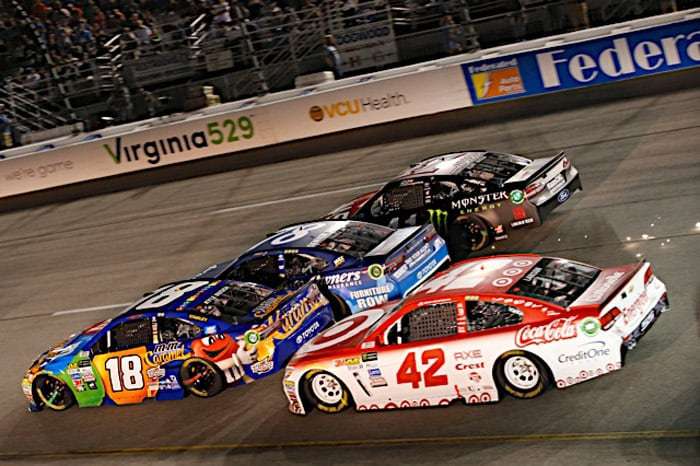 Ah yes, cutoff weekend.  Where some drivers jump for joy while others kick the can.  Last weekend, the Monster Energy NASCAR Cup Series was in action at Richmond International Raceway for the last race of the regular season.  You had long runs and short runs.  Stretches of constant side-by-side racing and times where not much was going on.

Prior to the race, the obvious focus was on the playoffs and those trying to lock themselves in.  However, all that coverage didn’t really stand out.  It was expected, to be honest.

What stood out was a piece where Nate Ryan made the short drive to Davidson, N.C. to talk to Jerry Nadeau.  Nadeau, a former Cup veteran, suffered near-fatal injuries in a practice crash at Richmond back in 2003.  The following clip aired on an episode of the long-defunct SPEED News with Rick Benjamin.

Today, Nadeau likes to race on iRacing, but that’s all he can do, racing-wise.  The piece covered Nadeau’s memories of his career, what he could remember of the fateful day at Richmond (breakfast, and that’s about it) and his recovery.  Recently, Nadeau announced his intention to donate his brain to science.  He explained his reasoning for doing so in the segment.

Ever since Nadeau’s crash, he hasn’t made all that many appearances on television.  This was only the third appearance that I can remember in the last 12 years.  He looked a lot better here than when he sat in on an episode of NASCAR RaceHub last year.

We’d link you to the video on NBCSports.com, but they’re advertising a benefit for Hurricane Harvey victims at press time that will be airing Tuesday night on NBC.  At least for me, viewing the piece was impossible.  However, way back in 2006, Nadeau did this interview with Wendy Venturini that aired on SPEED’s NASCAR RaceDay.  The physical difference between then and now is effectively some tingling on his left side, and that’s about it.

Honestly, this was quite the piece.  While it doesn’t necessarily look like it, life has been a struggle for Nadeau for most of the time since the crash.  Based on his past appearances on TV, it appears that he has good days and bad days.  He appears to be at peace with never racing again, but that doesn’t stop him from going fast.  His job consists of giving “thrill rides.”

Of course, the most memorable moment from Saturday night was the now infamous rogue ambulance on lap 257.

NBCSN did not catch this live.  You could see a couple of drivers locking up out of nowhere, then the shot from the Smithfield Foods-sponsored aerial platform pans to the left where you could see the ambulance.  At first, it was business as usual for the stops, then they noticed Matt Kenseth stopped on pit road and about to go to the garage.

This is not the first time that the track crews have come into play at Richmond.  In fact, it is the third time in two years.  Back in in the spring, a safety truck was sitting in the middle of the track as pit road was opened, causing chaos.  Martin Truex Jr. picked up a nasty commitment line penalty with less than 40 laps to go because of it.

Two years ago, Michael McDowell actually hit a safety truck under caution and wiped out the rear end of his No. 95 Ford.  The incident actually put him out of the race.  The coverage of the incident, the extent of which is in the below clip, was very underwhelming at the time.

The general opinion of the booth was completely understandable.  NASCAR shouldn’t have opened pit road.  Problem is, had NASCAR noticed the ambulance there and quickly re-closed the pits, that would have caused chaos as well.  Yes, it would have caused some arguments, but everything ultimately would have been fine.

Whoever the deuce was driving the ambulance outright disobeyed NASCAR.  It was not needed on the track at all.  Danica Patrick pulled away on her own without assistance.  She didn’t even hit the wall.  To benefit those affected, NASCAR waived all commitment line penalties that could have been assessed.  That’s nice.  NASCAR learned from their mistake back in April.

However, they completely screwed over Kenseth.  NASCAR put Kenseth on the crash clock, which put him out of the race because of the radiator damage caused by the stack up.  This is bush league.  No clue why these stupid things keep happening at Richmond.  All we can see is that something has to change.

At least Kenseth was able to keep his composure and not completely explode on live television.  That’s the sign of a true veteran.  Also, he kept his dry sense of humor as well.

For all we know, that’s the same ambulance in Kenseth’s tweet that screwed his race.  It is from the same group (ETS).  Can’t quite tell on the broadcast, though.

Personally, I was against the damaged vehicle policy from day one.  It doesn’t save jack.  It simply operates against human nature in an attempt to cut down on debris cautions (as far as they’re concerned, if they’re legitimate, they’re OK by me).  Saturday night’s lunacy only strengthens my hatred of it.

No one could honestly have predicted the ambulance driver’s actions.  The only thing that we can probably say for sure right now is that the ambulance driver will get more than the black flag shown to Richard Petty at Darlington.  He/she won’t be back for any more NASCAR weekends.  NASCAR will probably do what is sometimes done to truck drivers.  A customer in extreme cases can state that a specific driver cannot make deliveries somewhere as a result of a previous instance.  I could see that happening here.

During the race, there was quite a bit of action for position.  Early on, NBCSN did a pretty good job of showing that action.  However, as the race continued on, the focus seemed to narrow a bit.  There was healthy usage of the split-screen for battles as well.

There was plenty of time spent touting the stage format and how it makes the races better.  We know that Jeff Burton believes that.  He states it on a regular basis on Twitter.

If you don't think stages have made the races more exciting then you haven't been watching. It's not even a reasonable debate https://t.co/iv9uCSuUsJ

Having stage racing is not necessary to produce the type of racing that we currently have in NASCAR.  You could easily have had it with the previous format.  The only reason we didn’t seems to be that the teams didn’t want to put that show on.  Honestly, the stage racing was probably created so that fans wouldn’t have to put up with the entirely subjective “100 percent” ruling that Brian France stated back in 2013 after Spingate.

Also of note, Richmond races have improved quite a bit since the downforce was cut, possibly the most out of any oval on the schedule.  Having multiple grooves makes the races there so much more enjoyable to watch, both live and on TV.  Having a daytime race there is nice as well, but you can’t do much about 94 degree weather in late April.  As a result, we don’t get a day race at Richmond next year.

As you know, the race came down to a Green-White-Checker finish as a result of Derrike Cope hitting the wall in turn 4.  While NBCSN didn’t catch the crash live, viewers did see the contact.  More than enough footage to prove that it wasn’t a phantom caution.  What actually caused the wall contact was unclear, but it did not appear to be a cut tire.  Regardless, Martin Truex Jr. proceeded to throw Cope under the bus after the race, claiming that Cope didn’t deserve to be on the track.  Did the incident have anything to do with Cope and Premium Motorsports splitting up on Monday?  That’s unclear.  My thought would be no, but you never know in motorsports.

Post-race coverage was quite extensive, but that was likely because of the race serving as the playoff cutoff.  Viewers got interviews with all the contenders and a couple of the chaps that missed out.

That said, the race itself is still important.  The idea of Ryan Newman finishing third and not getting an on-air interview until the very end of NASCAR America Post-race really chafes the butt cheeks.  The dude got a podium and you don’t air an interview with him for darn near an hour?  What the deuce?

That’s all for this week.  After a somewhat paltry amount of action last weekend, there’s plenty on tap this week.  All three of NASCAR’s National Series will be in action at Chicagoland Speedway.  For Cup teams, it will be the first race of the playoffs.  Also, there will be slime.  Anyone who wins will likely have to go get a change of clothes and a shower before their post-race press conference.

Meanwhile, Sonoma Raceway is hosting the season finales for both the Verizon IndyCar Series and Pirelli World Challenge’s GT, GTA, GT Cup and GTS classes.  Formula One returns to action at Singapore with Bob Varsha on play-by-play in place of Leigh Diffey (Diffey will be in Sonoma).  Finally, the FIA World Endurance Championship will make their (for now) final appearance at Circuit of the Americas in Texas.  TV listings can be found in the Schedule tab.

I will provide critiques of the Cup, XFINITY and Camping World Truck Series races from Chicagoland in next weekend.  For the Critic’s Annex, we’ll cover Friday night’s Virginia 529 College Savings 250 and Road to Race Day, a series that follows Hendrick Motorsports at go90.