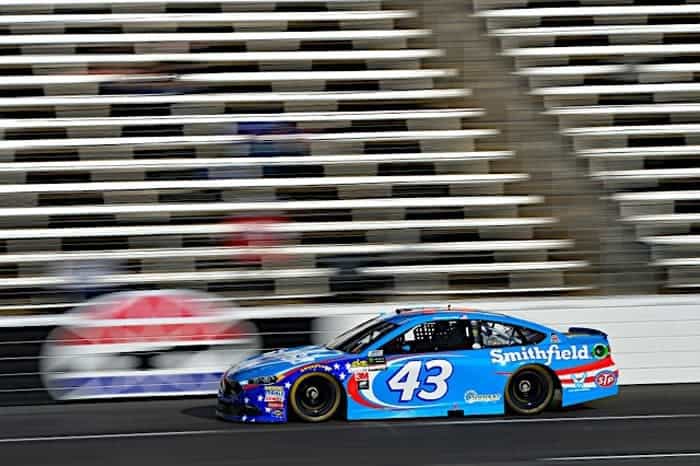 Smithfield Foods will end their primary sponsorship of the No. 43 Richard Petty Motorsports Ford after the 2017 season. The company announced Tuesday it will join Stewart-Haas Racing as a sponsor in 2018 after over five years with RPM.

“The decision to leave Richard Petty Motorsports and join Stewart-Haas Racing was difficult,” a statement from Smithfield on its Facebook Page said. The company had been in negotiations with RPM for several months before undergoing a change of heart.

“SHR has vast resources, both on and off the track, that will improve our competitiveness and strengthen Smithfield’s position as a leading consumer packaged goods company,” Smithfield President and CEO Kenneth Sullivan said. “Smithfield will also benefit from SHR’s connections with other food companies.”

Primary sponsors for SHR currently include the Jimmy John’s restaurant chain, a company which backs Kevin Harvick for 16 races. SHR has also had a relationship with Outback Steakhouse and has smaller partnerships with several other food-based companies.

Though Smithfield will be a primary sponsor for SHR next season, the company has not announced which car or driver it will be backing. The No. 10 car was later made available as Danica Patrick announced she would no longer drive for SHR after the 2017 season.

Later in the day, Richard Petty Motorsports confirmed the departure of Smithfield in a team release. Team principal Richard Petty disputed the turn of events.

“Over the past few months, Smithfield had continually told me they wanted to be with us,” Petty said. “I recently shook hands on a deal to extend our relationship.  I come from a time when we did major deals like STP on a handshake.”

Smithfield, in response gave a scathing rebuke on their Facebook page Tuesday evening.

“We are extremely disappointed that Richard Petty Motorsports (RPM) has chosen to disparage Smithfield – its lead sponsor – after five years and tens of millions of dollars of unwavering financial support, despite years of subpar performance on the track,” Sullivan said. “RPM’s claims of a ‘handshake deal’ to extend our sponsorship are unequivocally and patently false.

“Smithfield’s numerous discussions with RPM over the past several months focused exclusively around one issue: RPM’s inability to deliver on the track and the organization’s repeated failure to present a plan to address its lack of competitiveness. Smithfield is a performance driven company and we demand performance from the people we do business with. For that reason – and that reason alone – Smithfield decided not to renew its contract with RPM when it expires at the end of this year.”

Smithfield began backing Aric Almirola’s entry at RPM in 2012. They later extended their contract with the organization, covering the majority of the MENCS schedule two years later.

But throughout their partnership, RPM made the playoffs only once, in 2014. Almirola won just one race over the same five-year stretch, at Daytona in July of that year.

A 2018 sponsor for the RPM car has not been announced. Almirola also confirmed he was leaving the team later Tuesday amid speculation he would be joining Smithfield over at SHR.

The signs are there that could well be the end of the road for RPM. Not so much because of the sponsorship, as they come and go these days. But not renewing the lease for the shop, with no apparent alternative is a different matter. So apparently there has been something going on for some time.

Don’t know if it’s true that Smithfield had a ‘handshake’ deal with RPM, but if so, I am disappointed in the company.

Exactly right, something has been wrong with Petty for awhile now. I have to laugh at the lame media that keeps saying Wallace is going to drive for Petty, drive what is my question. Petty is done. That same media said Smithfield was going to back Wallace, how did that story work out media. Wallace can’t win in xfinity, hasn’t in 3 years, so explain how he can in Cup please. Bye Petty.