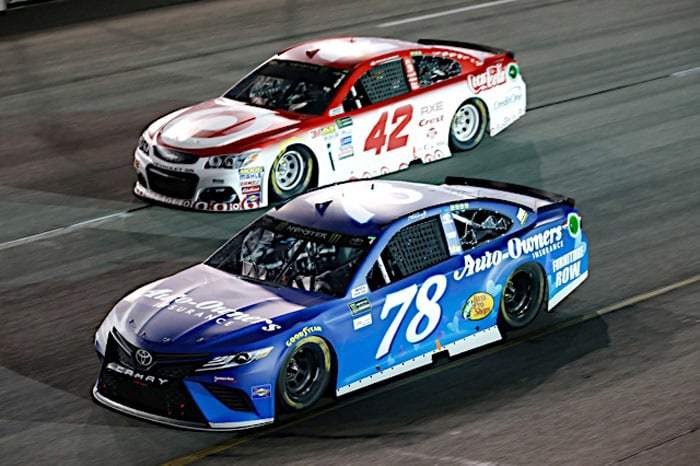 NASCAR’s version of the playoffs is here starting this week at Chicagoland Speedway. But the playoffs for some were this past Saturday night in Richmond. None of on the outside of the playoff picture were able to photobomb that picture and steal a little attention to those already in at the start of the night. And Kyle Larson showed us once again it’s not always about how many laps you lead, but when you lead them, that matters the most.

HOT
Larson’s crew got the job done in the pits and then Larson got the job done in the overtime for his fourth win of the season. It seemed a bit odd that Larson was so surprised that he won on a short track considering all of the successful short track racing he has done on the dirt in the sprint cars this summer. But here’s the thing about Larson. As things stand right now, it looks like he is the best bet to keep either Martin Truex, Jr. or Kyle Busch from winning the title (nothing against either of those guys, but they have simply been the most consistent two drivers all year). The one big key for Larson, especially in his last couple of wins, is that they came down to late restarts and now he’s got that part of the equation figured out. That certainly will make him at the very least dangerous, if not one of the favorites, to make it to the final four at Homestead.

NOT
If you had to list disappointing performances this year in Sprint Cup, the encumbered Joey Logano’s 2017 campaign would certainly have to be one of them. Logano did visit victory lane after the first race at Richmond, but post-race inspection found his car had a major violation and the win was considered encumbered and did not count in the standings. It seems the No. 22 team never recovered from that. Of the three Penske-affiliated drivers, Logano led the least amount of laps and is the lone one to not make the playoffs. It would have been an upset pick to think Logano, who is in his prime at age 27, would not make the playoffs this year. He has plenty of years left, but who is perceived to be on the way up in his career has a down season when he is part of a major team, it leaves a lot of questions to be answered for 2018.

HOT
Nobody would have blamed Matt Kenseth if he would have been really upset about an ambulance being parked at the commitment line at the same the time the pits opened during a caution Saturday night. The surprise location of the emergency vehicle caused a big stack-up for cars trying to get onto pit lane, and Kenseth said he couldn’t slow down in time. That caused him to bump the car in front of him enough to bust his radiator and end his night. Kenseth was good-natured about the incident afterwards. He added to the levity a bit after the race and after knowing he had made the playoffs, when he joked on social media about not being able to leave the track quickly because the ambulance was in front of him. That pit road ambulance incident was certainly a rare site, but give kudos to Kenseth for keeping it a laughing matter.

NOT
On the other side of the ambulance issue, the miscommunication that led to the incident is something that simply can’t happen in any race, let alone a race where playoff spots were put in jeopardy. With sponsors being so sensitive (see Daniel Suarez and Subway as exhibit A), whether a team makes the playoffs or not could well decide if a sponsor continues into the next season. There’s also the matter of a safety vehicle being in harm’s way, even on a yellow flag (see Juan Pablo Montoya’s jet dryer crash as Exhibit B) and the potential for the people riding in the ambulance to get injured. Luckily, NASCAR drivers are good enough to avoid such an accident 99.9 percent of the time. But even that .01 percent of a possibility is too much there.

HOT
When it comes playoff time in any sport, generally speaking, the teams that have performed best in the regular season also perform the best at the most important time of the year. So that leads to the aforementioned Truex and Busch who have by far been the most consistent drivers when it comes to being in front of the field. Truex has led a remarkable 1,646 laps this season and Busch an impressive 1,349. After Larson’s lap led total of 971, no one else has led more than 604. The one good thing about a playoff system is that if a driver gets hot at the right time (see Tony Stewart 2011 as Exhibit C), anything can happen. But Truex and Busch are the clear to favorites here. They’ve proven that over 26 races in the regular season and there’s no reason to think the next 10 races will be much different.

NOT
With 16 drivers in the playoffs, there are bound to be a few who simply don’t have much of a chance to advance past the first round. One of those would be Austin Dillon who led a total of 11 laps this season. He led at least one of the right ones, as did Kurt Busch, with his 13 laps led so far, in order to get a coveted win and a playoff spot. Dillon and Busch are joined by playoff qualifiers Ricky Stenhouse Jr., Kasey Kahne, Ryan Newman and Jamie McMurray in leading less the 50 laps so far this season. At least two of those guys will make it to the second round. McMurray has at least consistently run in the top 10 so he may have the best chance to move on. But the next one to make it is anybody’s guess.

Predictions
With the playoffs upon us, those 16 drivers and teams will be down to serious business this week while preparing for Chicagoland. The Stewart-Haas team has always performed well there and for that reason, I’m going with Kevin Harvick as the winner this week. The deep sleeper underdog who you might not think about pick is . . . Austin Dillon, just because I said earlier he doesn’t have much of a chance to make it to the next round.