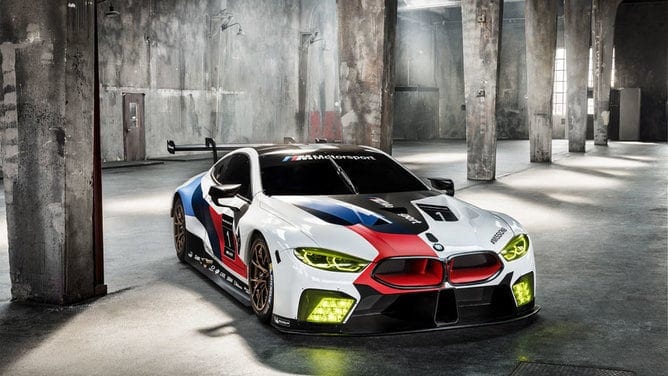 On Tuesday, BMW’s new M8 GTE made its public debut at the International Motor Show in Frankfurt am Main, Germany.  The new factory designed and built racer will compete full-time in both the FIA World Endurance Championship and the IMSA WeatherTech SportsCar Championship full-time in 2018.

BMW-Motorsport is very excited about the new car.

“The BMW M8 GTE is our new GT flagship and will go head to head with the strong opposition in this sector,” said Jens Marquardt, BMW Motorsport Director.  “For us, the presentation of the uncamouflaged car at the IAA is the next important step on the road to our first race outing, which we plan to be the 24 Hours of Daytona in 2018. The FIA WEC and the IMSA series in North America are a top competitive environment for our new challenger. With the BMW M8 GTE, we are bringing cutting-edge technology to the top international class of GT racing, whilst at the same time tying in with our tradition at Le Mans. The development of the BMW M8 GTE is on schedule, and we can hardly wait to see the car challenging for victories in 2018.”

The new GTE challenger will be the racing version of the forthcoming BMW 8 Series coupe, which currently only exists as the BMW 8 Series Concept.  The car does not have a release date as of yet.  The M8 GTE will debut on track before the street car debuts.

The new M8 GTE will have a 4.0-liter twin-turbo V8 that will put out roughly 500 horsepower.  That will be mated to a six-speed sequential gearbox via paddle shifters.

The WEC effort will be a brand-new team for BMW.  The manufacturer has never competed full-time in the WEC and their last Le Mans appearance was in 2011.  The last two cars that have competed in the equivalent of today’s GT Le Mans class (the Z4 GTE and M6 GTLM) have been exclusive to North America.  In IMSA, the new M8 GTE will replace the M6 GTLM, a modified version of the M6 GT3.

In the GTE class worldwide, the new BMW M8 GTE will join existing challengers from Chevrolet (C7.R), Porsche (911 RSR) and Ford (GT).  In addition, a new Aston Martin has recently been seen testing in England.  That chassis will replace the current Vantage.