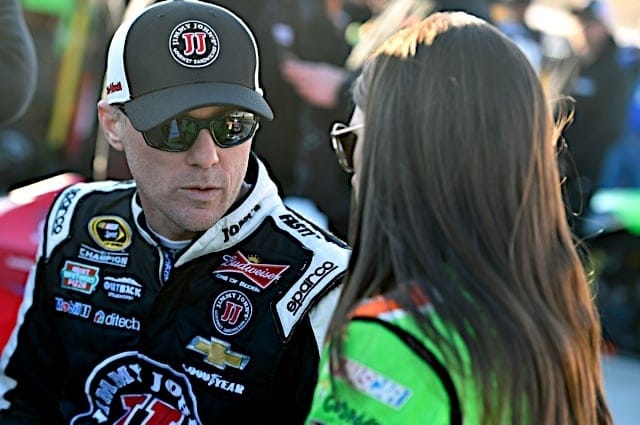 Another piece fell in the NASCAR Silly Season this week, as it was announced that Danica Patrick will not return to Stewart-Haas Racing for the 2018 Monster Energy NASCAR Cup Series.

For Kevin Harvick, teammate to Patrick at SHR since 2014, this was a big piece that fell into place, as the 35-year-old has shifted the sport to a new generation of fans since her debut in 2012.

“Danica has been a huge part of this sport and has turned a lot of people on to racing who may not have been before,” Harvick said. “The footprint she has brought is big.”

Harvick, who enters the 2017 playoffs with teammate and Daytona 500 winner Kurt Busch, Patrick, however, sits 28th in points with only one top-10 finish through 26 races. Through dipped performance, this is where her impact has taken the backseat, said Harvick.

“You have the performance side, which at some point, measures into everyone’s sponsorship,” he said. “I read the statement on Smithfield yesterday and it sounds like that’s why their leaving Richard Petty Motorsports — they want to run better on the track.

“I hope Danica gets a sponsor because she’s an important part of our sport. I read [team owner] Tony [Stewart’s] comments this morning. That transition from IndyCar to NASCAR, we’ve seen so many times people struggling.”

A transition is just what Harvick believes could help Patrick in 2018, making the comparison to Joey Logano, who left Joe Gibbs Racing for Team Penske in 2013 and became a championship contender.

“That’s what you hope for. That Danica can find a team and sponsor who fits her situation better than her’s now,” he said. “It’s not like anyone doesn’t get along [at SHR], the circumstances haven’t been 100 percent right to get the best performance needed.”

Patrick joins a long list of premier drivers on the market after the checkered flag at Homestead-Miami Speedway in November. Kasey Kahne, Matt Kenseth also have question marks while Dale Earnhardt Jr. approaches his final 10 races in Cup the next two months.

Despite the fast change of guard, Harvick knows what it’s like to fill in during a “catastrophic” time in the sport, taking over at Richard Childress Racing after the death of Dale Earnhardt in 2001.

“Being in the position I was, something was going to be catastrophic to the sport. It already was,” he said. “It went through a big transition. What did the Earnhardt fans do? What did that think about the sport? I don’t think this scenario is as big as that one, obviously.

“Sports in general have a way of absorbing everything and moving on. Whether it’s Dale Jr., Danica, myself. Things move, they shuffle and people come and go. As you look in the pipeline, there are young exciting drivers developing their own fans and skills and it’ll build back up.

“I think Danica is an important piece. It would be a plus if she was still racing cars on the weekends.”

And one day Harvick will be in the same situation. People do come and go.

Sometimes it takes longer than it should.

Yeah, but he was a winner

Bill B
Reply to  Tom R

…and she was a whiner.

which won’t make any difference when they say “we appreciate what you’ve done, but the sponsors want to make a change.”

Its just the way of the world, whether it be sports or business.

JOey at his time at JGR for 4 years at least had 2 wins, and poles, top 5’s and 10’s. How can this idiots Harvick even make that comparison. He killed it in Xfinity and did have flashes of brilliance in CUP at JGR. HE DID SHOW what HE COULD POSSIBLE DO, and EVENTUALLY DID!

AGAIN KEVIN, how and the hell can you compare HER TO HIM? Dammun that boy is stupid. He needs to have a statement written by Delana next time. Good flucking GOD!