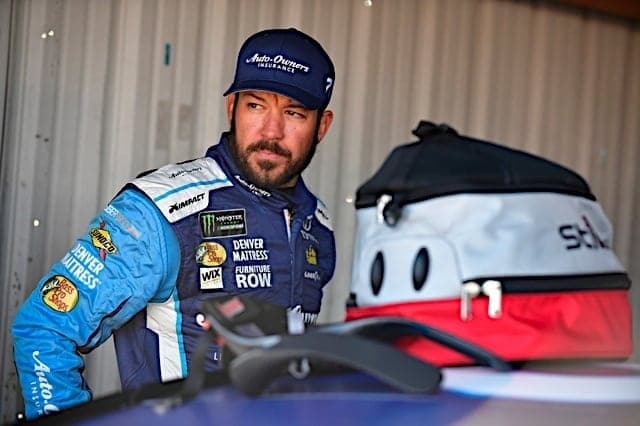 Though the Furniture Row Racing driver has had near-wins before, the circumstances stemming from an “unnecessary caution” that night prompted Truex to talk with Chief Racing Development Officer Steve O’Donnell to discuss the issue heading into the playoffs this weekend.

“For the most part this year, they’ve been consistent,” Truex said. “Jumping on every hot dog wrapper for a caution, that sort of thing we’ve seen in years past. Saturday night at Richmond was a departure from what we’ve seen the last five or six months. That’s really what I wanted to talk to Steve about, why did they throw the caution?”

Though the conversation was healthy, Truex wants to see more action in place of statements regarding officiating. The four-time race winner this year is concerned on the consistency of late-race yellows as the playoffs begin Sunday at Chicagoland Speedway.

“I heard what I wanted to hear. It did not change anything,” he said. “Don’t just tell me, show me. I’d like to see it play out the right way.

“The biggest problem I have is that every year during the driver’s meeting [NASCAR says] ‘Let is play out naturally, we don’t want anyone screwing with the race.’ And then they make the wrong call. It’s frustrating.”

Despite the crushing end to the regular season finale at Richmond, Truex foresees an even worse scenario if it happens again at Homestead, a similar event that took the championship from Carl Edwards in 2016.

“Dale Jr.’s tweet this week about Carl Edwards and his championship going away last year for a caution,” he said. “It’s hard not to think about it. If we’re in the same situation at Homestead, that would be really, really hard to take. They just have to be consistent and be sure to make the right call when the pressure’s on. That’s their job. Just make the right call at the right time.”

The conversation with O’Donnell expanded to talks about cars meeting minimum speed. Derrike Cope, who was 16 laps down at the time of the hit with the wall, joined what Truex feels is an issue in the series, especially with the dog-eat-dog nature in the playoffs.

“We should up the minimum speed on cars not in an accident who didn’t get on the five-minute crash clock for damage,” he said. “For that very reason. We don’t want to go to Homestead and have a car 25 laps down scrap the wall, blow a tire and change the outcome on the championship. For quite a while now, we have had cars here and there who are so far off the pace, you don’t know where they’re going to go into the corner. It’s not a huge issue, but it’s something we have to look at. And it is something they’re willing to look into. I think it makes sense.”

Even when the luck has been against them, the No. 78 FRR bunch have a 20-point advantage over second-place Kyle Larson, gaining the lead through 17 stage wins and four race wins. While he hopes NASCAR will let the races play out, he feels the speed is there to jump on any opportunity the next 10 weeks.

The last four laps of the last two races have been tough,” he said. “But, we have had a really strong season, I’d love to have an extra 10 pints on top of what we have. A few races have gotten away, but I think we’ll be OK. It won’t hurt our confidence how the last two have played out. We’re in good shape.”

Now why would anyone be concerned about consistency from Brain’s employees?

So, I guess the solution is to make it a REAL playoff and only have the cars contending for a title on the track, right? There’s your ‘game 7’ moment. Anyone want to watch?

But with only four cars on the track, the usual suspects can’t bring out any caution flags. How would Brian cope (so to speak)?

In other words, don’t be surprised if the 78 cars gets a pit road penalty at the most inopportune time for daring to question the officiating.

God these TOYOTA drivers are a whiny piece of work! Shut the fluck up already! You and your crew chiefs whine more than 5 year old girls. Marty is damn lucky NASCAR bends over backwards for him and COLE PEARS, ungrateful nasty POS’s. RG72 is correct…what the cheating on purpose games with officiating begin, taunting them!!!!!

Have you ever had a reply without all the CAPS? I think we can all get the point without it.

I really don’t know JJ…why don’t you go back to my posts and let me know how many times I use CAPS, and report back to me…run along now…BUH BYE!

Nothing new! All TOYOTA DRIVERS will make themselves “VICTIMS”, NO MATTER WHAT…and whine the whole time!

What is so weird to me is that MT Jr was such a nice guy when he wasn’t winning all the time. I really liked him as a driver and enjoyed watching his career from the start. Once he starts winning all the time he turned into the worlds biggest d-bag all of a sudden, big turn off I can imagine for his fans I guess…