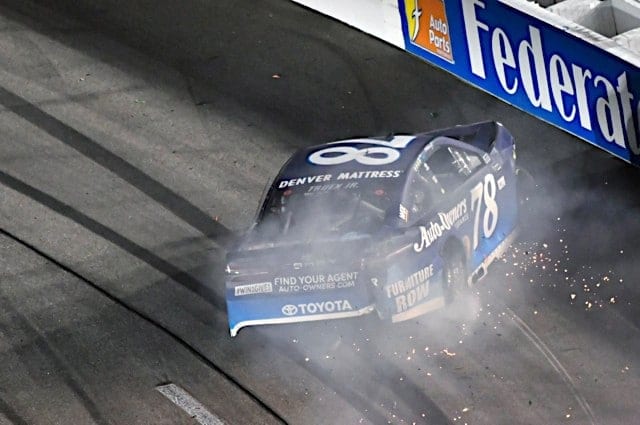 You made it, Martin Truex Jr.! You’re in the playoffs, are one of the two winningest drivers all season and already have a 20-point advantage before the playoffs even begin this Sunday at Chicagoland Speedway.

So why aren’t you the happiest driver in the sport?

While the No. 78 driver lacked a smile in the 16-driver playoff grid photo taken Saturday night at Richmond Raceway, it’s pretty clear why he isn’t as jolly as the numbers show.

Richmond was a brutal loss, one the New Jersey native has endured time and time again in his rollercoaster Monster Energy NASCAR Cup Series career. Going more than six years without a win from 2007 to 2013, having a dramatic fall-out with Michael Waltrip Racing and a troublesome first year with Furniture Row Racing afterward, even with a team and driver at their best in 2017, misfortune still has its place.

The late-race yellow at Richmond took what looked like a sure victory for Truex. Like it wasn’t tough enough, it came six days following a cut tire at Darlington Raceway that took that victory away in the final laps.

“The last four laps of the last two races sure have been tough,” Truex said during Playoff Media Day Wednesday at the NASCAR Hall of Fame.

Will this run of bad luck end once the postseason begins Sunday? As has been the case all year, speed is not an issue with the Toyota team, which has won 17 stages, four races and has led 1,646 laps in 26 weekends. With a career-high in top-five finishes (10 to a previous best of eight), it’s unusual to see Truex knocked down in consecutive races.

Could it just be that the racing gods are giving Truex a little smack of reality? Sure, but with four DNFs in the last 11 races and five finishes of 20th or worse in that span, you wonder how long that point advantage could carry him.

It’s likely that Truex will overcome these setbacks and spend more time in the playoff picture than in the garage, but many also said the same thing about Joey Logano, who missed the postseason all together.

With many interesting stories to follow in the 10 weeks to come, the guy with the target on his back may want to get back on track while the playoffs are young.

In the current era of the playoffs, it has been tough grounds for a non-playoffs driver to sneak in a race win. In fact, it’s been impossible.

Since 2014, if you missed the 10-race postseason, you were out of victory for the rest of the year. Whether it’s Talladega Superspeedway, Martinsville Speedway, flat track, intermediate, it’s been up to 16 guys going to Victory Lane for these last few years now.

Will this streak, dating back to Denny Hamlin at Homestead-Miami Speedway in 2013, end this year? As we’ve looked over the potential list of drivers capable of winning their way into the playoffs last weekend at Richmond, the same list of drivers come into mind for the final 10.

Erik Jones is an easy name to throw in there. The rookie had a shaky start to the year, with only one top 10 in the first 11 races, but made significant gains through the summer, nabbing another six top 10s by August.

And then Michigan International Speeddway happened, and since then Jones has been on fire, finishing third, second, fifth and sixth the last four races. In fact, his last non-top-10 result was the Brickyard 400 in July.

Can you say, “peaking too late?” It definitely seems that way, however the year is not done, and he has 10 more chances to grab a win with Furniture Row Racing before his moves to Joe Gibbs Racing in 2018.

The next is Clint Bowyer. This guy has been dubbed as the must-include driver pretty much all season with the team he’s on and the expectations and expertise on his back. But overall, the talk has seemed to stop there, with five top fives and no playoff spot to his name.

Congrats to the teams that made the playoffs. Goal hasn't changed. Have to win a race! We'll now do all we can to help teammates win Champ!

But don’t think it’s been a throwaway season. Leading the charge outside the playoffs in 17th in points, Bowyer has shown consistency this first year with Stewart-Haas Racing, compiling a 14.8 average finish, a number better than seven playoff drivers.

Logano is also another one of those guys. A popular championship pick this past winter, the No. 22 is shockingly out of the playoffs after an encumbered win and an unexpected floundering of a summer stretch saw him fail to make the postseason for the first time in his Team Penske career.

There was a lot of pressure for Logano to pull this off. And though it slipped through his fingers, the pressure is now lifted. The same can be said for Jones, Bowyer, Daniel Suarez, Dale Earnhardt Jr. and others who hope to end their respective years with one last cheer.

Who Will Make the XFINITY Series Playoffs in Chicago?

While the Cup Series starts its playoffs this weekend, two series still have to crown their contenders this weekend at Chicagoland Speedway, starting with the Camping World Truck Series on Friday and then the XFINITY Series on Saturday.

In terms of steps on the NASCAR ladder, the XFINITY race, where 12 drivers advance, will have a little more beef to it. One more level up and you’re at the top of the American racing world.

Approaching the series’ final regular season race, it’s Brendan Gaughan who occupies that final 12th spot. The Richard Childress Racing veteran hasn’t won since 2014 and has only two top fives in 25 races. This subpar season has put him 25 points to the good ahead of Dakoda Armstrong, who runs for a low-budget team at JGL Racing with the same amount of top-five finishes this season.

Outside of Armstrong, the points game is finished, as JJ Yeley is 65 points out in 14th spot. The rest of the points game is further up the playoff grid, with Michael Annett only one points ahead of Gaughan in 11th spot. His position of disappointment is even stronger than Gaughan’s, as Annett runs for a team populating the top three spots in driver points.

One more position up and you find Blake Koch, 51 points to the good. In this scenario of missing the postseason, Armstrong would have to have a darn good race, finishing at least top three in both the stages and final race result. Unlikely to happen.

But with Jeremy Clements pulling his win out of thin air at Road America, I guess you can’t count out anyone this time around.

Who Will Make the Truck Series Playoffs in Chicago?

And finally, the Truck Series. One more chance to secure your spot in what is only an eight-driver grid to Homestead. And it’s a toughie in comparison to XFINITY.

With six winners this season, it has only set up — at most — two drivers advancing on points. Chase Briscoe is locked in with a 75-point gap over ninth, which means we have only one position up for grabs Friday night.

And who other to hold that last spot than Ben Rhodes? The 20-year-old in his second season with Thorsport Racing started the season off calling 2017 his “real chance” to make it in NASCAR. He has backed up the statement by scoring five top-five and eight top-10 finishes, both career bests. He has also led 123 laps, not only the most of his career but also the most of any non-winner in 2017.

For the No. 27 team, it would be a tragedy to miss the playoffs, as a sure win at Kansas Speedway in May took away what would’ve been a lock into the playoffs.

But Rhodes isn’t the only one who has some near-wins this year fighting for that last playoff spot. Ryan Truex has made the most of his first full-time Truck Series season with Shigeaki Hattori, with five top fives this year. He sits only seven points behind Rhodes in what is the closest point battle of all three series for the final regular season event.

Behind Truex, it’s Grant Enfinger, another first-time full-timer will a shot at making it. The ARCA Racing Series champion once put together four straight top-five finishes in early summer before crashing out at Kentucky Speedway. Two finishes of 13th since then has put Enfinger 31 points back. An outside shot.

The final guy in the conversation is Noah Gragson, the Kyle Busch Motorsports driver who’s had moments of stellar hot-lap speed mixed with an occasional wreck out of a race. Three finishes worse than 24th — though seemingly insignificant — have put Gragson a whopping 47 points back of Rhodes.

It’s no tall task to ask for a win from any of these four drivers. Though a win isn’t necessary for a playoff spot, it’s sure to be a great show of four-for-one to kick off the weekend in Chicagoland.

Anyone starting a pool on whether the media will bother to cover any but the playoff participants?

MTJr better worry if he gets a chucklehead like Denny behind him again at Homestead. One “clown move” on the last lap could ruin a good season!