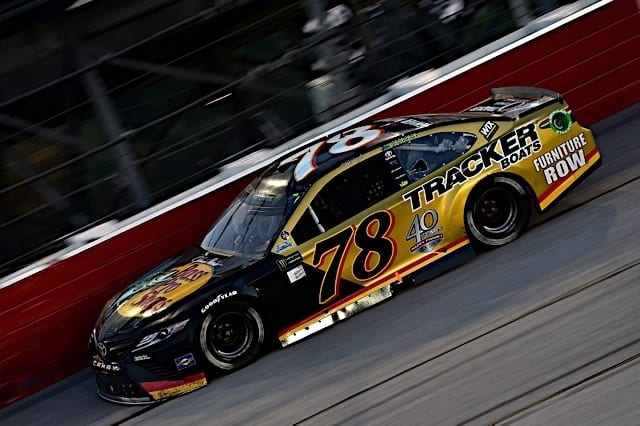 DraftKings’ daily fantasy NASCAR contest heads to Chicagoland Speedway this weekend for the Tales of the Turtles 400. This event marks the start of the ten-race Monster Energy NASCAR Cup Series playoffs. The green flag flies Sunday afternoon at 3 p.m. ET on NBCSN with 16 drivers eligible to compete for the title.

This week’s fantasy forecast is brought to you by DraftKings, the No. 1 platform for Daily Fantasy Sports. You can jump in on all of the daily fantasy NASCAR action at Chicagoland this weekend by signing up at this link for a free entry into one of this weekend’s contests. All you have to do is make a $5 deposit to get started!

After securing the regular season championship two weeks ago at Darlington, Truex looked like he was going to pile on even more playoff points with a win at Richmond. But with under five laps to go, while he was leading, the yellow came out when a lapped car brushed the wall. As a result, Truex lost the lead, and the race, in a bitter regular season finale.

Can Truex recapture his momentum? Remember, he took the checkered flag in last season’s playoff opener at Chicagoland. The Furniture Row Racing driver will also be the favorite again heading into Sunday as Truex has led laps in the past two races there. In addition to the win, he recorded 67 fastest laps, making him the top dominator candidate on DraftKings.

Busch added another top-10 finish at Richmond, bringing his season total to 15. He led a modest 38 laps, but took home the stage one win which scored him a crucial playoff point.

Busch is in prime position to get his postseason started on the right foot. He stands as the only driver to win from the pole at Chicagoland, doing so back in 2008. The Joe Gibbs Racing driver has an active streak of five straight top-10 finishes at the track, leading laps in four straight races there. In 2015, he also led the most laps with 121.

Busch has a comfortable point cushion to make it past round one, but expect him to run hard and make it a solid lock with a win.

Larson’s win at Richmond last weekend was his first career Cup win at a short track. He has dominated the two-mile ovals this season, but that victory showed he has the versatility to be a legitimate championship contender.

In his short career, Larson has enjoyed decent success in Chicagoland. In 2014, his rookie year, he finished third. He followed that up with a seventh-place finish in 2015. Last season was not as strong, though as he finished 18th.

Larson is 20 points behind Truex in the playoff standings, meaning he will need another good finish here to shrink the gap. Expect him to start the postseason sharp.

Richmond was nothing to write home about for Keselowski, but he did lead nine laps and finished 11th. It was a quiet, mostly problem-free race for him to finish out the regular season.

Looking ahead, Keselowski is one of only two active drivers with multiple wins at Chicagoland. He won his first race there in 2012, where he led 76 laps and his second came in 2014. Kes has finished inside the top 10 in six of his eight career Chicagoland starts; four of those were inside the top five.

The driver of the Blue Deuce should be a good pivot pick from the more expensive drivers after qualifying fifth. Don’t hesitate.

Kenseth was the car to beat at Richmond until the bizarre ambulance situation on pit road ended his race. Luckily, he had enough points to make the playoffs. It has been a fairly forgettable final season at Joe Gibbs Racing for Kenseth, though.

The 2003 Cup champion still has yet to win a race. However, he has finally started to pick things up over the past eight events. He has six top-10 finishes, four of them inside the top five. Other than the surprise DNF last weekend, momentum seems to be building.

Kenseth has one win in 16 races at Chicagoland. Through that span, he is averaging an 11th-place finish and has run inside the top 10 in four straight Chicagoland events.

Kenseth will need to continue that trend to slip past the first playoff round. Currently ranked 15th out of the 16 drivers in playoff points, he needs to race aggressively and finish strong. Expect the No. 20 to carry your DraftKings team towards the front.

Johnson has led the most laps of any driver at Chicagoland. His 695 laps led are more than 250 than second place. He is also tied with Tony Stewart for the most top-10 finishes at the track (10).

September is right about the time of year where Johnson runs his best races. He has become the master of NASCAR’s playoff system and you can never count him out. But since Hendrick Motorsports has struggled with speed, Johnson is priced lower than expected this week considering he has won seven championships.

Newman has been red hot as of late. He has four straight finishes of seventh or better, all while starting 13th or worse. That makes him one of the best mover picks on DraftKings all season, but he has remained within the bargain salary tier regardless.

Newman is in the running for a championship and is a consistent front-of-the-pack driver at Chicagoland, earning nine top-10 finishes in 15 career starts at the track. Expect more of the same to continue on Sunday.

It was officially announced this week Almirola will no longer pilot the No. 43 car next year. While his future is up in the air, primary sponsor Smithfield has struck a deal with Stewart-Haas Racing for 2018. That means Almirola is essentially driving for a job for the remainder of the season.

Almirola is priced incredibly cheap this week at a track where he has the capabilities to finish inside the top 20-25. He finished in 10th here two seasons ago, setting his Chicagoland career high. In five races, he has three finishes of 17th or better. That’s a trend you should expect to continue despite major distractions surrounding the Richard Petty Motorsports team. 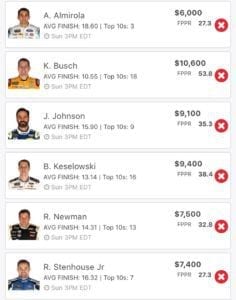