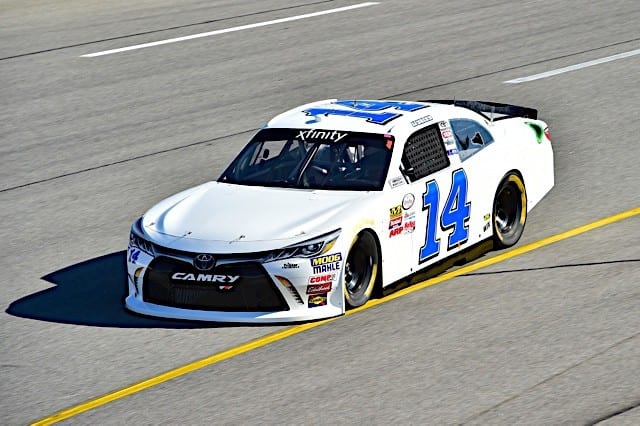 TriStar Motorsports has been racing in the XFINITY Series full-time since 2010, when they started with Jason Keller as the primary driver. In 2014, team owner, Mark Smith, ran a four-car operation, hoping to be the next big thing in the penultimate division of NASCAR.

Fast forward just three years later, and JJ Yeley is the lone driver remaining in the one-car stable. He hopped on board for the second race of the season at Atlanta Motor Speedway in 2016 and has been with the team ever since.

Heading into the regular season finale at Chicagoland Speedway, Yeley is in a do or die situation, sitting 14th on the playoff grid, 65 points behind Brendan Gaughan for the final playoff position. Whether or not the No. 14 team makes the playoffs doesn’t solely mean it’s been a wasted season.

“Realistically, the season was pretty good for us,” Yeley said of 2017. “We started off pretty slow. We put ourselves in contention to make the playoffs and realistically we were only about 10 points out going into Watkins Glen [International]. Unfortunately, that race we had an engine failure and finished 39th. From that point, it’s slowly gotten away from us and some of those points we’ve given up have been mistakes we shouldn’t have made.”

Heading into the Glen, Yeley was coming off a season-best finish of sixth at Iowa Speedway. That finish has been TriStar Motorsports’ only top-10 result through the opening 25 campaigns.

Yeley finished sixth in a paint scheme the team named Black Betty. The reason for the name? The No. 14 team has been run under limited funding this season after 2016 sponsor, Zachry, left the organization prior to Daytona. The Arizona native has been unsponsored in 11 races this year, including the past three events.

As with every team in NASCAR, money makes the world go around, but TriStar Motorsports is determined to overcome sponsorship woes.

“It makes it tough knowing with our team that there are a lot of races that we don’t have as many crew guys as some of the larger teams,” Yeley said. “We’re asking a lot more from our guys. I feel it’s important to keep the team morale up as much as possible and keep it light, try to have fun. These guys spend 60 hours a week at the shop and then come work their tails off at the racetrack.

“Obviously, I give everything I can when I’m behind the wheel of a racecar, but these guys have 14 hours a day. They have to want it as bad as I do, so we have to make sure that we keep it fun and exciting where it’s not too much of a job because it’s hard to get 100 percent out of people that way.”

Since the departure of Zachry, Superior Essex signed on for 13 races this season. Thus far the company has been on board for 10, leaving five of the final eight races open. Zachry is labeled as America’s pace-setter in turnkey construction, engineering, maintenance, turnaround and fabrication services in the power, energy, chemicals, manufacturing and industrial sectors.

“They purchased a couple large engineering companies and they really wanted to focus on internal business,” Yeley said. “I don’t know that they won’t ever come back to the sport. It was just a matter that they were so busy with internal issues and business that, that was their main focus. We’ll see what happens next year and years to come. We had a good relationship with them. I enjoyed having them at the racetrack and on the racecar.”

As with other large, full-time sponsors in NASCAR, Zachry is just another in a long list of companies that have dropped from the sport. Yeley was once sponsored fully by Interstate Batteries, and after he left Joe Gibbs Racing in 2007, they have become just a part-time for sponsor on Kyle Busch.

“The sponsorship has changed so dramatically because it’s not you like it has been in years past when you stuck a logo on a car and everyone was happy with that,” he said. “A lot of companies want a return on investment and a lot of business-to-business opportunities have been presented.”

Due to the limited funding, Yeley has seen himself take on another position at TriStar Motorsports in the marketing department. Being 40 years old, it’s been an adjustment period for the veteran driver.

“We’ve been changing our marketing strategies and the way we do things and that requires me to be a lot more hands on and that’s something I’ve never been a part of,” Yeley admitted. “It makes it interesting to see how our sport works from both sides of the fence.

“It’s been something that has been interesting and exciting to see. For me being a driver that is involved with a sponsor, it gives us the opportunity to give a lot more.”

As for the rest of the organization, sponsorship is what helps bring money to the employees’ table. Imagine running a big-time company on a limited budget. That’s what a lot of the XFINITY teams are trying to accomplish, and it’s easier said than done.

For some, it’s how they manage to deal with the funds that set them apart. Yeley and TriStar Motorsports realize the position they are in.

“The fact that we race on a fifth of the budget that some of the other teams do on the other side of the garage that are competitive every single week, it means a ton,” he said. “I think that’s what keeps these guys knowing is that we run so well with what we have. Obviously, we want to find the sponsorship and get the dollars we need to where we can make improvements, maybe do some R&D and so we can instantly get that next step up in competition. Then all of a sudden, you’re still a small, family-owned team, but have the ability to win races.”

While the XFINITY Series heads into its home stretch, Yeley is confident, as he picked up a pair of top-10 results during the final eight races of last season at Dover International Speedway and Kansas Speedway.