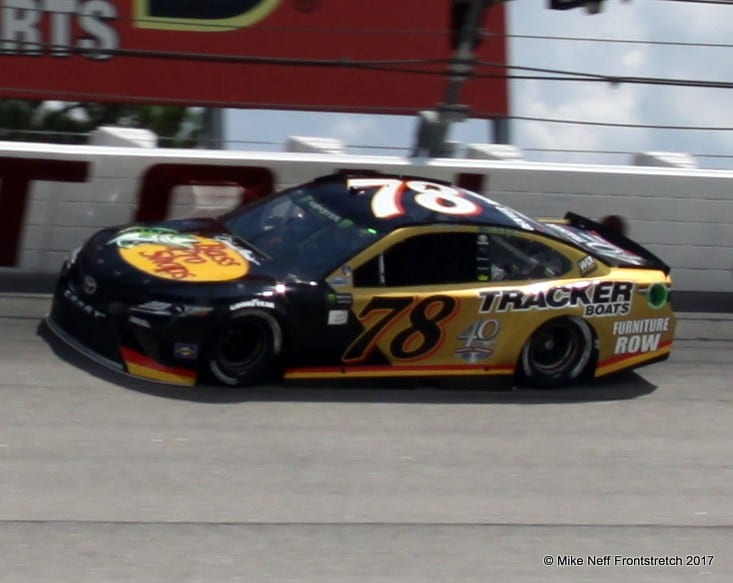 If you were looking for some late-season NASCAR drama, you got it dumped over your head in bucketfuls this week.

From ambulances gone awry to calling out the sanctioning body for the timing of caution flags to CEOs spouting off about the icon of icons in motorsports, it was the type of perpetuating storyline that would make the WWE blush. (Pardon the wrestling inference – I know that doesn’t fly well in these parts.)

Several years ago, the notion of phantom cautions became buzzwords for the issuance of a timely re-racking of the field, be it in the midst of consecutive green-flag pit stops or a stretched-out field at an intermediate track to help make things interesting. While the number of cautions in recent years has decreased dramatically, there is still the occasional yellow flag for a green Gatorade bottle on the apron or a car making inconsequential contact with the wall. Such was the case Saturday night at Richmond Raceway.

Martin Truex Jr., who was in position to win his fifth race of the year and add to his playoff bonus total, was felled by Derrike Cope brushing the wall (driving forward, in a straight line) with three laps to go. On the ensuing restart, Truex was spun by Denny Hamlin head on into the Turn 1 wall. Afterward he was justifiably upset with the caution, though his perspective was for a car that shouldn’t have been out there as slow as it was, not because of the innocuous wall rub. It may have been a bit of damage control on his part – why call out NASCAR on the eve of a playoffs that he’s handily in command of, courtesy of four wins and 18 stage wins during the regular season?

The NASCAR broadcast and print media were critical en masse of the race control decisions at Richmond and were not so subtle in their hope that something similar does not rear its head at Homestead-Miami Speedway to decide the championship. Even Dale Earnhardt Jr. chimed in with a tweet calling out last year’s controversial finish that saw Carl Edwards walk a mile back to the infield care center and abruptly retire a month later.

Part of the responsibility for last weekend’s loss rests on the shoulders of the pit crew, which surrendered the lead and lane choice to race winner Kyle Larson. It’s also the second time Truex has lost a race to Larson this year on a green-white-checkered restart due to getting beat by the Chip Ganassi Racing No. 42 team. While the No. 78 Furniture Row Racing team has dominated virtually every race this season, it has only four wins to show for it.

Think Kevin Harvick in 2014 and you’ll get a sense of how many times they should have won this season so far. The reaction and demeanor of Truex and crew chief Cole Pearn during the regular season championship trophy presentation spoke volumes of where they thought they should have been standing instead. I don’t want to make the international sign for the inability to swallow or breathe, but this is a team that has failed to seal the deal on several occasions this year. Then again, so have the Nos. 18 and 42 teams, the two cars that are likely the ones they’ll have to outrun by the time the final race at Homestead is decided.

Sponsors have been as much of a part of the plot of the 2017 season, as have the drivers, teams or rules changes. Nature’s Bakery started things off this year by freaking out on Danica Patrick after she showed up in an ad in a Tax Act driver’s suit, and then Subway served up a heaping helping of f-you to Daniel Suarez after he had the audacity to pass out some donuts during an pre-race sketch on NBC Sports Network.

Undeterred by the backlash each company received from the fans of the drivers those sponsors shunned, Smithfield Foods had a hold-my-beer moment on Tuesday where the CEO essentially called Richard Petty a liar and then scolded him for besmirching the good name of their bacon after providing funding for them the past five years.

Whoever runs the corporate communications at Smithfield Foods would do well next time to parse their words upon issuing a statement at 5:30 p.m. – in the midst of the daily NASCAR programs on Fox Sports Network, NBC Sports Network and Sirius XM – taking on the throne of the most beloved figure in the history of a sport full of fiercely loyal fans. Simply stating their decision to explore other opportunities within the sport – and including that there had been reorganizations within the company with regards to marketing – would have been the appropriate route to take. Instead, they decided to call the King a fraud.

Also, Smithfield’s explanation was contradictory at best, citing lack of performance for its decision to leave the No. 43 team. In short, the conversation would go something like this:

“Due to lack of performance, we are not returning to sponsor the No. 43 Ford.”

Where are you going, then?

“To the only car at Stewart-Haas Racing that has never won a race.”

It’s really a no-win situation for everyone involved, particularly this late in the season for Richard Petty Motorsports, despite being on the verge of naming one of the most popular drivers in the sport to take over the No. 43 seat. Smithfield, on the other hand, comes off as being either clueless or classless, when you couple its response and justification for abandoning the most hallowed of numbers in NASCAR lore.

With the assumed destination of Smithfield and Aric Almirola to the No. 10 team of Stewart Haas Racing, that ostensibly means the one left with no one to dance with is Patrick. It really shouldn’t come as a surprise. Having endured a season that saw virtually every promising run ruined by an incident not of her doing, you got the sense that after each successive hit, her enthusiasm and willingness to pursue a Cup career became less and less.

Coincidentally, it was the accident at Kansas Speedway when Joey Logano had a brake rotor explode that collected Patrick and Almirola that things started to fall apart. After a memorable TV interview where she had an on-air therapy session and then continued to bring up the accident weeks after, the writing was on the wall. A new clothing line as well as a winery appear to be her newest pursuits, and her comments of, “I’m at peace,” if she was unable to secure sponsorship or a new ride were harbingers of what was to come. Along with giving fans a tongue lashing outside the garage area at Pocono Raceway in July.

Patrick has been a polarizing personality for many. She helped shine light on a sport that needed some new life breathed into after it was struggling to rebound following the mid-millennium downturn of 2008-2011 and gave a generation of young impressionable female fans someone to look up to and with whom to identify. Did she set the world on fire statistically? No, but did she fare much worse than other open-wheel drivers that came south? And no, sprint cars don’t count, though she did last longer than Steve Kinser, and nobody would question his talent or commitment.

Danica Patrick and Steve Kinser in the same article? No, it just isn’t right. What are you smoking?

Man, leave Steve Kinser out of your pitifully written article. Try to write not showing bias and be objective.

I think that by the time that Daytona rolls around next year more than a couple of “names” will be missing. This is more and more reminiscent of a game of musical chairs. We will see how many people wont have a seat next year.

Remember when Sprint Car drivers were not look at favorably in NASCAR or INDY CAR? For years Poncho Carter was considered the last Sprint Car driver to make it in the big time. Somehow forgetting Jeff Gordon, Tony Stewart, Ryan Newman and Kasey Kahne’s background. All successful winners. And we all seen they couldn’t keep up with Steve Kinser in a Sprint Car. Now there are more Sprint Car drivers making it in NASCAR. Should we thank Cole Trickle and Days of Thunder?
Some of the NASCAR drivers never come close to winning week in and week out, but when the winning situation presents itself, they can drive the wheels off the race car. Note KK at Pocono this year and some past Talledega winners. They’re all pretty damn good!