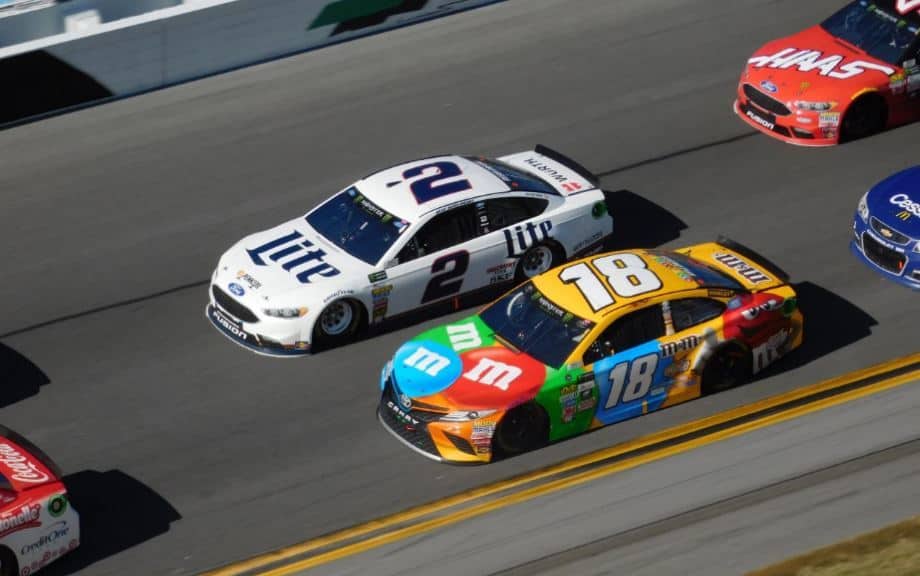 For a sport seeking some needed momentum, the internet became a wonderful place for NASCAR Friday.

Ahead of the playoff-opening race from Chicagoland Speedway this weekend, two of the sport’s biggest names (and bitter rivals) sparked the latest Twitter war in stock car racing.

Yes, of course I’m talking about Kyle Busch and Brad Keselowski. Who else?

The drama started when Keselowski commented on Toyota claiming the top four spots in the first practice session of the afternoon, calling it “a rude awakening.”

We are all in for a rude awakening.
Haven't seen NASCAR let a manufacturer get this far ahead since the 70s https://t.co/LttpCz9vJZ

Busch clapped back, prompting NASCAR Twitter to ensue into a frenzy.

Martin Truex Jr.’s crew chief, Cole Pearn, got in on the action next with a humorous tweet.

Other Toyota supporters then came out of the woodwork, including Busch’s teammate Denny Hamlin. While the Camrys have won six of the last nine races, there have been some slip-ups, including Hamlin’s Darlington victory that came attached to a 25-point NASCAR penalty for failing post-race inspection.

.@NASCAR is showing favoritism to @ToyotaRacing ?? when did this start? #encumbered. Concentrate on your own program bro.

But Keselowski wasn’t going down without a fight.

It's 2017. When you're about to lose an argument you call people names rather than face facts. https://t.co/IJnFiQOAXY

So why did the Team Penske driver speak out?

“Well, I mean, they’ve got a lot going for them right now,” Keselowski told NBCSN prior to his qualifying run at Chicagoland Speedway. “It’s not really fair of me to say where that is, that’s really more NASCAR’s and the team’s job, but it is still obvious. You can pretty much BS your way through it any way you want, it’s there. And we know we’re going to have to out-execute them, and we need a little bit of luck, because right now their cars have way more speed.”

Busch was also asked about the series of tweets between the two drivers, and didn’t quite understand why Keselowski felt the need to complain in the public eye.

“We watched those guys be fast at the beginning of the year, we’ve watched them be fast in years past, even when the Penske guys were with a different manufacturer, they won a championship,” Busch told NBCSN prior to putting his No. 18 Toyota on the pole for the Tale of the Turtles 400. “And we didn’t do our complaining on TV, we just did our complaining in the shop on Tuesdays when we went to work.”

“That’s where it’s all done, that’s what we’ve done,” Busch said. “I just gotta say how proud I am of our Toyota, TRD, teammates and guys and teams. Furniture Row Racing, Joe Gibbs Racing, TRD in Costa Mesa, the whole package is there. It takes a lot of hard work and dedication through a lot of great people. And all I feel like (Brad’s) doing right now is slapping his people across the face.”

Then, after winning the pole, Busch poked more fun at Keselowski.

“It’s because I’m in a Toyota, right?” he told NBCSN when asked about his pole-winning run.

.@KyleBusch was nearly three-tenths of a second faster than 2nd place, as Toyota goes 1-2-3 in qualifying. #NASCARPlayoffs #Rowdy18 pic.twitter.com/BnrLymxkOQ

Keselowski mentioned “NASCAR’s complete inaction to level the playing field, which is the precedent that has been set the last few years” following his fifth-place qualifying effort. However, the 2012 Cup Series champ claims he understands the ebbs and flows of manufacturer dominance in the sport.

“At the start of the year, we were at the top of the cycle,” Keselowski said. “And at this moment, we are not where we need to be. With respect to that, we were at the top and it seemed like there were a lot of rules changes us to slow us down and now you have cars that are so much faster than the field and there’s complete inaction by anybody. That is frustrating because parity is either good or it is bad. I don’t care either way. But when you are at the top, you like being at the top, everybody likes being at the top.”

Are Keselowski’s comments a bit of sour grapes? One would assume so. A few months back, he mentioned that the Toyota camp had a huge advantage and that they were running for “best in class” when it came to the blue ovals. Those comments came not long after teammate Joey Logano saw his win for Team Penske encumbered at Richmond. The No. 22 Ford never recovered while even Keselowski’s Ford has seemed to struggle with speed at times.

Busch is having none of it.

“Who cares, he’s an idiot anyways, we al know that […] if you ask Brad, he can fix the world’s problems, that’s all there is to it,” Busch said in the media center post-qualifying. “It’s just a fact of the matter that no one else is doing anything, they’re putting their head down and going to work and he thinks that somehow big brother is going to come up and help him.”

“I don’t know what the point is,” Busch continued. “We [at Toyota] all just work hard and do our jobs. We’ve gotten to where we are and we’re going to keep doing that. I wouldn’t think that all the speed we’ve got for the rest of the year is just here this weekend or the past six weekends.

The two drivers have run into each other on track countless times throughout their careers. Most recently, at Watkins Glen last month, contact between the two sent Busch spinning in the inner loop.

“I’m way behind in payback, just FYI,” Busch said. “So if anybody’s going to be getting it, it’s him.”

To think that given the huge amount of money in this sport, particularly with the heavy financial hand TOYOTA has put into the sport, the flagrant favoritism, and the changes made to a manufacturer when they were getting hot. NASCAR did not like what they saw, made them change and have been playing or trying to play catch up ever since. Rule changes at will, whenever! Never mind the expense to a team, etc.

Brads words at the very least do speak to a kernel of truth, and I am guessing they all know what is going on. Remember WWE under Brian! Brad often speaks the truth and is the bad guy, such as life these days.

I don’t always agree with Brad. I find his viewpoints on things to slant towards a very liberal leaning. I am however 100 percent certain if you matched IQ and wits with the lunk heads driving TOYS, and their crew chiefs, pretty sure Brad gets the MENSA membership.

Since nascar decided the front splitter had to be a completely straight piece of carbon fiber with no modificatiobs to the contour for atodynamics, it hurt the fords and chevrolet teams more than toyota. It was done bc jgr had not won a race in the first part of the year. Nascar is trying to give toyota a advantage for the time being bc they want other foreign auto manufacturers to enter the sport so nascar wants to help toyota be more competitive. Nascar even introduced a horsepower rule from 850 to 750 bc the toyotas wouldnt blow moterd trying to keep up. Im dure kyle didnt mention that fact.

Remember–in the beginning -it was NASCAR . . who physically HANDED Toyota -complete race ready, Chevy, Ford, and Dodge engines . . . so Toyota could “invent” a pushrod V8 that would be “legal” in NASACR –with only a basic stipulation – no measurements bigger than, or smaller than- the existing .
Here is DECADES and DECADES of research and development for Toyota to copy – just HANDED to them –by NASCAR !!
Not to say Toyota hasn’t done a great job improving on what was HANDED to them — intact–
Remember a few years back -they were SO far ahead — the Gibs teams placed THICK MAGNETS underneath the accelerator pedals on their cars that were checked at the track on the chassis dynos, so the pedal couldn’t go all the way down to the floor – exposing how MUCH of an advantage they had.
Since NASCAR is no longer run by anyone with actual RACING experience — the “games” continue as they now manipulate to put on a SHOW . . . instead of their original intent – simply managing the race procedures of a —competition.