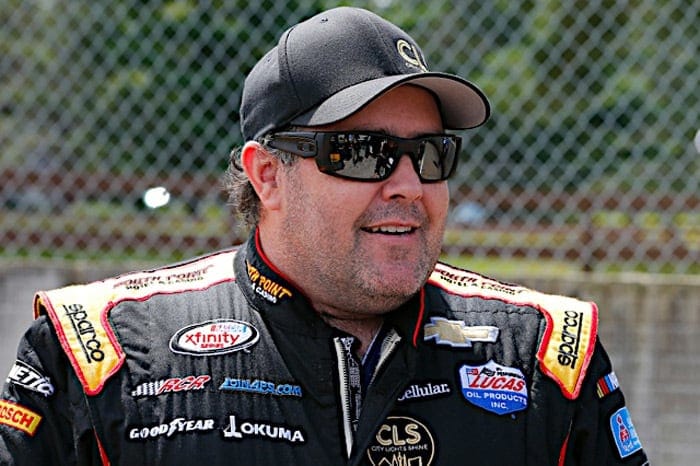 He entered the 2017 NASCAR XFINITY Series regular season finale 27 points ahead of Dakoda Armstrong for the 12th and final playoff spot. Take care of business, and they’d be in. Mess up, and they’d be out.

“If you look at our average running position, it’s way better than our finishing position,” Gaughan told Frontstretch before practice on Friday afternoon from Chicagoland. “We’ve just had a lot of things happen. Most of the time, if you’re in this position, you’re saying, ‘oh man, what do we need to do to get faster?’ This race team has not been all that slow. We’ve just had stuff happen.”

But the Las Vegas native wasn’t worried; he’s been in this rodeo a few times. The No. 62 was fifth quickest in first practice on Friday and 19th in final practice. The speed was, and has been, there. It was just a matter of putting all the pieces together.

“The positive is that we’ve been quick,” Gaughan continued. “Quicker than we are in points. So yes, it’s embarrassing to be sitting here at [Richard Childress Racing] talking about being on a bubble. We know we’re a much better race team than that. But at RCR we have fast racecars. That’s half the luck you need right there.”

But there wasn’t a ton of luck that went his way in qualifying — or speed, for that matter. They wound up 19th on the speed charts, failing to advance to the third round of time trials.

Gaughan wasn’t worried whatsoever, though. In fact, he embraced the challenge of starting mid-pack.

“The South Point Chevy is fine,” Gaughan told NBCSN post-qualifying. We’re way better than 19th. All we have to do is beat those two cars. All we have to do is be smart […] this is what we live for. We just got to keep an eye on Michael (Annett) and know what Dakoda is doing. For right now, we know we’re faster than we’ve been. I’m not worried about speed right now. We need to stay focused on where we need to be.”

And smart the No. 62 team was. It managed all race long. At the end of stage one, it fell one lap down to Erik Jones but earned the free pass and was back on the lead lap.

However, Stage 2 was when the collar began to get a little tighter. Gaughan developed a strange sensation in the car and began slowing dramatically, almost like he had a tire going down. He went multiple laps down throughout the course of the green flag run and was consistently two-to-three seconds slower than the leaders.

The team began formulating a plan and tried to diagnose the problem. It had pulled a packer out of the left front tire on the pit stop prior, but Gaughan didn’t think the ill-handling came from the splitter being on the racetrack. He was able to limp the car to the end of the stage without wrecking it and came to pit road to fix it.

It turned out that the tire was equalized. That occurs when the inner liner of a tire loses enough air pressure for that pressure to become the same as that within the outer tire, creating a vibration and an ill-handling racecar.

But in Stage 3, Gaughan was on regular pace again and more comfortable in the car. Toward the end of the race, when a caution came out and he had passed a handful of cars, he came over the radio and shouted, “Heck yeah, Shane Wilson! Way to not quit!”

When the 200-lap affair had conclued, Gaughan crossed the finish line in 13th, more than enough to ensure the playoff spot was his. After 26 hard-fought races, with some bad luck mixed in, the No. 62 South Point Chevrolet team was in the 2017 postseason.

“We went from three laps down back to the lead lap, and that’s very tough to do,” Gaughan said on pit road after clinching the final playoff spot. “The cautions came at the right time. Shane Wilson and I have always been willing to gamble. That’s the main thing that makes me and Shane so much fun: We’re not afraid to take the risks and gamble.

“And we did. We stayed out both times (under caution), and the cautions kept falling for us. That’s what you do: Keep digging, don’t stop. So proud of (the team) for not stopping, chasing down the problem, getting it fixed […] some days I look at myself and say, ‘wow, I’m an idiot.’ But sometimes it’s so fun to be an idiot.”

Gaughan didn’t panic when he was three laps down and felt like he was inches away from wrecking the car with his equalized tire. In fact, the playoffs never even crossed his mind. He was focused on the moment, trying to safely get his car to the finish in one piece.

“I was thinking to myself, ‘hold on,'” Gaughan said. “You only make that if you let that turn into a wreck. If I let that tire blow out and hit the wall or crash or do something really dumb, that’s worst-case scenario. And you cause it. So we slowed down, we lost some laps, that sucked. But we knew the positions we needed. We just needed to be smart and get to the finish line, and we did.”

Getting to the finish was pretty much all Gaughan needed to do, as Armstrong needed a miracle to get in. He failed to make the playoffs for the second year in a row.

Post-race, Gaughan was his normal, peppy, smiling self. Nothing had changed points-wise, but the performance of his team and the never-give-up attitude was what ultimately paid dividends.

“We’re in the playoffs, and we’re gonna make the run,” Gaughan said. “All the RCR cars have some new equipment coming down the pipe that Richard (Childress) and the guys have been working on […] we think we can make some noise now.”

He isn’t the championship favorite by any means, but that doesn’t mean they can’t win it. And as usual, Gaughan was high on himself, his race team as a whole and the momentum it’s gained as the playoffs get set to begin.

“I am who I am, and lacking confidence isn’t one of (my attributes),” Gaughan went on to say. “It just makes me happy for the teams to know we got that. And the boys at the shop that work so hard. They’ve worked so hard to earn this, so we’re gonna make them proud.”

If nothing else, this takes some proverbial weight off Gaughan’s shoulders. No more points racing, no more checking where the No. 28 is, no more playing defense. For the final seven races of the season, he gets to be a racecar driver who has one job in mind: win.

“I’m excited; now we can go back to race mode,” Gaughan said. “You saw what we can do at the end of the race when the handcuffs finally come off. The South Point Chevy is fast. Handcuffs are back off. Now we get to go play”.