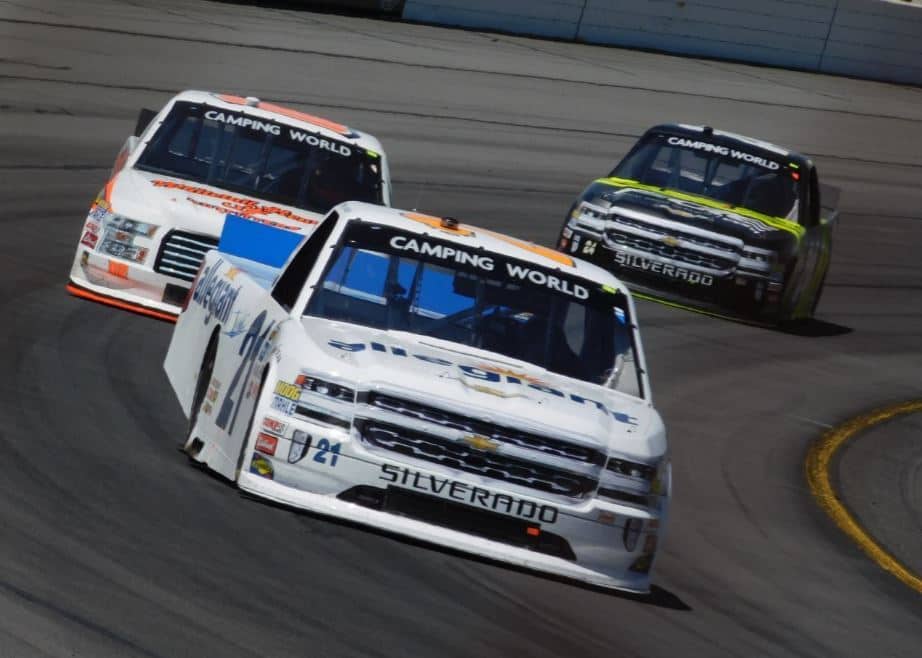 Christopher Bell dominated Friday night in Chicagoland but, in the end, just the slightest of wiggles handed the victory over to Johnny Sauter. The defending champion capitalized on Bell’s mistake in the end to secure his second victory of 2017. Chase Briscoe made strides toward the leader after passing Bell but would have to settle for second, tying his best career finish for the third time this season.

Bell wound up third while Ryan Truex and Grant Enfinger rounded out the top-five finishers. Truex, who entered the night outside the playoff picture tied with Ben Rhodes in the regular season standings. A second-place finish that Rhodes earned at Pocono earlier this year would prove to be the tiebreaker, sending the No. 27 to the playoffs and the No. 16 out of them.

Truex earned his first career pole earlier in the day and would lead the field to green alongside Briscoe. The first stage would be slowed by caution twice, once at lap two for Gray Gaulding and again with six laps left for Myatt Snider spinning on the backstretch.

A one-lap shootout would decide the ending of stage one with Truex, Sauter, Rhodes, John Hunter Nemechek, and Jordan Anderson staying out on older tires. Meanwhile, drivers like Bell and Crafton pitted for fresh rubber. When the green flag flew, Anderson would fall back, but Truex would keep his track position and ultimately win the first stage.

Truex and drivers who stayed during the final caution of stage one had to pit, handing the lead to Brad Keselowski Racing teammates Austin Cindric and Chase Briscoe. Briscoe got a push from Bell that sent him to the lead until Bell made the pass himself with 16 to go. From there, he’d simply sail off with the stage two victory.

Bell’s pit crew got the No. 4 off pit road ahead of Crafton and Cindric to set up the front row for the first restart of the final stage. Austin Cindric would make a risky move, making it three wide and he’d make contact with Matt Crafton. Crafton would have a tire going down and would begin to fall, almost collecting Ben Rhodes in the process.

Rhodes would have a slight tire rub that would eventually work itself out. Crafton’s situation would get worse and he would eventually spin coming off Turn 4. That put out an important caution for the leaders, giving them an opportunity to pit.

Justin Haley would stay out, hoping for a later caution that would never come. Chase Briscoe would take the lead with Ryan Truex in tow and it would stay that way until Sauter made the pass for the lead. From there, he’d never look back en route to his 15th career victory.