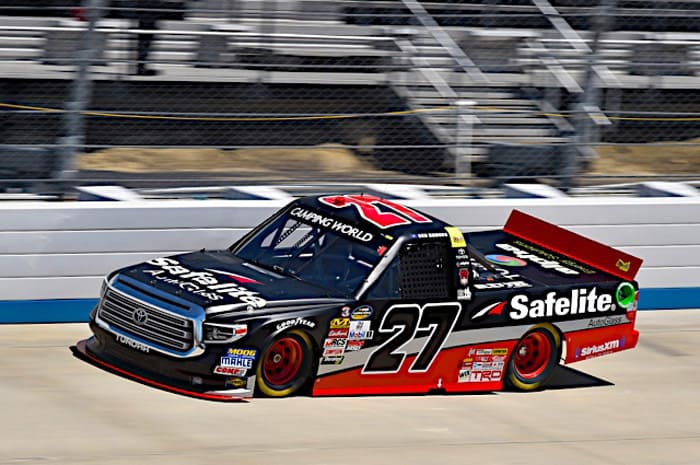 In a Nutshell: Johnny Sauter was the fastest truck on Friday evening, and he was rewarded for it. He led 28 laps on the evening in his No. 21 Chevrolet Silverado en route to his second victory of the 2017 season in the TheHouse.com 225 from Chicagoland Speedway. Ben Rhodes clinched the eighth and final playoff spot on a tiebreaker with Ryan Truex. Chase Briscoe followed Sauter across the finish line in second, with Christopher Bell, Truex and Grant Enfinger rounding out the top five. Rhodes came home in sixth, followed by John Hunter Nemechek, Noah Gragson, Kaz Grala and Myatt Snider.

Who Should Have Won: Sauter had the quickest truck throughout the entirety of the event. He led 28 laps on the evening, and they just happened to be the final 28. His truck came on strong toward the middle of stage two, and as most cars were falling back late in a run, he was the one that was coming on strong. Hit pit crew was stout all evening long, he wasn’t afraid to put the bumper to a truck or two and bullied his way to Victory Lane.

Rhodes gets in on Tiebreaker

The numbers will show Ben Rhodes and Ryan Truex being tied for the final playoff spot when the checkered flag flew. But by virtue of a tiebreaker, Rhodes is in, and Truex is out.

The tiebreaker goes back to the Pocono Raceway event earlier this season, where Rhodes finished second ahead of Truex in third by only a quarter of a second.

On lap 39, Rhodes’ No. 27 team was penalized for an uncontrolled tire during their pit stop and was sent to the back of the field. But Rhodes was a man on a mission and wound up making his way back up to the front. He gained enough spots to surpass Truex for the final playoff spot.

But then, on lap 108, he came back down pit road for a second time in as many laps due to the team not being able to repair damage that he suffered after making contact with Matt Crafton on a restart prior. One would think that would be the nail in the coffin for his playoff chances.

But it wasn’t. His sixth-place finish was good enough to barley put him into the postseason by the skin of his teeth.

“Man I still can’t believe it,” Rhodes said to FS1 on pit road post-race. “They gave me the hat and I was like ‘are you sure this is ours?’ They said we were tied and we got the tiebreaker. I can’t believe it. The truck all night, we struggled ever since we unloaded here. This has definitely been our worst performance overall, and it couldn’t have came at a worse week to do it, but I’m glad were in. And overall everything worked out for us. But a couple pit road penalties, it’s a truck that we struggled with all night.”

No better way to kick off the #NASCARPlayoffs for the defending champ. pic.twitter.com/7R8r6CjItz

Number of rookies in the race: Eight (8)

Number of rookies to finish in the top 10: Four (4); Chase Briscoe in second, Grant Enfinger in fifth, Noah Gragson in eighth and Kaz Grala in ninth.

Rookie of the Race: Chase Briscoe, No. 29 Ford F-150 for Brad Keselowski Racing

Points Update: The field has been dwindled down to eight, as the regular season has concluded and the playoffs are upon us. Bell is the leader over Sauter by 15, Nemechek and Crafton by 26, Briscoe by 31, Cindric and Rhodes by 33 and Grala by 35.

“I’m at a point in my career where, not to sound arrogant or ignorant, but you mess with the bull, you get the horns, so to speak. And I’m at a different point, you know. If someone wants to go toe to toe, I don’t care. Let’s go, that’s how I feel. And if Ben Rhodes wants a piece of it, let’s go.” – Johnny Sauter, race winner

“I’m just surprised that we’re here. Now we gotta re-focus and get a lot stronger for the playoffs because a lot of these guys have proven that they belong here. We got to get a little bit stronger because tonight was not one of our best nights.” – Ben Rhodes, sixth-place finisher

“I had a feeling it would come down to this, it’s been so close this whole year. And it’s tough because if you go back and look at times we’ve had things happen out of our control. If that wouldn’t have happened we wouldn’t be here, but a lot of guys can say that. So we’ll just keep plugging along. If we keep running top five like this, we’re eventually going to get a win.” – Ryan Truex, fourth-place finisher

Gave it my all on the track tonight.. still a lot to be proud of. We still have some races to try to win @Hattori_Racing @ToyotaRacing

Up Next: The NASCAR Camping World Truck Series heads to New Hampshire Motor Speedway for the UNOH 175, the first race of the NCWTS playoffs. Coverage for the event can be found on Saturday, September 23 at 1 p.m. ET on Fox Sports 1.