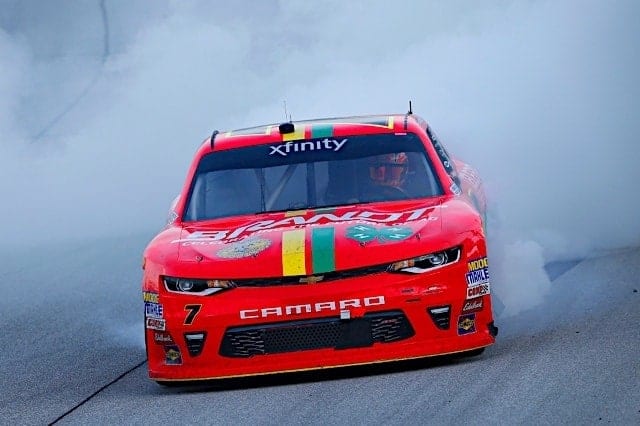 Until 15 laps to go, Saturday’s TheHouse.com 300 at Chicagoland Speedway in the NASCAR XFINITY Series looked to be on its way to being won by yet another Cup Series regular. But an eventful restart was a breakthrough moment for Illinois native Justin Allgaier.

Allgaier came out of the pits in fourth position but was moved to third by a Kyle Larson speeding penalty. The No. 7 car laid back on the restart, getting a massive run underneath Erik Jones, and took the lead halfway down the backstretch.

Another late-race caution came out with 12 laps to go, making Allgaier’s cruise to a victory a tad more difficult as Jones had the best car, the latter leading a race-high 94 laps. But after Jones suffered a restart violation on the resuming restart, the No. 7 team picked up its second victory of the season.

“This right here is all about this team,” Allgaier said. “I told you after practice I didn’t think we had the best car, but these guys persevered throughout the course of the day. Coming down to the end, I didn’t think we were going to have a shot and end up in the top five, maybe. We got great late-race restarts.”

Larson came back to finish runner-up after restarting 11th on the final restart. Elliott Sadler finished third and picked up some hardware by winning the regular season championship. Daniel Hemric and Austin Dillon rounded out the top five.

Cole Custer may not have finished where he ran for the first 180 laps of the race, but it was a career day for the 19-year-old.

Saturday started off well for Custer by being the highest XFINITY Series regular in qualifying, placing fifth. As soon as the race began, the No. 00 team shot up the scoring pylon, finishing third in the opening stage.

Stage 2 was dominated by Jones, but Custer was in close pursuit. The Stewart-Haas Racing team finished second, earning nine additional stage points. It wasn’t until Stage 3 when Custer showed what he had.

Custer restarted as the leader for the final stage as Jones received a speeding penalty during pit stops between stages. The No. 00 car paced the field for 41 circuits before having an epic duel with Larson for the top spot.

A few late-race restarts hurt the rookie driver. With 15 to go, Jones and Ryan Blaney got together in front of Custer, costing the No. 00 car valuable track position and also damaging the nose of the racecar. With another caution coming out just laps later for Ryan Reed, it allowed for the team to work on the banged-up machine and giving him a shot at gaining positions during the sprint to the finish. That’s what Custer did, finishing seventh.

“I was happy with that today,” Custer said. “That is the best speed we have had all year. It was really good. The four of us up front kind of gave it to the [No.] 7 car but that is how it is sometimes. I was happy with our run; I think we showed a lot of speed today.”

Going into the playoffs, Custer is seeded eighth with five playoff points.

On lap 29, three-time XFINITY winner William Byron lost all oil pressure and had to make an unscheduled pit stop. In the process, the No. 9 team lost 34 laps.

So, you’re a three-time winner in 2017 who’s not going to receive any additional playoff points — why come back out on the racetrack? Simple. Byron and crew chief David Elenz were preparing for the playoffs, specifically Homestead-Miami Speedway.

The worn-out surface at Chicagoland, yet to be touched since the track debuted in 2001, is similar to the asphalt at Homestead. Tires matter, and late in the run, it’s all about moving up the track to lay down good lap times.

Byron feels more prepared, even though he came home 33rd.

“We pretty much ran against the wall the whole race just to try and figure that out for Homestead,” Byron said. “It’s unfortunate. We broke a transmission early, and the guys worked hard to get it changed.”

Since picking up his third victory of the season at Indianapolis Motor Speedway, Byron has been hot and cold. Over the eight-race stretch since Indy, the No. 9 team has five top-10 finishes but has finished 22nd or worse in the other three races.

Byron will start the playoffs at Kentucky Speedway as the championship leader, picking up 25 playoff points in the opening 26 events of 2017.

A relatively tame Chicago race changed with 15 laps to go. Allgaier made an aggressive move for the lead, almost passing the front row in the grass. It also led to a melee between dominant drivers Jones and Blaney.

The caution was costly for Blaney as he got both front and rear damage and had to bring the No. 22 car to pit road. He finished four laps off the pace.

Jones still had a shot at picking up his second consecutive victory at the 1.5-mile track but received a restart violation when he made an evasive move by changing his lane before the finish line. The No. 20 car had little to show for a rather dominating performance.

It also cost Custer, who was among the top four positions throughout the entire race. But when the checkered flag flew, the No. 00 team finished ahead of those two companions.

Finishing 14th is nothing to get overly excited about. But Spencer Gallagher and his GMS Racing team absolutely needed a good finish on Saturday.

Coming into the event, Gallagher had nine consecutive finishes of 22nd or worse dating back to New Hampshire Motor Speedway in mid-July. Since then, the No. 23 team had varied between 19th and 22nd in the point standings.

However, heading into Chicago, Tyler Reddick had jumped ahead of the rookie driver, and he’s only competed in 14 events in 2017.

This is Gallagher’s best first top-15 finish since coming home 13th at Kentucky Speedway. It’s been a tale of two seasons for the start-up XFINITY organization, as it got off to a shaky start, though finishing in the top 20 in eight of the first 16 races. Since then, it’s been atrocious, but Gallagher’s 14th-place run is a good start.

Kyle Larson rebounded from an up-and-down day to be the highest finishing Cup Series regular in second. The No. 42 team received a pit road speeding penalty with 15 laps to go and managed to get all the way to second in the final laps.

Austin Dillon was the only other Cup driver in the top five. Younger brother Ty Dillon wound up eighth, while Erik Jones finished a disappointing 18th after dominating much of the race, leading the opening 92 laps. Daniel Suarez fought a vibration for the entirety of the final stage, coming home 19th.

Blaney finished a season-worst 26th after initially looking like he was on his way to his second triumph of the season. The caution with 15 laps to go may have cost the No. 22 team from going to Victory Lane for the second consecutive week and put an abrupt halt to Blaney’s 2.3 average finish he had coming into Chicago.

“The last few races have been kind of rough for us. We’ve had a lot of speed but didn’t finish it off good, but this weekend we kind of put it all together, showed the speed, would have had a really great finish.” – Cole Custer

“It stinks. We didn’t have a winning car at the beginning of the race, but then we had the car to be able to win at the end of the race.” – Ryan Blaney

The victory also marks the first time in his eight-year XFINITY career that Allgaier has had multiple wins in a season. Leading 15 laps improved his season total to 495, also a career-high.

The trio of JR Motorsports teammates — Allgaier, Byron and Sadler — look to be hitting their stride entering the playoffs, as for much of the season they have been the front three in the championship standings. It would be disappointing for any of those three should they not make it to Homestead in nine weeks.

The XFINITY Series heads to Kentucky Speedway next Saturday, Sept. 23 to kickoff its second annual playoff format. It will be the last standalone event of 2017, and Sadler is the defending winner, leading 11 laps. Kyle Busch won in the Bluegrass State in June but is ineligible to compete during the XFINITY playoffs.