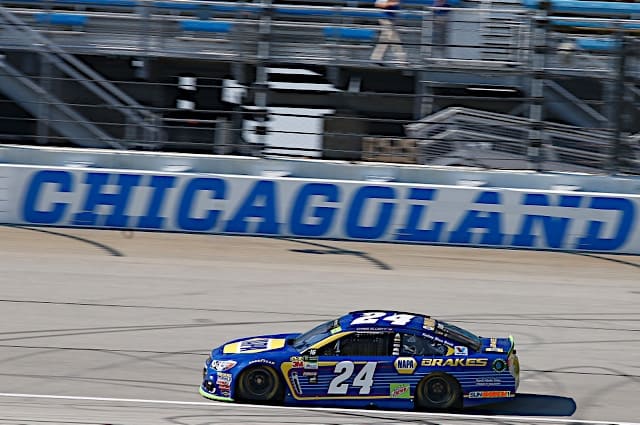 Chase Elliott still hasn’t claimed his first career Monster Energy NASCAR Cup Series victory, but a second-place run at Chicagoland Speedway in the Tale of the Turtles 400 is now a stepping stone to his ultimate goal.

“Pretty straightforward race,” Elliott said while leaning against his No. 24 NAPA Chevrolet. “A lot of times the best car doesn’t always win these races. One hiccup by Martin Truex Jr. or his team and we were going to be the next one. Frankly, those opportunities come pretty often. It’s not rare to see those opportunities open up. So I’m happy to see where we ran.”

Elliott led 42 laps one the afternoon, the first time he’s led over 10 laps in a race since the sixth event of the season at Martinsville Speedway. Team owner Rick Hendrick was pleased with seeing his bowties running up front and controlling the field.

What a pit road entry from @ChaseElliott! He makes up enough time to go #2the4ront! Can the 21-year-old get his first win? #NASCARPlayoffs pic.twitter.com/IrG40IQk1s

“That felt good, that really felt good. I forgot what it feels like,” Hendrick said with a chuckle on pit-road following the race. “Everybody’s working hard, we got some good tracks coming up for us. We really wanna get to Dover, New Hampshire, Texas, Charlotte, these 1.5-mile’s are good to us, good to Jimmie [Johnson] and good to Chase.

“But (I’m) really proud of this No. 24 team. They were flawless all day, that’s all you can ask for. You never know when someone else is going to make a mistake, speed on pit road or have a problem. We just got to be there, run like this and end up at Homestead.”

This was also the first top-five finish for the Dawsonville, Ga. native since Kentucky Speedway, where he finished third. It marks his 15th top 10 of the season and seventh top five. But more than anything, the No. 24 team was able to finish out a race and cross the finish line in a position they deserved.

“Yeah, it was a much better day than we’ve been having is the biggest thing,” Elliott said. “To me, I think we all needed it. We all needed the realization that if we do have the car driving right, if we do have the right pit stops on pit road, restarts go good, we can run with those guys.

“We didn’t have anything for Martin (Truex Jr.) today by any means, but I thought we made the most of what we had. I thought we were about better than everyone else, and to me that’s something to be proud of.”

The track record for Elliott and the No. 24 team at New Hampshire Motor Speedway and Dover International Speedway, where the last two races of this round are, are parallel to the top of the field. He has a best finish of 11th at The Magic Mile and has finished inside the top five in every race at Dover: third twice and fifth most recently.

Those statistics, coupled with one of their best runs of the season at Chicagoland, creates a nice sense of confidence for the remainder of the Round of 16 and heading into the Round of 12.

“This is the time of year. If you’re going to get hot or fix things or take steps in the right direction, now is certainly the time to do it,” Elliott said. “I’m glad we had the run we did today. Like I said, we needed that. And we haven’t been running to our potential each week. It’s always nice to show up and know that if the things driving right, pit stops are good, that you can run with them. And I think we proved to everyone else and ourselves that we can.”