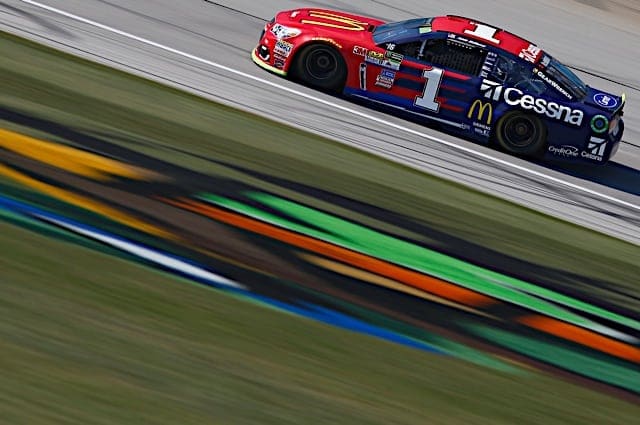 Jamie McMurray didn’t pull the “spin and win” feat, but he was able to salvage a day that at one point looked grim into another top-10 finish.

On lap 169 of 267, McMurray spun out on his own coming off Turn 2 at Chicagoland Speedway after getting loose, but was able to keep his No. 1 Chevrolet undamaged.

“I almost saved it,” McMurray said on pit road following his 14th top-10 finish of the season. “You get behind on the steering, and you can’t catch it. And then, I felt the tires blowing out and I was like, ‘I just hope I don’t hit the wall.’ And when I did hit the wall, I was just thankful that it didn’t tear a fender up while driving to the pits. So it was a good recovery from our team today.”

For most of the day, the Chip Ganassi Racing driver ran inside the top 10, around many of his playoff counterparts. But he wasn’t able to make much headway.

“It was actually pretty good,” McMurray said. “It seemed like the track favored the bottom, which I was shocked about. I thought we’d run the middle or the top because I didn’t practice. But there was a little but of running everywhere. I thought it was a little harder to pass than I expected.

“Even with the amount of tire falloff, it just seems like you get 10 car lengths in front of you, and the guy behind you was doing the same. It’s just a little harder to pass than normal. I feel like, typically, this is a good track to race on.”

In a 400-miler that saw seven of the 16 playoff contenders finish outside the top 10, staying consistent, just like they’ve done all season, will be the key for McMurray and the No. 1 team.

“Some of the (playoff) guys didn’t run very well today,” McMurray said. “So it think for us, you just go and try to do the same thing for the next two weeks. And then when they all reset again for the next round, you start over and evaluate who you’re racing.”

The Joplin, Mo. native finished 17th at New Hampshire Motor Speedway earlier this season and seventh at Dover International Speedway. But he has an average finish outside the top 15 at both tracks in his career.

“We’ve been so good at mile and a half’s, and theres a lot of those in the playoffs,” McMurray said. “The No. 42 actually ran exceptionally well at Loudon, so hopefully we can learn a little bit of what they had from the first race and run well next week as well.”