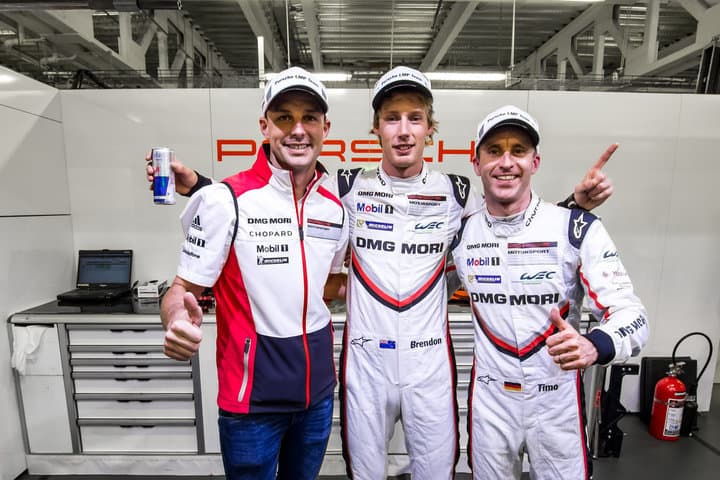 Saturday’s 6 Hours of Circuit of the Americas was a competitive affair.  The Toyotas, off the pace for much of the race weekend were able to take the fight to the Porsches.  However, the outcome of the race came down to team orders, as much as Porsche doesn’t want to admit it.  With less than 10 minutes to go, Nick Tandy pulled over on the pit straight and let teammate Earl Bamber past to take the overall victory.

Brendon Hartley admitted that Tandy pulled over for Bamber after the race.

“Honestly, it was an awesome race,” Hartley told WEC’s Louise Beckett prior to the podium ceremony.  “Toyota kept us honest the whole way.  The [No. 1] car played the rabbit.  They pushed hard the whole way.  Sad for them; they drove an awesome race [and] both cars could have won.  They let us by at the end for the championship, and there’s a high chance we’ll return the favor before the end of the year.”

It is the second time in three races that Porsche LMP Team has strategically placed the No. 2 of Bamber, Timo Bernhard and Hartley in front at the finish.  The reasoning is quite simply for championship purposes.  Porsche all but threw away Silverstone and Spa in order to focus on prep for Le Mans.  Despite unrealiability affecting the entire LMP1 class at Le Mans, the No. 2 Porsche came out victorious.  They are undefeated since.

The No. 1 Porsche of Neel Jani, Andre Lotterer and Tandy finished second in a form finish.  The No. 8 Toyota of Sébastien Buemi, Kazuki Nakajima and substitute Stéphane Sarrazin was third, 21.956 seconds back.

With their victory on Saturday, Bamber, Bernhard and Hartley have 159 points, good for a 51-point lead over Toyota’s No. 8 of Buemi and Nakajima (full-timer Anthony Davidson missed Austin for personal reasons).  That is more than two full races with three to go.  Simply maintaining their current lead would clinch the title at the next round.

In LMP2, Signatech Racing Matmut’s No. 36 Alpine A470-Gibson shared by Nicolas Lapierre, Gustavo Menezes and Andre Negrao dominated much of the action.  Jackie Chan DC Racing’s No. 37 and Valliante REBELLION’s entries were able to lead laps early on, but the No. 36 was able to stretch out their advantage late in the race.

In the closing minutes, Lapierre was leading by nearly a minute when Race Director Eduardo Freitas indicated that the team needed to repair a taillight on their next stop.  With 15 minutes to go, there wasn’t going to be another stop.  As a result, Lapierre had to pit with six laps to go to get the rear wing and light assembly replaced.  Despite the unscheduled stop, Lapierre easily held on to win.

Due to the positioning of the LMP1 Porsches, the No. 36 ended up a full lap ahead of the rest of the LMP2 contenders.  In reality, Lapierre was just over 30 seconds ahead of Valliante REBELLION’s No. 13 for Mathias Beche, David Heinemier Hansson and Nelson Piquet Jr.  Valliante REBELLION’s No. 31 for Julien Canal, Nicolas Prost and Bruno Senna was third, followed by Jackie Chan DC Racing’s No. 38 for Oliver Jarvis, Thomas Laurent and Ho-Pin Tung.

For much of the rest of the race, the two Ferraris traded the lead back and forth.  Late in the race, Calado’s teammate Alessandro Pier Guidi was leading by 35 seconds when he cut his left front tire.  The AF Corse crew did an excellent job to change the tire quickly and get Pier Guidi back on track at the time that Lapierre was getting his fix.  However, the stop cost him his entire lead.  That allowed Porsche GT Team’s Michael Christensen to get in on the battle.  However, the No. 7 Toyota of Kamui Kobayashi was coming through at the same time, effectively blocking a move by Christensen for the lead.

Once Pier Guidi got his new tire up to temperature, he was able to hold off Christensen’s charges to take his and Calado’s first win of the 2017 season.

Christensen and teammate Kevin Estre finished second, but were penalized 20 seconds after the race.  A new rule for the weekend mandated a minimum fueling time of 35 seconds for GTE cars.  The No. 92 Porsche team filled their fuel cell in 34 seconds on each stop on Saturday.  As a result, the margin of victory was more than 25 seconds at the finish.

AF Corse’s No. 71 Ferrari for Rigon and Sam Bird finished third in GTE-Pro, followed by Thiim and Marco Sørensen in the No. 95 Aston Martin.  The No. 97 Aston Martin of Jonny Adam, Daniel Serra and Darren Turner finished fifth.

Aston Martin Racing’s No. 98 dominated GTE-Am for the entire weekend leading into the race.  It took 40 minutes for the team to get in trouble.  First, Paul Dalla Lana lost the class lead early to Spirit of Race’s Francesco Castellacci.  A few laps later, Dalla Lana spun the tires exiting turn 11.  That allowed Clearwater Racing’s Keita Sawa to get a run on the Canadian veteran.  Sawa’s run took him right into the left rear of Dalla Lana’s Aston Martin, spinning out the No. 98.  The hit damaged the rear diffuser on the No. 98, resulting in extra time being spent to fix the car later on.

Sawa was able to get past Castellacci and take the class lead before the first round of stops.  From there, Clearwater Racing dominated much of the middle portion of the race.

The Clearwater Racing Ferrari for Matt Griffin, Mok and Sawa was second in class, 50 seconds back.  Spirit of Race’s Ferrari for Castellacci, Thomas Flohr and Miguel Molina ended up third, three laps down.

The results will see a change in the Endurance Trophy for GTE-Am Drivers standings as a result of the Dempsey-Proton Porsche dropping out late.  As a result, Aston Martin Racing’s No. 98 will take the points lead.

The race had only one safety car period, thrown right at the halfway point.  A few minutes early, Gulf Racing UK’s Michael Wainwright had a pretty terrible on track.  First, he spun out on his own in the Esses, sliding through a gravel trap before continuing.  Just a few turns later, Wainwright’s car appeared to break something and spun again at turn 11.  The 2015-spec Porsche 911 RSR slid through the runoff and backed into the Tec-Pro barrier.  Wainwright was able to resume on his own and drive back to the pits, but the safety car was called to repair the Tecpro Barrier.  Gulf Racing UK was forced to retire their No. 86 Porsche as a result of the crash.

FIA World Endurance Championship teams are off for the next couple of weeks before traveling to Japan for round No. 7, the 6 Hours of Fuji, on Oct. 14.  Coverage of the race will begin at 1 a.m. on FOX Sports 2.