We and our partners use cookies to Store and/or access information on a device. We and our partners use data for Personalised ads and content, ad and content measurement, audience insights and product development. An example of data being processed may be a unique identifier stored in a cookie. Some of our partners may process your data as a part of their legitimate business interest without asking for consent. To view the purposes they believe they have legitimate interest for, or to object to this data processing use the vendor list link below. The consent submitted will only be used for data processing originating from this website. If you would like to change your settings or withdraw consent at any time, the link to do so is in our privacy policy accessible from our home page. 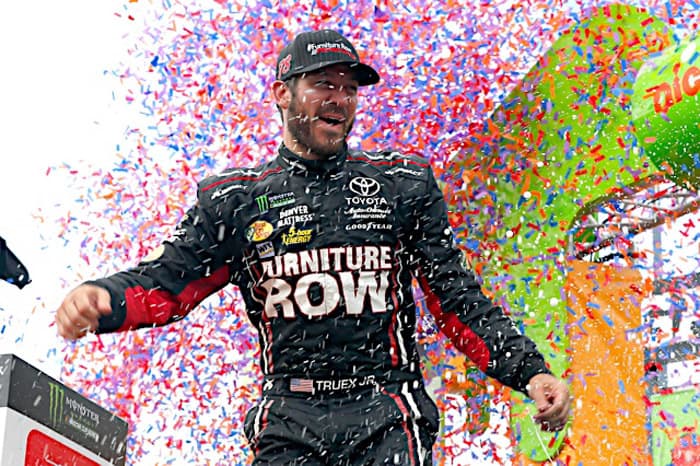 Chase Elliott led more than 10 laps for the first time since Martinsville Speedway in the spring, and it looked like his first win was coming in the first race of the 2017 playoffs. Unfortunately for the No. 24 team, Martin Truex Jr. was too fast to hold off.

Elliott was happy with the execution from his team throughout the weekend. Now, he thinks that if weekends like Chicagoland Speedway become a normality, competing for the title at Homestead-Miami Speedway isn’t out of the question.

“Yeah, it was a much better day than we’ve been having is the biggest thing,” Elliott said on pit-road following his second runner-up finish of the season and fourth of his career. “To me, I think we all needed it. We all needed the realization that if we do have the car driving right, if we do have the right pit stops on pit road, restarts go good, we can run with those guys.”

What … is the takeaway from this race?

Truex and the No. 78 team are the ones to beat, in case you had any second thoughts.

“I feel like when we first got together, we just clicked extremely well,” Truex said in the media center following his fifth victory of the season. “We have similar backgrounds. We have similar approaches. We’re very different people, but we complement each other well at the racetrack, communicate really well, have a lot of respect for each other.

“Chad Johnson sticks out in my mind as one of those guys, but we never had the support group around us to get to the next level. I feel like right now we just have everything. We have the right information coming in. We really just have it all going on for us right now, and things are clicking. We’re taking advantage of it.”

The No. 78 team sent a message to the other 15 playoff competitors on Sunday: they ain’t slowing down. With 53 playoff points, they could easily ride the wave, just coast from round-to-round and then turn it back on when they inevitably get to Homestead. But instead, they put yet another whoopin’ on the field, this time, coming from behind.

Oh, and by the way, this is their second win in a row at Chicagoland, the first driver to win back-to-back races at the 1.5-mile Joliet tri-oval since Kevin Harvick did it in 2001 and 2002. The question remains: can they keep it up? I’m not betting against them, and neither should you.

Where … was Kyle Busch?

After winning the opening stage and leading 85 of the first 87 laps, Rowdy’s day went to hell.

Kyle Busch lost the lead on a restart to Harvick and was maintaining the gap until he came over the radio to tell his team he had a loose wheel. He was forced to come to pit road under green to change four tires and rectify the problem. He was one lap down at the time. But things got worse.

Busch’s pit crew, which formerly served as teammate Daniel Suarez’ squad until Chicagoland, was penalized for jumping over the wall too soon. That penalty forced Busch to do a pass through penalty, putting him two laps down. He was never able to get back on the lead lap, as he wound up finishing in 15th, one lap down.

Not the day these two wanted. #Turtles400 pic.twitter.com/lMCeR7BqOZ

This weekend was Busch’s first rodeo with his new crew, and apparently some growing pains were needed before they can get to their ultimate goal of winning a championship.

In the grand scheme of things, though, this won’t hurt Busch. He has racked up enough playoff points to advance to the Round of 12 with relative ease, as he has a 35-point gap to the 13th-place cutoff heading to New Hampshire Motor Speedway, the middle race of the first round.

Why … did so many pit road penalties occur?

All in all, 16 infractions were handed out over the course of the 400-mile event from Chicagoland Speedway. Out of those 16, seven of them involved playoff competitors. Most of them occurred during the first round of green flag pit stops, three to be exact.

Ricky Stenhouse Jr. had a commitment line violation on lap 30, and also wound up earning himself another pass through penalty on lap 237 for speeding on pit road. He went on to finish 25th, the lowest of the 16 playoff contenders.

Truex was nabbed for speeding on lap 39 and was forced to work his way back to the front from the rear. But for the No. 78 team, it wasn’t anything they haven’t done before. And clearly, it made them stronger. Victory Lane is always a good remedy for an early speeding penalty, right?

To go along with the aforementioned Busch’s crew being over the wall too soon penalty, Austin Dillon was also penalized for speeding on pit road while entering on lap 40.

Was it nerves because it’s playoff time? Maybe. Was it just a rare coincidence that a handful of playoff contenders were penalized during the same stretch of pit stops? Maybe. But on thing is for sure: mistakes will cost you sooner rather than later. The good news? There’s still two races to go in the Round of 16 and nine races to go in the 2017 playoffs.

How … did Martin Truex Jr. win?

Plain and simple: he had the fastest car, and wouldn’t be denied.

He was bordering on falling out of the top 20 right after his pit road speeding penalty, but luckily for him, Kyle Busch had put more than half the field a lap down, so he didn’t have a ton of ground to make up.

But the ground that he did make up was hard to do so, and he made it look easy. Slow and methodical passes around countless playoff contenders, and before you could even bat an eye, there he was in the top five, then in second, then battling for the lead, and then taking the lead from Harvick on lap 213. From then on, he never relinquished the lead, and led all 55 circuits to the checkered flag.

On lap 201, Kurt Busch was penalized for speeding on pit road under green and was forced to do a pass through. He was running inside the top 10 at the time, but felt  a vibration he couldn’t ride out any longer. He wasn’t too thrilled with himself on the radio after the team, and was relegated to a 19th-place finish when it was all said and done.

Sorry fans. Not how we needed to start the playoffs. Vibration/speeding=coughing up 10pts. Had a top 10. No more room for error. #KB41 pic.twitter.com/eLfoWJkNzj

Going back to the rash of pit road penalties: that’s what’ll kill ya. He is now tied for the final playoff spot with Austin Dillon, a fellow driver who got penalized for speeding. But next weekend he returns to a track where he has three victories in New Hampshire Motor Speedway. He’d love nothing more than a fourth to vault him into the Round of 12.

If the 78 and 18 didn’t screw up on pit road they would have likely lapped the entire field
.Keselowski is on the right track pointing out Toyota’s superior speed because Nascar hates domination and wont tolerate it much longer. They will keep looking until they find out what grey area needs tweaking.
Notice how nervous Busch is made by kez’s comments

Ricky…..how did you like the 78 and 18’s tires going for a little swim, in the NASCAR “blue tent room” after one of the pit stops? Kind of interesting, wasn’t it?