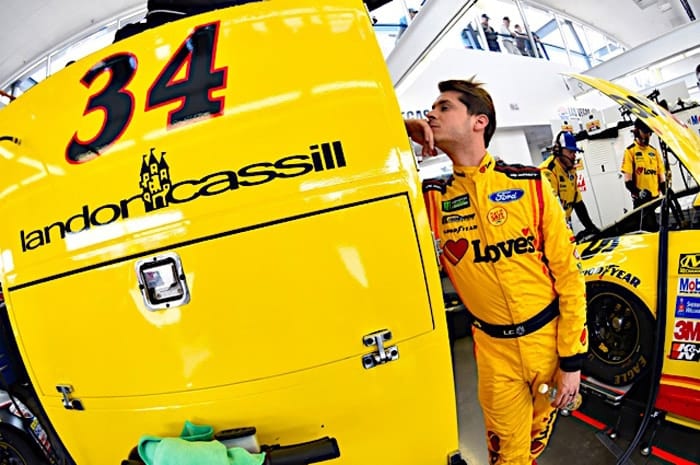 After last weekend’s race at Richmond Raceway, where Derrike Cope brought out a late caution while racing several laps down, fans and some media suggested Cope should have been removed from the track by NASCAR long before the incident. That group, which included regular season champion Martin Truex Jr., claimed Cope was so far in arrears he could no longer gain any positions by continuing.

It was a perspective that seemed harmless enough to many. After all, how dare a smaller team have an issue that affects the race?

The problem with parking Cope is that it’s not as simple as it seems on the surface.  Sponsors pay for whole races, not partial efforts, and they’re hard for small teams to acquire.  Like it or not, somebody gets a little TV time when an underfunded car gets lapped or causes an incident. All too often, in fact, it’s the only TV time they get during a race.  While nobody, from the driver to the team to the fans may like that, it’s also reality. Removing a company’s opportunity to showcase their logo, even for a few short seconds may make the difference in whether they’ll continue on supporting that program.

As it is, the five-minute crash clock already costs sponsors exposure by increasing the number of early retirees. NASCAR doesn’t need to give companies any more reasons to leave the sport; they’re in short enough supply already.

Also, it’s great to talk about this possibility when it’s Derrike Cope.  But what about when it’s not?  What about when it’s Kyle Busch or Dale Earnhardt Jr. or some other big-name driver who’s laps down from a five-minute crash repair or a mechanical issue (which doesn’t put teams on a clock)?  Want to hear fans complain?  Order their favorite driver off the track because he or she can’t make up any more positions.  Such a rule would have to apply to everyone, and someday, NASCAR would have to enforce it and leave the fans of that driver in an uproar.

At the end of the day, everyone who’s out there has made the race and followed the rules in place (there is a minimum speed, remember, so if the car was too slow it would be parked).  They deserve to get the best finish they can and the most exposure for their sponsor (which fans in the stands see every lap even if viewers at home don’t).  Sponsors pay teams to race as long as they are able, and teams are owed the opportunity to complete an event under normal circumstances.

And yes, even Cope, at age 58 and 27 years removed from his Daytona 500 win still has fans. They’re no less deserving of seeing him race than fans of any other driver.

NASCAR needs to leave this one be.

Top of the Class: Chicagoland

With the playoff pressure on, Ryan Blaney had one of his better runs of late with an 11th-place Chicagoland finish.  He’ll need to keep it up to survive this round; improvements will be needed to get past round two. But the No. 21 has needed to reach steadier ground, and Sunday’s race provided a starting point.

Sometimes, playing the strategy game can give a team a boost. That happened Sunday for Landon Cassill, who scored a top-20 result with a little pit strategy early and some skills to stay there.  Cassill is certainly capable of more finishes like this one, a nice recovery from two wrecks in the last three regular season races.

“Things went our way all day to complement a good race car,” he said Sunday. “We’ve had some things not go our way when we’ve had strong cars before, so it feels good to get a finish we know we’re capable of.”

It would be great for Front Row Motorsports to score a couple more good runs before the year is over. 2018 plans for the No. 34 are still undetermined as Cassill looks to finish the season strong.

The only other small-team driver to score a top 25 is Aric Almirola, earning a 24th-place result.  Almirola has not been confirmed in a ride for 2018, although rumors continue he’ll end up with Stewart-Haas Racing and longtime backer Smithfield Foods.

A passel of drivers from this group finished in the 25th to 30th-place range this week. AJ Allmendinger and teammate Chris Buescher finished 26th and 27th, so it’s safe to say JTG Daugherty Racing had pretty equal cars this week.  Both drivers are capable of more.

Ty Dillon finished a spot behind that duo in 28th, also a few spots below where his Germain Racing team can produce when things go right. David Ragan (29th) and Michael McDowell (30th) both barely made the cut, suffering through disappointing days after building momentum the past few weeks.  Problem is, there are so many teams capable of top-20 runs in this group that not everyone can get there.

No real surprises here, save perhaps Matt DiBenedetto (31st), who’s been strong enough all year that finishing outside the top 30 is a subpar run. That in itself should be considered a big improvement for the No. 32 team.  Reed Sorenson finished 32nd for Premium Motorsports, the better of those two cars as this week’s teammate, Gray Gaulding, came home 38th.

Jeffrey Earnhardt raced the No. 33 to a better result than a handful of his weekly competitors, and the team seemed satisfied with the result. Among those he beat was Cole Whitt, running 35th with TriStar Motorsports ahead of BK Racing teammates Corey Lajoie (36th) and Brett Moffitt (37th).  Timmy Hill (39th) and Ray Black Jr. (40th in his Cup debut for Rick Ware Racing) brought up the rear with underfunded and underpowered race cars.

Leavine Family Racing, currently fielding the No. 95 Ford, is considering adding a second team for 2018. Should they do so, Kasey Kahne is a possibility to slide behind the wheel.  The team has reportedly also talked to Kahne about replacing McDowell in the No. 95 if the move would bring in more sponsor dollars.

Richard Petty Motorsports is also continuing to court driver Bubba Wallace for the No. 43 in 2018 despite not having sponsorship or even shop space sewed up.

The small teams will get a crack at NASCAR’s new 2018 inspection station during playoff races this fall.  NASCAR is rolling out the new equipment, which will replace both template and laser stations, ten races early so teams have a chance to acclimate.  Playoff teams and likely their teammates won’t be subject to the new process, but others will (and that could lend an advantage). The new procedure uses cameras to check the body and skew of the cars and should make inspection more efficient.

Some cool news. Been trying to lay low but it didn't last long. Big thanks to @RickWareRacing. @MonsterEnergy cup debut is here!! pic.twitter.com/B67ANO3wcY

Was a uneventful day with the @LowTCenter @premiummotrspts car. Crew did great all day and weekend. We will keep digging

Not to worry, from all indications the track won’t be as crowded next year so everybody should have plenty of room.

If Brian loses cars like it appears he will, how does that affect his TV deal? He needs the cars to fill out the field and bring out the cautions he wants.

When you see what Farmers was paying for the #5 car per race you have to question how it continues. I can understand that advertising is expensive but if I were a stockholder I’d be asking questions at every meeting. When it came to light how many tax dollars were being spent for so little return the military had to get out.
Is it time to call this the death spiral?

Brian needs at least one or two of this type of non-competitive car out there just in the case the product needs to be spiced up at the end of an event. A couple of years ago, Ward Burton’s boy was reliable in this respect. Now it’s a rotating cast of characters.

OH I cringed when towards the end of a race “CAWSON”, I knew it was JEB, and I was right. Somebody I bet was paid well to take the “dive”.