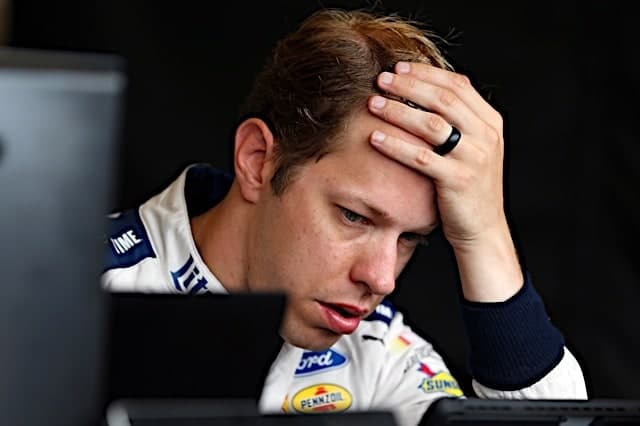 I’m sure by now you’ve seen the tweet from Brad Keselowski Friday, prior to the race at Chicagoland Speedway this past weekend where he took to Twitter to opine on the form of the Toyotas. Just in case, here’s the tweet in question:

We are all in for a rude awakening.
Haven't seen NASCAR let a manufacturer get this far ahead since the 70s https://t.co/LttpCz9vJZ

As you might expect, this social media missive ignited a firestorm of comments (shout out to Kyle Busch for saying exactly what he thought). It’s worth a quick scroll through the replies if you haven’t seen what people had to say.

What’s interesting about this controversy is that, once again, Keselowski is using Twitter to push an agenda. Right from his tweet from the car in the Daytona 500 (under red flag) a few years back, Keselowski has proved to be extremely adept at making the most out of the social media platform. Whilst his point likely won’t be addressed by the powers that be, just putting it out there into the NASCAR universe may have an effect.

Of course, the part Keselowski tries to make you forget is that for much of the first half of the season, Joe Gibbs Racing looked anything but fast. In fact, two of Keselowski’s own wins came in the year’s first six races. NASCAR is, and always has been, cyclical and right now the Toyotas are on top. It won’t last forever. With this format in particular, it also doesn’t mean a driver from the JGR stable will win the title – far from it.

Sunday’s 400-miler at Chicagoland Speedway marked the start of the 14th consecutive season of NASCAR playoffs. It seems much less, doesn’t it? (Or maybe much, much more if you really hate the format?)

So, just for fun, and since we have a good deal of data, I went back to look who won the first race and who ended up winning the overall title in each of the playoff years and to see if there was any overlap. It turns out that only three drivers who won the first race went on to win the big trophy at Homestead-Miami Speedway. Those three were Kurt Busch, in the inaugural season of the playoffs in 2004, Tony Stewart in 2011 – one of the five races he won in the final ten — and Brad Keselowski in 2012.

Can Truex become just the fourth driver to win the first race and win it all? Quite possibly. But it’s not a done deal just yet.

Sunday marked the conclusion to the 2017 Verizon IndyCar Series at beautiful Sonoma Raceway. When it was all said and done, it was Tennessee’s own Josef Newgarden who emerged victorious, picking up his first open-wheel championship and a 15th title for Roger Penske.

The 26-year-old became the first American to win the title since Ryan Hunter-Reay in 2012. In his first season driving for Team Penske, and in a nice act of numerical symmetry, it was Newgarden’s 100th race at the top echelon and crew chief Tim Cindric’s 100th IndyCar win.

Heading into the final race of the season, five drivers were still in contention for the championship. From the outset, through practice and qualification Newgarden and the rest of the Penske quartet of drivers looked lightning fast.

The race itself ran all 85 laps without a single caution and just as he did in the final race of the 2016 season it was Simon Pagenaud who took the checkered flag. Unfortunately for the Frenchman, it wasn’t a second straight title as he fell 13 markers shy of the big prize. In keeping with the millennial champion that he is, we’ll leave the last word here to Newgarden via Twitter (where else?)

It takes a team. Proud of our first year together @Team_Penske.#IndyCar | #CantStop | #2017Champs

FOUR: Next Up, New Hampshire

Next up in NASCAR, we head to New Hampshire Motor Speedway. It’s the second and final time in the 2017 Monster Energy NASCAR Cup Series season and the 46th time the sport will race there at the top level.

Sunday’s race will be – for now at least – the last playoff race for Loudon with the venue losing its second date and reverting to just one race next year for the first time since all the way back in 1996. The second event in the first three-race playoff segment will be something of a dash. It’s just 300 laps around the 1.058-mile track, so mistakes will be magnified especially for those 16 drivers in contention for the championship.

When the Cup circus last visited the track in mid-July, it was Hamlin who took the checkered flag for his first win of the season with eight of his fellow playoff drivers finishing inside the top 10. And it will be to no one’s great surprise that Truex led the most laps on the day (137) with Kyle Busch close behind (95).

Finally this week, Kasey Kahne has a new crew chief — Darian Grubb — for the final nine races of his Hendrick Motorsports career. Grubb is a familiar face in the Cup garage, having crew chiefed Stewart to his third championship in 2011 and also spending four seasons with Hamlin at Joe Gibbs Racing before returning to the organization at which he started his career.

“I’m looking forward to working with the team for the rest of the season,” said Grubb. “I enjoy competing in a playoffs environment, and we have tremendous resources at Hendrick Motorsports to pull from. I’m ready to get started this weekend.”

Whether or not he can help Kahne make some noise in this year’s playoffs remain to be seen. Realistically, that isn’t likely at this point considering the driver’s “lame duck” status. But neither party has anything to lose, always a dangerous combination in racing.

Kahne might just be one to watch over the next few weeks.