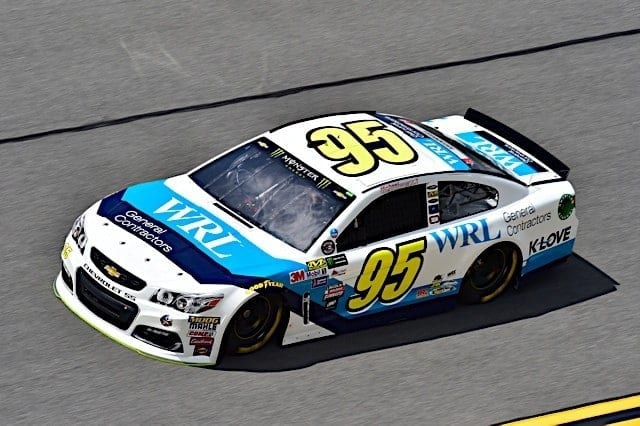 Did You Notice? … The powerful resume of Kasey Kahne? This year’s Brickyard 400 victory, combined with years of wooing major sponsorship, tipped the scales for single-car Leavine Family Racing. Despite a major leap forward with Michael McDowell this season, on-track potential wasn’t enough to keep the ride.

“We look at this as an opportunity for marketing, to be able to sell sponsorship,” said LFR owner Bob Leavine to Motorsport. “There is absolutely nothing that Michael (McDowell) did, it was just a matter of us having to make some changes to help us move up the ladder and be a factor in the playoffs.”

Kahne’s track record the last few years is spotty but his off-track persona? He’s still living off a brand built by old sponsor Allstate many years ago.

These commercials, made at the height of NASCAR’s popularity, appealed to women and were well-liked by all aspects of the fan base. By taking this gamble, Leavine is hoping the now 37-year-old Kahne “still has it” when it comes to being liked in the boardroom.

It very well may work out for them. But keep in mind Kahne’s car was the one at Hendrick Motorsports where sponsors are leaving, not increasing support. Farmers Insurance, Great Clips, and Time Warner Cable are just three major backers leaving the No. 5 car.

The man he’s replacing, Michael McDowell, hasn’t exactly drawn in sponsorship either. McDowell, winless in his career on the Cup level, may be younger (32) but spent years starting-and-parking before getting a chance. Beyond his faith, religious convictions that attracted the support of Christian-based K-LOVE Radio, he hasn’t had a full-time backer since 2008, his rookie year.

But McDowell is at least partially responsible for the growth of LFR over the course of 2017. A career-best 25th in the standings, he was fourth at Daytona and has just one DNF. The average finish of 21.6 bests Danica Patrick and is just a tick off Dale Earnhardt Jr. (21.2).

Of course, McDowell hasn’t led much — only six laps compared to Kahne’s 31. It’s Kahne who made the playoffs by virtue of his crown jewel upset at Indy. But check out the last seven races for each.

So since that Indy victory, McDowell has been outperforming Kahne in a car that often doesn’t have primary sponsorship. It makes Leavine’s argument this change was based on performance a bit harder to stomach.

Of course, the move to LFR likely means a partnership with greater Hendrick support. That engineering help and perhaps a connection to their marketing team is enough to understandably tip the scales. But let’s call a spade a spade, shall we?

NASCAR is a business, just like any sport. Unfortunately, on-track performance is more irrelevant than ever (see: Matt Kenseth) when the money isn’t there for it to make sense. I hope it works out for all parties (McDowell will be fine for 2018) but it’s a shame your brand is a better skill to have than your driving.

Did You Notice? … Martin Truex Jr.’s NASCAR season is shaping up to be one of the best in the sport’s playoff era? Sure, there’s still nine races left on the year. Truex could easily fail to finish the next two events and spiral out of the playoffs.

But assuming all goes as planned, he’ll be at Homestead on the verge of rubber-stamping an impressive season. Here’s a look at his stats to date.

These projections are based on simple math, dividing the season into quarters and mimicking his averages over the final nine races. If they hold, he’ll lead the most laps of any driver since Jeff Gordon in 2001. That’s the first year NASCAR expanded to 36 races in the modern era.

OK, you can read the chart. I think you know where this is going… let’s just say history is on Truex’s side should he make it to Homestead.

Did You Notice? … Chase Elliott was docked 15 points for improper modifications of his rear spoiler during the race? The L1 penalty also cost crew chief Alan Gustafson $25,000 and a one-race suspension. The car chief, Joshua Kirk, is also suspended.

Hendrick has depth so a capable head wrench, Kenny Francis, will be on top of the pit box to fill in. But the move puts an asterisk on the sudden speed the No. 24 showed at Chicagoland. Prior to Sunday, the sophomore hadn’t led a lap on an intermediate since Fontana all the way back in March.

Moving forward, Elliott was a respectable 11th at Loudon back in July. The next weekend at Dover, he’ll likely benefit from Johnson’s bulletproof setup there. That means it should be easy for him (still 18 points above the cutline) to make it into the next round.

Does that mean this move was a slap on the wrist? Well, yes and no. Without the infraction, Elliott would still likely have had a top-10 finish. His teammates were hanging around the back half of the top 10 all day.

But any penalty, no matter how small looks ugly for NASCAR and the playoff driver in question. The fact we’re one race in and one of the 16 competitors was caught cheating? It’s not a good look, for either Hendrick or the sport.

Oh dear God, just no…no. Regarding the Kahne segment. I ain’t even chargin’. Free advice from a woman! Just no!

My comment did not show up! But I am with ya!

If your comment doesn’t show up refresh the screen with F5. It’s happened to me too.

What has Nascar come to?…..Business and Monkey Business

Take Kahne for free or pay McDowell’s salary. Seems like an easy choice for any owner, let alone one with middle of the pack money.

-Nascar has no one to blame but themselves for letting the sponsors run the sport. It used to be about driver talent getting rides, now its just young kids with money getting Cup rides even if they aren’t ready. And people wonder why the veterans are typically those running up front most of the time (with a few exceptions). They are taking advantage of the lack of talent in the series and is another reason no new fans are being attracted to the sport.

-Truex can’t be eliminated in the first round since he won at Chicago, but I get your point.

-You assume that none of the other Hendrick cars were tricked up during the race. Elliot got caught but was he the only Hendrick car that got inspected after the race? 15 points was not nearly enough of a penalty. Anyone caught with an illegal car in the playoffs should be eliminated, plain and simple.

Kahne will bring Hendrick cars etc. for 2019 after the Childress deal expires. This was set up by Hendrick to get Levine’s business in 2019. Kahne had to be part of the deal struck by Hendrick. If Kahne could not be competitive with all the resources of HMS why would anyone expect him to be anything but a backmarker with Levine. Politics rears its ugly head again with Hendrick running the show.