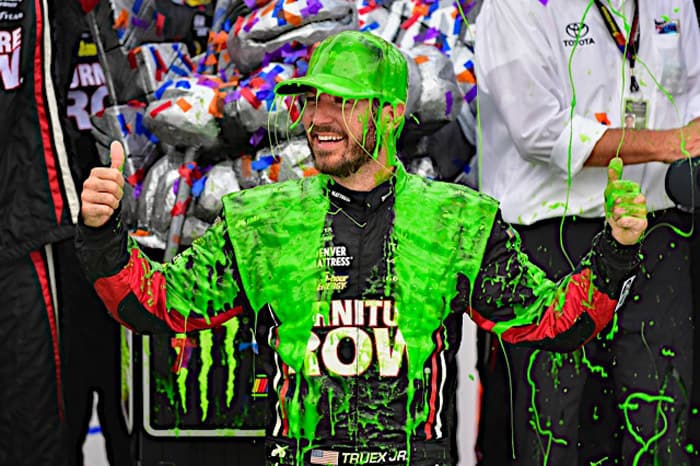 This weekend kicked off the Monster Energy NASCAR Cup Series playoffs at Chicagoland Speedway. 16 drivers began their pursuit of the biggest prize in stock car racing. One driver is chasing his record setting eighth crown. Five more are after title number two. The other 10 are seeking to add a cup championship to their resumes. Winning round one would ensure that they would keep that dream alive at least into round two.

Funny thing is, the only driver who didn’t need a win to guarantee his place in the next round ended up taking the checkered. Regular season champion and playoff point hoarder Martin Truex Jr overcame a pit road miscue to claim his fifth win of the year. Even being doused with slime couldn’t erase the smile on his face. It was certainly a far cry from his less than amused post-race expression following last week’s race in Richmond.

One can only imagine how long it took Truex to remove all of the goo that was dumped on him in Victory Lane. Fortunately, our contributors were spared from a bath of green ooze. Besides, they’re slippery enough already. So did we put together a slick group of 10 after Chicagoland? Or did we just end up making a slimy mess? You decide.