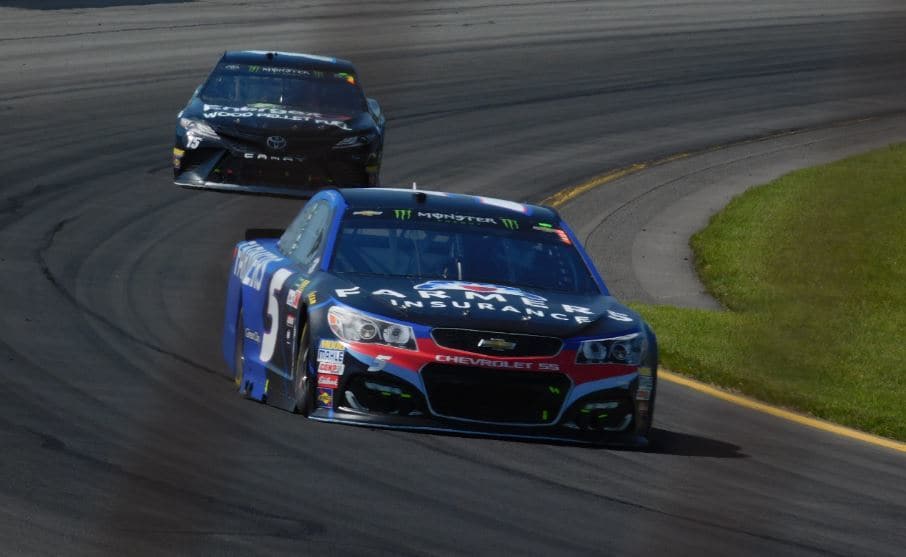 If you live in the Northeast, you already know the impact Ted Christopher had on racing. If you don’t, you might be wondering what the big deal was.  Christopher was a racer, plain and simple. If you want to know what people mean when they say a driver is a “real racer,” he was the epitome of that.  He raced – and won – in just about anything. It wasn’t uncommon to go to a NASCAR weekend at Loudon and have Christopher contend for wins in a Modified and a K&N East race and then, for good measure, in an XFINITY Series race. One weekend in 1999, Christopher finished in the top 12 in all three series.

But TC was a short track racer, and most of his legacy was built there. His NASCAR achievements include the 2008 Modified Tour title, a 15-year streak of top-10 points finishes in that series, 42 career Modified wins, 10 K&N East wins and six Southern Modified Tour Wins. But that’s just the tip of the iceberg.

You loved TC or you hated him… there was little middle ground. He had a three-hit policy: one shot to the bumper meant he was there, two meant you might want to give him the lane, and three meant he was taking the lane by force.  Letting it get to three was probably a bad idea.

That’s not to say Christopher didn’t try to pass clean. He certainly did and he could pass like quicksilver, but he wouldn’t apologize for using the front of his car as a means to earn a position either.

I wasn’t lucky enough to see Richie Evans or Jerry Cook race in person, but I did get to see Christopher and Mike Stefanik at their best, and it was some of the best racing I’ve seen.

There was talk last week about whether Danica Patrick belongs in the NASCAR Hall of Fame, but Christopher is who we really should be talking about for that slot.

Silly Season 2017 has been a long one, beginning with rumblings in the spring, building through the long, hot summer, and still hitting the headlines even as the playoffs take center stage.  The closing of the No. 77 and sale of its charter – I’d bet to Team Penske, but there are others in the mix – closes one door, and Kasey Kahne’s signing at Leavine Family Racing fills a seat that wasn’t really quite empty, leaving Michael McDowell a possibility for any team considering a change.

There’s still the No. 10 to officially fill (probably with Aric Almirola), the fate of Richard Petty Motorsports and BK Racing, and then postseason crew changes, so this is really just getting good. Stay tuned, but strap in, because there’s still some silly left.

3. Thanks… now here’s your replacement

For the second year in a row, though, Silly Season has seen a team drop a driver who was there for the start and the growing pains like a hot potato once someone with more money came along. Yes, money drives the sport when all is said and done, but it just feels wrong to kick a driver to the curb just when things are looking up for a team that he’s largely responsible for bringing to that point.

Last season, McDowell had to share the seat with Ty Dillon, who then took over the seat of the No. 13 from Casey Mears. Like McDowell, Mears brought that team along only to be replaced by Dillon when money and performance came together

McDowell did everything right this season and the No. 95 team improved by leaps and bounds.  Good enough, it turns out, to attract Kahne.

In actuality, McDowell did everything right except be Kahne. The latter will bring more money because he’s popular, but while he did make the playoffs this year, here’s less popular reality: Kahne’s 2017 is just one position better than McDowell’s, and in 27 races, Kahne has finished ahead of McDowell just 15 times. Take away that Indy win, and you wind up with two pretty equal drivers, one of whom brought the team to the point where it could sign Kahne, the other who’s posting only marginally better numbers despite having much better equipment.

Brad Keselowski’s remarks about Toyota having a marked advantage may or may not be true. I suspect to the average fan, whether or not you think Keselowski is full of hot air or onto something, is directly proportional to how you feel about the Toyotas or their drivers right now. However, the manufacturer’s dominance brings back shades of the late 1990s when teams complained constantly about others’ advantages, got a concession, and then the other teams complained incessantly about the advantage they just got.

To a degree, questioning what makes others tick keeps the sport on an even keel as long as NASCAR polices accordingly. When it gets to be a problem is when people jump on the bandwagon that “this and that need changes” and “so-and-so is cheating” and NASCAR responds by tightening the rules too much.  The Car of Tomorrow (and thankfully now of yesterday) was in part a response to the cries of “no fair” from competitors and fans. So, it’s a delicate balance of hue and cry and going overboard as a result or making quietly sure there is no real advantage. NASCAR does need to be on that.

If there is an advantage, it needs to be phased out. It is important for many reasons to keep things level. But getting too bent out of shape serves nobody in the end.

I’ll have to admit, though, the Twitter war between Keselowski and Kyle Busch was pretty funny.

5. Hey, champ, can I have your autograph?

The Verizon IndyCar Series wrapped up 2017 this past weekend with an incredibly tight championship battle, by the way, despite not having any playoff system. Huh.

One thing that stood out was that, just like every week, every driver was available to fans for autographs.  Every driver. IndyCar might not draw the crowds that NASCAR does, but NASCAR and its stars need to do better when it comes to finding ways to be more accessible. Q&A sessions to huge crowds and no autographs after seems weak, and surely each driver could spare an hour at some point.

If NASCAR is going to continue to condense race weekends, there’s even less reason not to have everyone out there at some point. IndyCar has had that one right all along. Along with their title battles.

This sport seems to have drifted heavily into the “entertainment” sphere why is so hard to believe that strange things are afoot at the Circle K? Drivers know what is going on, we don’t. I don’t think Brad is wrong. And when you see the heavy favoritism by NASCAR regarding anything Toyota and their heavy pouring of dollars into Brian’s pocket…you would be a fool NOT to question. IMO. And if a driver is saying it out loud, he would not say it just to say it, I believe. Too much at stake to do so.

You said it kb. The part that burns me up is people saying this and that and you are making something about nothing, etc. but I am basing it on what I am seeing week to week, not on who my favorite driver or car is. They want to say its the driver – if that’s the case it sure took MT Jr a LONG time to get his crap together! From what I am seeing week to week, unless there is a crash or mechanical failure, look for a Toyota to take the checkers – something is not right…

Yes…good points! Marty Truex has been around for over 14 years..with zero success until last year! He won 4 races and this year 5 so far! What, did the old man suddenly have a come to Jesus moment and all of a sudden improved? He until last year had one of the worst records for a long time as an active driver. The whole thing is absurd! Over 14 years with a win or two..then a drought like no other! He is damn lucky he is still around, damn lucky. Something is rotten in Denmark! Now he is among “the best”. Give me a break.

Unfortunately the claims of manufacturer advantages is part of auto racing and has been forever. For me, it makes more sense for those claims to come from a crew chief along with specific reasons why the advantage exists, but when a reporter sticks a microphone in front of a driver, especially drivers like Keselowski and Busch, and asks them why they didn’t win a race, they’re going play the blame game. Twitter just takes it to another level.

Martin Truex had zero success? He’s two-time Busch series champion. He’s a talented racer who for several years had to deal with setbacks not of his own making. I guarantee you if you put Truex in a top notch Chevy or Ford he’d be just as good. Let’s not forget that Truex is beating other JGR Toyota drivers on a regular basis. I’m not saying Toyota doesn’t enjoy some advantages, but to use Truex’s history a driver to back up that conclusion is a poor argument.

Martin is not a bad driver and i dont think anyone is inplying that. But look at the results a toyota wins every week you just have to tune in to see which one like it matters. Poor chase elliot. He has a good race and is caught cheating i am wondering when mr hendrick is going to complain then things will change. Steve latartte needs to keep up. While a ford leads and a chevy is second and toyota third he states why is brad complaining a ford is first. He is a idiot. He said nothing while truex was leading the last 100 laps amd won by 7 sec. he is just another mouth piece for mascar and everyone knows it