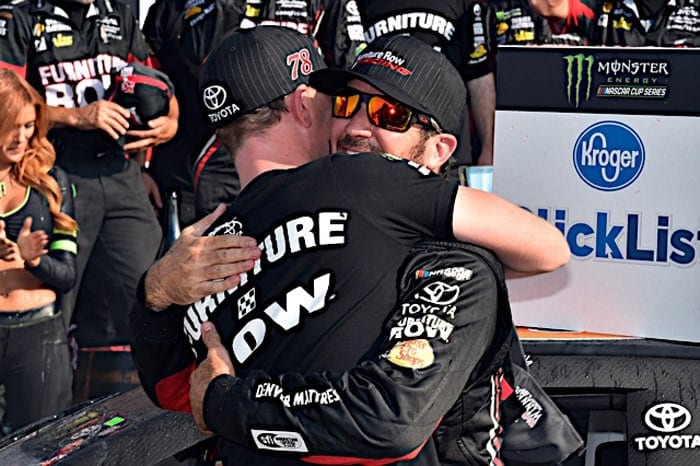 NASCAR’s version of the playoffs began Sunday at Chicagoland Speedway. But if you were looking for some kind of markedly different outcome than what you have seen for much of the season, you came away feeling a little blue. That’s unless you are a Martin Truex Jr. fan, of course. In that case, there are plenty of reasons to be happy. He made out like Joliet, Ill., natives Jake and Elwood in the Blues Brothers by delivering a captivating performance. The last stage of the race became the entire field chasing the No. 78, no one catching their rival until the goal of a checkered flag was complete.

Truex probably didn’t need a win to make it to the next round given his stage-win playoff points. But, to no one’s surprise, he was the class of the field on Sunday and quickly secured a second-round spot. Truex, even with a pit road issue, still drove his way through traffic and led 77 laps. You’d think he was on the way to the Cook County assessor’s office to pick up a big check rather than deliver one like Jake and Elwood did.

In the end, he proved too tough to beat.  It would be downright silly not to make Truex a Final Four favorite fighting for a title at Homestead.

The start of the playoffs in any sport should be one of the more exciting times of the season. But putting Chicagoland first in NASCAR’s playoff schedule has made the day anti-climactic. This 1.5-mile cookie cutter track just hasn’t produced many good finishes, regardless of the postseason field or the NASCAR handling package. Really, with the NFL in full tilt by the time this race starts, it’s very easy to just flip back and forth with the remote, checking to see if the same person is leading as usual. Unlike the journey to Chicago for Jake and Elwood, there usually aren’t many plot twists at this event.

The one refreshing Chicagoland story was Chase Elliott contending for the lead. Elliott has had a consistent season, deserving to make the playoffs, but he was rarely a threat to win for Hendrick Motorsports. On Sunday, while he didn’t have the speed of Truex or Kyle Busch, at least Elliott found his way to the front to lead for 42 laps. It gives him and fans of the No. 24 hope he can still make it to Victory Lane in 2017. Elliott is still looking for that elusive first victory and maybe he’ll have better luck at finding it than the Good Ol’ Boys did chasing down those Blues Brothers.

It wasn’t a good day to be a Busch Sunday at Chicagoland. Kyle was either the first or second-fastest car, but pit road issues left him two laps down. After that, a combination of Truex dominating and a lack of cautions kept him off the lead lap. It was excellent strategy by Truex to keep the only driver who had a chance to beat him a lap down and leaving Kyle with a 15th-place result.

Then, there was Kurt Busch, who ran inside the top 10 much of the day only to have a vibration. That caused him to pit under green and he eventually ended up two laps down in 19th. It wasn’t a total disaster for either driver, but Sunday’s one-race mediocrity left these brothers feeling a little blue.

The playoff posturing got underway early in the week when Ford driver Brad Keselowski tweeted about NASCAR allowing Toyota to have an unfair advantage. Kyle Busch replied back telling Keselowski, in no uncertain terms, to shut up (that’s the family version).

Whether you agree with Keselowski’s full assessment or not, he is correct in that the Toyotas of Busch and Truex Jr. are the cars to beat in the playoffs. If there was any doubt, the speed of Truex and Kyle Busch erased it by the conclusion of Sunday’s event. It’s just like when Ray Charles left no doubt about the value of those keyboards at Ray’s Music Exchange.

NASCAR’s pit road speed limit is necessary and important for obvious safety reasons. But it is kind of ironic there is a speed limit in a sport where drivers are asked to drive a car as fast as possible. The radar was out in force on Sunday at Chicagoland with 16 pit road penalties, including seven by playoff teams.

The good news is that there is time for some of them to climb out of their early hole. But the bad news is it’s not the way you want to start a possible championship run either. No driver or team wants to eliminate themselves for such a silly violation. Wheelmen like Austin Dillon, Kasey Kahne, Ryan Newman and Ricky Stenhouse, Jr. are in need of some speed or they will be done after the first elimination race in Dover.

With New Hampshire the next stop, it will be an opportunity for slow starters to make up some ground. The one in that group who has the best chance to rebound is Kyle Busch. So, he’s my pick to win this week. The deep sleeper underdog who you might not think about pick is Ryan Newman, who has always excelled on the flat one-mile oval. Newman was 27th in July but that was his only run outside the top 20 in his last eight New Hampshire starts.