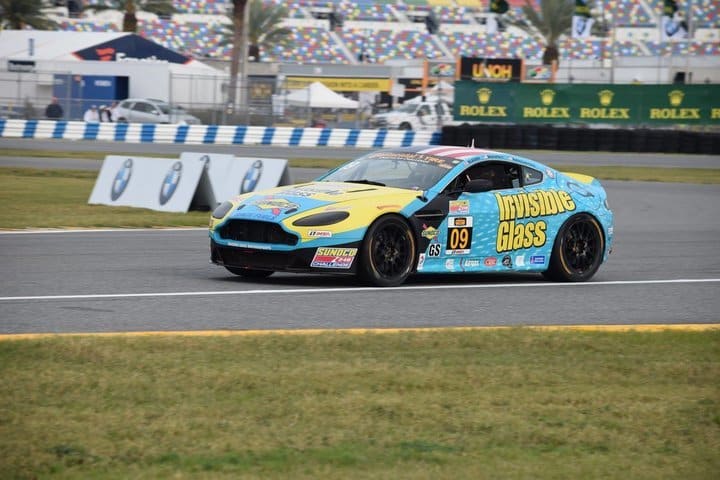 For the IMSA Continental Tire SportsCar Challenge, their second to last race of 2017 is the second and final endurance event of the year.  32 cars will race on Saturday afternoon for four hours on the 2.238-mile undulating road course.

In Grand Sport, there are a couple of extra teams entered.  Firstly, as previously noted in Pace Laps, Memo Gidley is making his IMSA Continental Tire SportsCar Challenge debut with new team Motorsport USA.  He’ll drive the No. 14 Maserati GT4 with Cavan O’Keefe and Mike McAleenan.

Both The Racers Group and Automatic Racing have entered two Aston Martins in Saturday’s race, meaning that a quartet of the loudest cars in the series will be doing battle.  For TRG, the No. 3 of Craig Lyons and Kris Wilson will be joined by the No. 71 of Gregory Milzcik and Brandon Davis.  For Automatic Racing, the full-time No. 99 of Al Carter and Russell Phillips will be joined by the No. 09 of Charles Espenlaub and Charles Putman.

Also, since Laguna Seca is an endurance race, teams are allowed to field up to three drivers.  Motorsport USA is one example.  KohR Motorsports is another as they have tapped Pirelli World Challenge veteran Nate Stacy to join Dean Martin and Jack Roush Jr. in the No. 59 Ford Mustang GT4.  For the 17-year old Stacy, this will mark his IMSA Continental Tire SportsCar Challenge debut.

In Street Tuner, Murillo Racing was forced to find a replacement in the No. 56 for Jeff Mosing after Mosing was ruled out for the year due to a back injury.  The team has tapped Justin Piscitell to drive the No. 56 alongside points leader Eric Foss.  Piscitell is also entered in the Murillo Racing No. 65, but it remains to be seen if Piscitell will drive both cars.  It should be noted that Piscitell would only be eligible for points in the car he starts.

Otherwise, changes are minimal.  The Mazda Raceway Laguna Seca 240 is set to roll off at 5 p.m. EDT Saturday.  It will be streamed live at IMSA.com and FansChoice.tv.