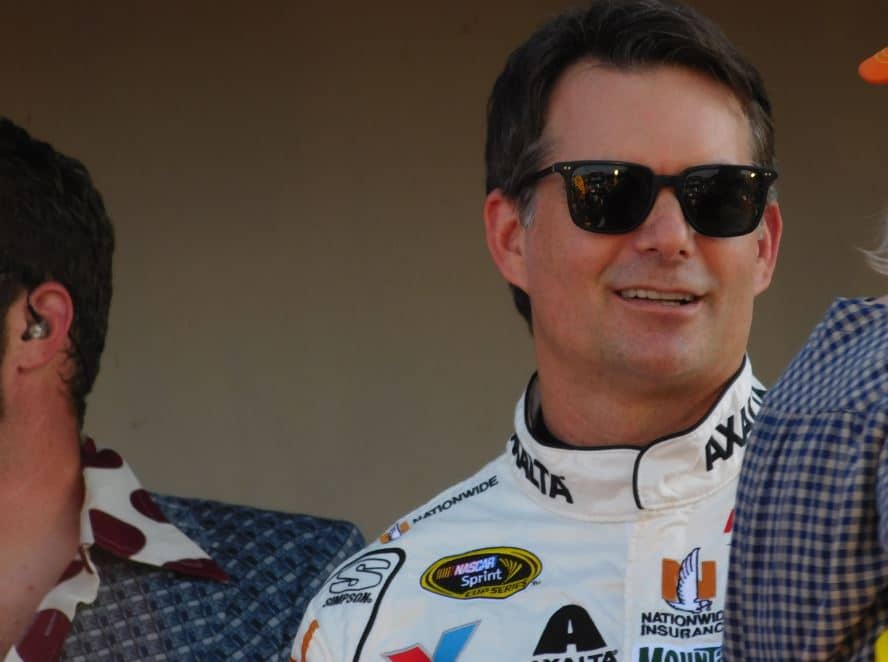 The playoffs have started in NASCAR; the IndyCar season is over; and Formula 1 is about to begin its drive home.

Happiness Is… Gordon.  Jeff Gordon has been out the sport for two years now (sort of), having joined the madness of the FOX broadcast team and attempted to contribute a sensible voice.  When his obligations with FOX end at the midpoint of the seasons, Gordon seems to turn into an itinerant fool, wandering wherever his peripatetic heart takes him.  That may not really be the case as it seems that sponsor obligations are still part of his life.

Great experience at the @F1 #SingaporeGP thanks to @AxaltaRacing & @MercedesAMGF1. Congrats on the win! pic.twitter.com/86vsU3lmXw

With that being noted, Gordon popped up in Singapore for the Formula 1 Grand Prix this past weekend, as a guest of Axalta.  He was shown in the pits of race winner Lewis Hamilton, which really isn’t much of a surprise as the two have fostered some sort of relationship and Hamilton sat in the No. 24 pit for the last race of Gordon’s career at Homestead.  Must be a decent life to wander the world watching races.  His busy, lush, lifestyle aside, there’s perhaps another reason to recognize Gordon here.

Has anyone else noticed since he retired that Hendrick Motorsports just doesn’t quite seem to be the same dominant company?  Is it possible that the veteran had the ability to shake down a car better than his teammates and thus provide better insight for making their cars fast?  This type of intuitive talent often gets overlooked as the information and engineering age has taken over, but Gordon knew some stuff.  A driver doesn’t luck their way into 93 wins.  A couple, perhaps, but accumulating those kinds of statistics requires a sense that when implemented with a stellar crew chief becomes masterful.  Even Jimmie Johnson’s stats have begun to lag since Gordon departed, and note that the No. 48 won the title last year after Gordon returned to the team for a bit.  This may seem like one of those, maybe/maybe not kinds of things, but it seems more maybe than not.

Happiness Is…Newgarden.  To the 12 of you who watched the IndyCar finale from Sonoma on Sunday, IndyCar thanks you.  What a terrible day to host the final race, with the NASCAR playoffs starting and the NFL diving into its season.  IndyCar has been the stepchild that a newly married father pays lip service to but usually just tosses a ball to and says, go play.  The series viewership numbers indicate that the sport is increasing its reach but the gains come in small doses, not sweeping ‘check out those numbers’ kinds of ways.

So it may not be a surprise that most people missed the fact that IndyCar crowned its first American champion since 2012 when Ryan Hunter-Reay won it.  Josef Newgarden earned the right to hoist the Astor trophy and in doing so became youngest something or other – does it even matter?  What does matter is that the series has a marketable young driver, who in his first year with Penske displayed and capitalized on his talents and looks set to be a star of the series.  While the ‘murican factor may not be a huge deal, it is a big one as one of the concerns that surrounds the series is that it is ostensibly filled with foreign-born drivers and thus doesn’t appeal to the US fanbase.  In addition, and no offense to RHR, but Newgarden exudes more star power and an enjoyable exuberance that make his championship win all the better for the sport.

Will IndyCar find ways to use Newgarden to grow the sport?  That would seem to be the hope and there’s certainly the prospect that he may appeal to the Millennial and Igen crowds (well, those that actually follow racing).  Contrast that with the fact that Chip Ganassi Racing will be dropping from four cars to two in 2018 and there’s an interesting contrast in narratives.  For now, Newgarden’s story is a friendly one while also being a likely harbinger of things to come.

Happiness Is…Hamilton.  Let’s get in the wayback machine and return to the Formula 1 Hungarian Grand Prix.  Sebastian Vettel had just won the race and appeared to be showing the return to form that so many fans in F1 have desired.  Any time the prancing pony from Marussia is leading the standings, it’s a good thing.  The summer break fell after that race and everything seemed to be in place for an interesting title fight – the kind where Mercedes may finally endure their comeuppance, or at least be forced to perspire.

Fast forward to Sunday in Singapore.  Since returning from the break, Lewis Hamilton has swept the races and now leapt ahead in the standings, taking a 28-point lead on Vettel.  He’s earned poles, led laps, showed dominance, and also been lucky – as evidenced by Hamilton being gifted the point in Singapore owing to basically everyone else in front of him deciding to tango with their cars to a less than melodic tune.  The carnage allowed Hamilton to lead and control the race, never facing pressure from Daniel Ricciardo of Red Bull, who was supposed to have the fastest car, or Hamilton’s teammate, Valtteri Bottas.

A championship drive needs a goofball, fortunate,  win and the Singapore GP sure seems to be just that for Hamilton.  That is not to say that Hamilton has the title wrapped up, but rather to say that he’s definitely in the process of putting it in the box and choosing the paper and bow.

I had entertained the idea that the slump in HMS’s dominance might be related to Gordon’s departure, but it’s impossible to prove.

IMO If it wouldn’t had been for Gordon Johnson wouldn’t have near the championships he does. Remember Knaus started out with the 24 team early on so a lot of credit should go to Gordon and Evernhan for the 48 team’s success. Still have a difficult time comparing Johnson’s greatness wth the likes of Petty and Earnhardt.