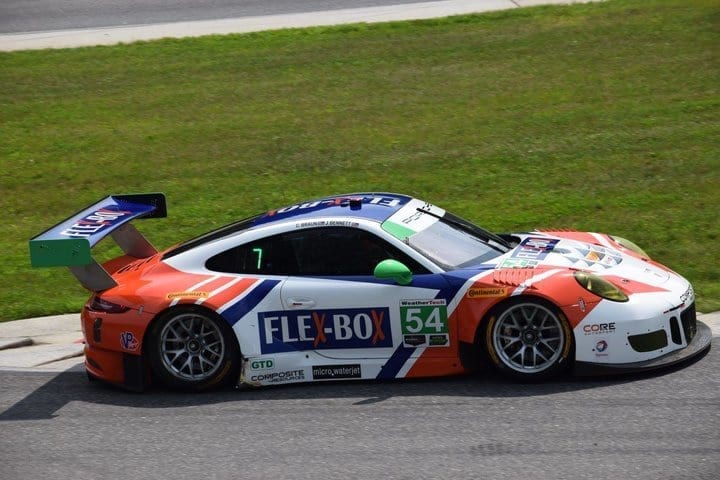 On Thursday morning, CORE autosport announced that the No. 54 team that currently competes in the IMSA WeatherTech SportsCar Championship’s GT Daytona class will move up to Prototypes in 2018.  The team has acquired an ORECA 07-Gibson and will race it full-time next season.  Full-time drivers Jon Bennett and Colin Braun will continue as drivers.

On the team’s Twitter page, they made good use of their sponsor/sister company Composite Resources to make their announcement.

Our friends at Composite Resources helped us illustrate what we're working on for the 2018 @IMSA season… pic.twitter.com/524DiuGT7S

Bennett, who also owns the team, is quite pleased about returning to prototype racing.

“Our start at CORE was with prototypes in 2010,” Bennett stated.  “It feels good to get back to our roots and [we’re] progressing as a team.  We’ve spent the past season watching with interest how the competition and budgets would shake out in the re-vamped Prototype category. We are encouraged to see the growth and competitiveness in this premier class and look forward to our debut at the 2018 Rolex 24 at Daytona.”

Prior to moving to GT Daytona, CORE autosport spent six seasons racing in the Prototype Challenge class.  The team won the 2011 and 2012 American Le Mans Series LMPC championships, along with the 2014 and 2015 TUDOR United SportsCar Championship PC titles.  In that time, CORE autosport teams won 20 races.

The team decided to move to GT Daytona in the middle of last season.  As a result, they cut their schedule short in order to prepare.  Unfortunately, GT Daytona has been a struggle for the CORE autosport team.  Currently, Bennett and Braun are joint 19th in GT Daytona points.  They have the least number of points of anyone who has competed in all 10 races to this point.  Their best finish has been seventh in class at Road America in August.

CORE autosport’s announce marks the third new full-time prototype on the grid for 2018, following up the Acura Team Penske two-car effort.  With the PC class disappearing at the end of the season, the remaining teams there could also move up.  SportsCar365.com reported a couple of weeks ago that BAR1 Motorsports could move up to the Prototype class.  Starworks Motorsport and Performance Tech Motorsports are working on potential moves of their own.