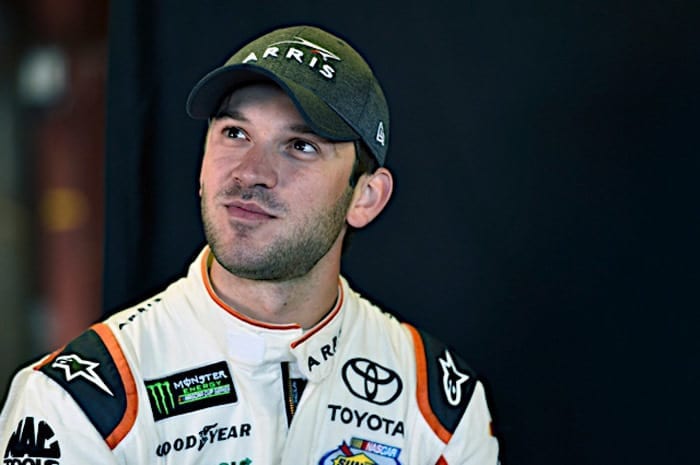 DraftKings’ daily fantasy NASCAR heads to New Hampshire Motor Speedway this weekend for the ISM Connect 300. This race marks the second event of the first round in the Monster Energy NASCAR Cup Series playoffs. The green flag flies Sunday afternoon at 2:00 p.m. ET on NBCSN.

Cars will hit the track on Friday at 11:30 a.m. for first practice, followed by Coors Light Pole Award qualifying at 5:15 p.m.

This week’s fantasy forecast is brought to you by DraftKings, the No. 1 platform for Daily Fantasy Sports. You can jump in on all of the daily fantasy NASCAR action at New Hampshire this weekend by signing up at this link for a free entry into one of this weekend’s contests. All you have to do is make a $5 deposit to get started!

Busch had a six race top-10 streak come to an end last weekend as the decision to swap pit crews with the No. 19 team completely backfired. The crew made multiple mistakes in race one of the playoffs at Chicagoland Speedway, issues which caused Busch to fall off the lead lap.

From that point on, he was not able to recover from substantial lost track position. He finished 15th at Chicago despite leading the most laps (85) during the race.

Looking ahead, though Busch has a great chance to recover this weekend. He has two career wins at New Hampshire and 13 top-10 finishes. He has led laps in three straight races, including over 90 laps in two of them.

Busch should be extremely motivated to bounce back from last weekend’s fiascoes. Never bet against an angry Kyle Busch.

Truex is the class of the NASCAR field right now. He added another win last weekend which further guarantees himself a deep run into the playoffs. Truex has been a DraftKings dominator in what seems like nearly every race this season.

The five-time Cup winner started on the pole at Loudon in July and led 137 laps en route to a third-place finish. He has led over 100 laps in three straight NHMS races, all in starts from third or better. If Truex starts up front this weekend, he is a lock for the top dominator pick.

Hamlin’s late race surge back in July secured his third career NHMS win and a berth into the playoffs. The Joe Gibbs Racing veteran has been extremely successful here over his career. Hamlin ranks atop the leaderboard among active drivers in average finish (10.0) through 27 starts. He also won the last race held here in July, leading 54 laps after starting inside the top 10.

Hamlin picked up his fourth straight top-five finish last weekend, a run which includes that “encumbered” win at Darlington. He has been red hot the past 10 races, earning an average finish of 5.9. All the pieces are falling into place with the No. 11 team as he his primed for a great playoff performance at New Hampshire.

Kenseth has the most top-five finishes (11) among active drivers at NHMS. He also ranks second in top-10 finishes (20), one behind Jimmie Johnson. The fourth-place result in July was his worst performance at the track in four races, a stretch that included two wins and a second-place nod. That makes this track his best on the circuit over the past two seasons.

Kenseth bounced back from a disastrous Richmond race with a ninth-place finish in Chicago. The 2003 Cup Series champion may have made it into the playoffs on points alone, but he is a favorite to win this weekend.

Busch is another driver heating up at the perfect time, earning three top-five finishes in the last four races. There has been a noticeable difference in performance from the No. 41 team over the past month and a half.

Only a simple mistake kept the momentum from continuing at Chicagoland. Busch was running inside the top five most of the race last weekend but a pit road penalty during a green-flag pit stop ended any hope for a solid finish.

Busch ran eighth in July at New Hampshire. He should be a lock for another top-10 finish.

Suarez finished sixth at Loudon earlier this season, tying what was then his career best Cup Series effort at Dover. Since then, Suarez has added four more top-10 efforts and a third at Watkins Glen, attempting to match rival Erik Jones in their battle for Rookie of the Year. Daniel has progressed at a high rate over the season, evolving into a consistent top-15 driver.

While Suarez is not a part of the playoffs, he still has plenty to race for. Another good finish this weekend would continue to close the gap in the ROTY competition after a rough race for Jones at Chicagoland.

A 25th-place finish last weekend put Stenhouse in a situation where he must be more aggressive to advance into the second round of the playoffs. Stenhouse is in the lower tier of the final 16 when it comes to equipment, so he will need to create his chances.

This Roush Fenway Racing driver will be boom or bust at New Hampshire because he is known to walk the edge when it comes to racing aggressively. Stenhouse has three top-15 finishes in the last four races at the one-mile oval. However, he’s also wrecked here as recently as 2014.

A top-15 result should be expected from Stenhouse this weekend, especially if he is fast off the trailer. Just know the risk you take before committing here.

DraftKings is still sleeping on Newman. He is the second-lowest priced driver in the playoffs, $200 above teammate Austin Dillon. That’s surprising because the veteran has been a consistent top-15 car all season long, a trend that will not stop this weekend. At the last two short track races (Bristol and Richmond), he finished sixth and third.

Newman’s career average finish at NHMS is 14.0 through 31 races. That’s a large sample size, showcasing just how consistent he really is. A 27th-place result in July was his worst in eight races at the track.

Newman won’t be your winner, but expect him to be the top bargain choice once again. 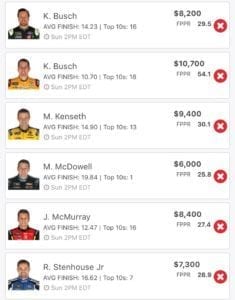